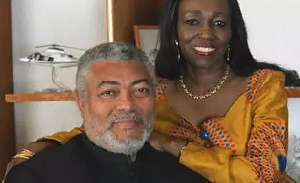 She said Mr Rawlings supported the brawl for women’s right in the country when he was the head of state and even after leaving office.

Mrs Konadu Agyemang Rawlings said these in a tribute read in her behalf by one of her daughters, Princess Amina Agyemang Rawlings at the final funeral ceremony at the Black Stars Square on Wednesday, January 27.

“With your help and support we were able to fight for the rights of women a reality,” Amina said on her behalf.

The biography of the late Flt Lt Jerry John Rawlings which was read by one Eric Gbeho during the final funeral ceremony at the Black Stars Square in Accra revealed that the late former President worked to bring governance close to the people.

He added “He encouraged citizens to participate in local governance.

The 4-day funeral ceremony started Sunday, January 24 which a requiem mass service held for him.