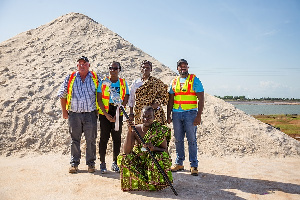 Speaking at an event in Ada, he noted that the mining of the salt will boost employment in the community.

He expressed excitement with the progress of work so far, adding that the management of Electrochem has exceeded their expectations.

He, therefore, urged the youth of the communities in the catchment areas of the project to be united and diligent with their work to make the most out of the employment opportunities that the Songor salt project will bring.

The Paramount Chief also used the occasion to entreat residents to use dialogue to resolve issues ." We'll ensure we leave a long-lasting legacy with the project as chiefs." Meanwhile, the founder and Chief Executive Officer of McDan Group of Companies, Daniel McKorley also indicated that Electrochem Ghana Limited will employ over 5,000 youth within Ada and its environs to mine salt in the Songor lagoon.

Mr McKorley further said that Electrochem has been able to employ about 1,000 indigenes within three months and they're working on the concession.

He said that no youth will be required to tender any certificate before employment. "You'll only be asked which clan you belong to."

According to Mr McKorley the Songor salt project will produce about 500,000 bags of salt every year. "We've been tirelessly working day and night for four months. People think it'll take us five years to finish the project but within two years we'll finish. Currently, we're working on the community pans, we're refurbishing and doing various engineering works on the others, " he added. Mr. McKorley mentioned that water will soon flow into the Avakpe lagoon once the reservoir was ready, stressing that "I want to assure the people of Avakpe that their pans will be filled with water soon."

"That's why we're here to show the chiefs and elders how messed up the Songhor lagoon has become.

"So we're pleading with the community to give us access to it for the well-being of Ada," he added.

In order not to deprive the indigenes of their livelihood when moved away from the songhor lagoon, he further explained that his outfit decided to build community pans for Ada community where they can mine salt. "We've told the people of Ada that we're ready to buy their mined salt at the market price, however, we won't compel them to do so; they can sell it if they have a better market elsewhere."

The areas in Ada where the salt mining will be undertaken are Bonikope, Toflokpo, Avakpe and Kposem. The land for the mining is 42,000 acres.