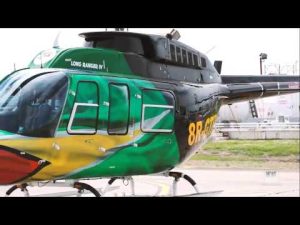 A helicopter belonging to Air Services Limited (ASL) Tuesday morning made a precautionary landing on a road due to technical difficulties.

Director-General of the Guyana Civil Aviation Authority (GCAA) Retired Lt. Colonel Egbert Field confirms that the pilot landed the aircraft on a road after it began vibrating. “It landed safely on a road,” Mr. Field told Demerara Waves Online News.

He said a relief helicopter went in to bring out the pilot who was the sole occupant.

The GCAA Director General says the chopper would be allowed to fly again after a number of steps is taken. “A relief chopper went in to bring out the pilot who was the sole occupant. It will be inspected by the GCAA when the company has done its checks before being allowed to fly from the location of landing,” he said.

Other sources say that at about 10 AM Tuesday, the Bell 206 L helicopter, bearing registration marking 8R-GTR, conducted the forced landing shortly after departure from Toraparu.

The helicopter was captained by Akeem Stoll.