Amaila Falls project could go back to tender – VP Jagdeo

CONSTRUCTION for the US$700-million Amaila Falls Hydropower station (AFHP) could possibly go back to tender, as the current executing company, China Railway Group Limited (CRGL), is having difficulties honouring its commitment to the Build-Own-Operate-Transfer (BOOT) contract that it signed.

The government maintains that it is holding the company to the BOOT bid they submitted. If an amicable arrangement cannot be met, the government is willing to retender the project.

This is according to Vice-President (VP) Dr Bharrat Jagdeo, who gave an update on the situation at a press conference on Monday at the Office of the President.

The Vice-President explained that the company has requested to change the BOOT contract’s arrangement to an Engineering, Procurement, and Construction (EPC) contract.

“We have been in discussion since November last year. The negotiations are very difficult. As of April 2022, they are having a hard time doing the BOOT contract and want EPC financing. We’re still trying to get them to meet the commitment that they bid for [but] for the last six months we have been struggling to reach the conclusion; we will have to give a deadline [on negotiations],” Dr Jagdeo related.

Under an EPC, CRGL would be responsible for all the engineering, procurement, and construction activities and deliver the completed project to the government within a predefined time and cost. However, that would require the government to source the financing, whereas under the BOOT model the project is financed by the contractor. 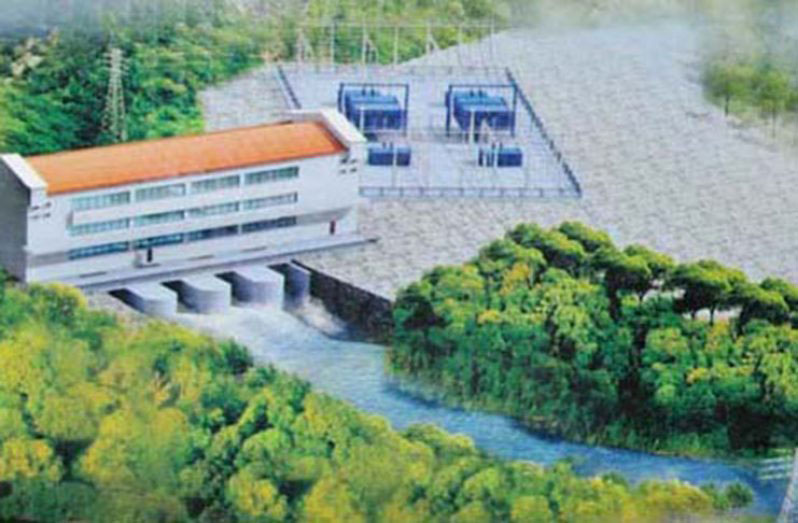 The artist’s impression of the Amaila Falls Hydro Project

Dr Jagdeo affirmed, however, that notwithstanding the delay, the government would still be moving forward with the project, albeit with a pushing back of the timeline.

“If we can’t get it done under the BOOT, we will not be able to conclude the EPC finance model. We are stuck with the possibility of having to retender. That might be a bit of a setback but on the other hand, we are moving full steam ahead [with doing the project],” Dr Jagdeo said.

The AFHP project had been expected to commence construction in 2022 and be completed in 2025, and when completed, add 165 megawatts (MW) of energy to the national grid.

Last year, the Ministry of Finance had reported that Cabinet had granted its ‘no-objection’ for the Office of the Prime Minister to engage the CRGL to construct the AFHP, based on the BOOT model.

Four companies submitted proposals, and CRGL was identified as the most’ capable partner’ by the Evaluation Committee, following a rigorous evaluation process,

Through the project, the company will supply electricity to Guyana Power and Light (GPL) Inc. at a cost not exceeding US$0.07737 per KWH, and provide the entire equity required by the project and undertake all the associated risks with the project.

This follows the publication of a request for proposals by the government in various national newspapers from July to August, 2021.

The AFHP was first identified in 1976 by the Canadian company “Monenco’ during an extensive survey of hydroelectric power potential in Guyana. Various studies have since justified and strongly supported the construction of the AFHP.