Wednesday, June 1, has been marked as the first day of the deciding round in the West Indies Championship 2021/2022 which takes places at three venues across Trinidad and Tobago. Tagenarine Chanderpaul has faced 170.3 overs for the season – the most by any batsman. (Photo credit: Daniel Prentice/ Wired868)

The 4-day match tournament will see the defending champion and current leader, Barbados Pride, go head to head with the team in the cellar, Windward Islands Volcanoes, at the Diego Martin Sporting Complex, Diego Martin.

This fixture is quite fortunate for Pride which means their chances of retaining the title have sky rocketed.

Twin Islands’ team, Red Force, who are currently fourth in the point standings oppose the third place holder, Guyana Harpy Eagles, at the Queen’s Park Oval in Port of Spain. 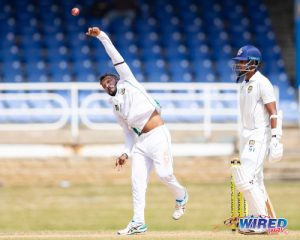 In the other match, the current second place team, Leeward Islands Hurricanes will battle the Jamaica Scorpions, who occupy the fifth spot at the Brian Lara Cricket Academy in Tarouba. All matches are scheduled to bowl off at 10:00 hrs daily.

Red Force leads the second half of the table with 47.2 points from two wins and as many losses while Scorpions are fifth with 37.8 points after securing a win, a draw and two losses. Volcanoes are dormant with 21 points from four consecutive losses.