Guyana ready to remove all obstacles to development with Barbados

PRESIDENT Dr Irfaan Ali has said that Guyana is prepared to remove all obstacles impeding development with Barbados.

Guyana, by removing those obstacles, would create myriad opportunities for citizens of both nations.

The Head of State related his intention, over the weekend, during a site visit to the proposed location for the Guyana-Barbados Food Terminal in Lears, St Michael, Barbados.

“I want to assure Prime Minister [Mia] Mottley and the people of Barbados that you have a reliable partner in Guyana. We are ready to remove all impediments to accelerate our plans together, to expand our production together—to expand the opportunities,” President Ali said.

He related that the aim of expanding and improving opportunities and cooperation between the two countries is to enhance the livelihoods of citizens of both countries.

The Head of State said: “Right after this visit, we are going into a working session to not only look at solutions but to set timeframes and deadlines. The electorate holds us accountable at the end of a period. We have to hold people accountable too.”

President Ali said, too, that he was “nothing short of impressed” with the type of work that had been done so far, especially with the motivating drive of the private sector. He credited that to the type of leadership and aggression that Prime Minister Mottley and her Government demonstrate as it relates to food security.

In addition to the food terminal, Barbados was also developing another catchment pond right next to the facility. That project, the President said, provided additional opportunities which include the production of shrimp, tilapia and catfish among other seafood. 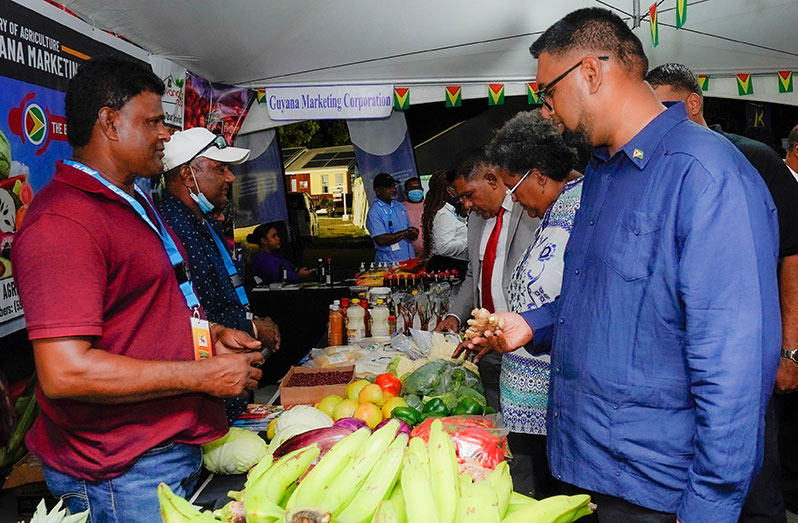 Dr. Ali said that the technical teams of both countries were working together on bringing young people on board through research and development and science and technology.

At the launch of Agro Fest 2022, last Friday in Barbados, the Guyanese Head of State had related that the food terminal will create an international transhipment hub, which would result in food moving from Barbados to other Caribbean islands and even to Miami.

DIFFERENT MINDSET REQUIRED
The President emphasised that to achieve those progressive results, a different mindset was needed.

“If we continue the old mindset we can’t get anywhere. The new mindset requires us to view things differently and this is beyond a Guyana/Barbados initiative… We want to create a model to demonstrate to CARICOM that we can work in the context of CSME,” President Ali said.

The President added that for that to happen, Guyana and Barbados have to lead the way in changing “the way we think, the way we relate” as well as making changes on the political and policy-making levels and the public service, bureaucratic and private sector levels.

“We can keep talking as a people in this region that we can do better, that we can eat local and then we don’t want to participate in the process of eating local. So, all of us have a role and I’m very, very pleased. I think Barbados is developing a model here,” Dr. Ali said.

Prime Minister Mottley also made brief remarks. She said that the food terminal would allow the country to store at least 45 containers and will allow for packing, processing and storage. It was also expected to allow for blast freezing for seafood production and processing.

President Ali was joined by the Minister of Agriculture, Zulfikar Mustapha; the Minister of Tourism, Industry and Commerce, Oneidge Walrond and other government representatives.