According to Director General (ag) of the CDC, Major Loring Benons, the programme was designed to cater to gaps identified in Guyana’s National Oil Spill contingency plan, approved in August of 2019.

The training programme, which lasted from June 2021 to April 2022, was made possible by the U.S. Department of State’s Bureau of Energy Resources, through the U.S. Coast Guard.

“The exercise sought to identify strengths, weaknesses, and lessons learned to enhance the plan, thereby preparing all stakeholders to be ready to respond effectively and efficiently in an emergency. It was conducted in a real-time environment, where the computer was able to simulate reality by presenting complex and realistic problems that require critical thinking, rapid problem solving, and effective response by training persons from all various agencies,” Benons said.

He noted that the exercise had left the ranks more equipped to deal with any situation that may arise related to oil spill preparedness responses.

Meanwhile, U.S. ambassador to Guyana, Sarah-Ann Lynch, stated that the U.S. supports the responsible development and utilisation of natural resources; is aware of the necessity of disaster preparedness responses, and is committed to lending support to Guyana in training to boost the capabilities locally. 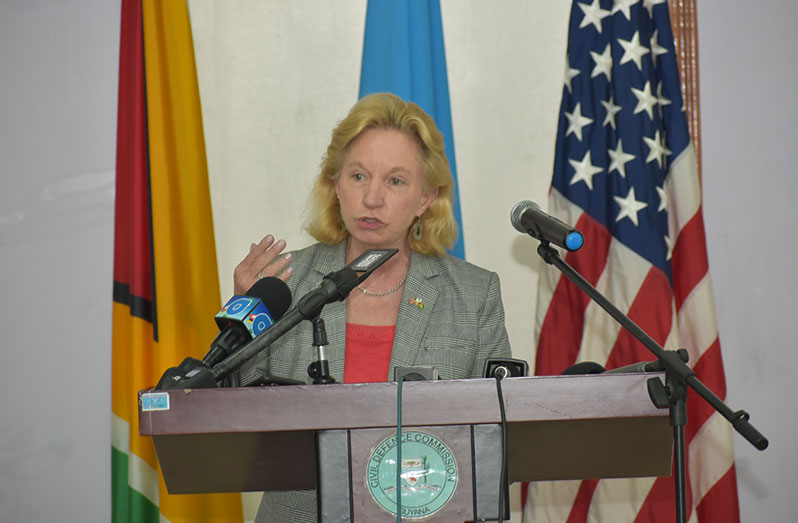 She noted that the oil and gas sector is making transformational development possible, with new investments in various areas, including infrastructure and social services, directly stemming from revenues and potential revenues of the industry.

“The United States supports the responsible development and utilisation of natural resources. Therefore, we positively responded to a request from the Government of Guyana to provide essential training to members of the CDC and the National Oil Spill Committee, to strengthen Guyana’s National Oil Spill Contingency Planning. We are committed to providing the tools to Guyana to enhance its capacity in this area, and it is a sign of our commitment to regional security and environmental protection,” the envoy noted.

She noted that the training also emphasised the importance of safety, security, and environmental protection.

The U.S. Ambassador stated that this training would not be a one-off activity relating to her government’s commitment to supporting Guyana, noting that the U.S. Coast Guard’s Office of International Affairs and Foreign Policy offers several virtual and in-person training opportunities that Guyana can pursue to continue to build local expertise.

Building on the U.S. support to Guyana in national disaster management, Ambassador Lynch on Monday donated several pieces of equipment to the Civil Defence Commission to utilise during Guyana’s rainy seasons, which have seen flooding in several communities across the country.

Tents, mats, sleeping bags, cots, tables, and generators, which the CDC can distribute to victims of natural disasters, were donated to the CDC on Monday.

“The CDC excels in providing assistance countrywide whenever Guyanese citizens suffer from flooding’s effects. To further bolster the CDC’s abilities to help Guyanese citizens, the U.S. Embassy, through our Military Liaison Office, today marks the donation of equipment, including these items are donated under U.S. Southern Command’s Humanitarian Assistance Program,” the U.S. Ambassador stated.