Kaieteur News – To truly understand the premium quality of Guyana’s oil, one only has to hear the recent assertions of Hess Corporation’s Chief Executive Officer (CEO), John Hess who participated at the Bernstein’s 38th Annual Strategic Decisions Conference. 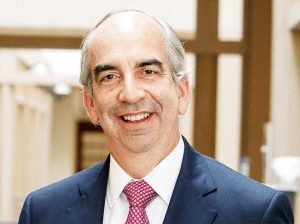 The Hess boss explained that about three years ago, investors were not in agreement with their approach to constantly investing with no meaningful or significant dividend being returned. They said out rightly to have their money returned and they will leave. But to keep them from walking out the door, Hess explained to them the crown jewel which they hold in their portfolio and how that asset is tied to one of the best oil contracts the world has ever laid eyes on.
Hess said, “ Three years ago, we were criticized for investing; a number of investors stopped investing and said just ‘give us the cash back,’ but we convinced them using Guyana. We said look, ‘We have high returns specifically in Guyana and we are going to benefit from that investment because as we grow the resource we grow the cash flow.’
Hess then charmed his shareholders with the economics attached to Guyana’s oil. The CEO said: “every ship at US$65 Brent adds US$1B a year to Earnings before interest, taxes, and amortization (EBITA) and as a consequence our cash flow is 25 percent compounded each year for the next five years and quite frankly with more ships, we can actually go out to 2030.”
He added, “Part of that strategy is also going down the cost curve, our cost per barrel goes down 25 percent to US$9 per barrel by 2026; our break even as a company will be US$45 Brent for 2026 and at the end of the day that cash flow growth will compound where we are growing intrinsic value but also start to return cash along the way as well.”
With such outstanding financial prospects he told shareholders Hess is no doubt destined to grow dividends. He said too, that Guyana is an industry leading durability story given it’s over 25 discoveries in the block and the fact that the partners intend to drill 18,000 feet deeper to unlock more oil that has been trapped for ages. With Guyana in its portfolio, Hess said production is poised to grow by 10 percent a year. Hess and its co-venture partners currently have four sanctioned developments on the Stabroek Block.
The Liza Phase 1 development, which began production in December 2019 utilizing the Liza Destiny floating production, storage and offloading vessel (FPSO) with a production capacity of approximately 120,000 gross barrels of oil per day, recently completed production optimization work that expanded its production capacity to more than 140,000 gross barrels of oil per day.
The Liza Phase 2 development, utilizing the Liza Unity FPSO, began production in February 2022 and is expected to reach its production capacity of approximately 220,000 gross barrels of oil per day by the third quarter. The third development at Payara is ahead of schedule and now expected to come online in late 2023 utilizing the Prosperity FPSO with a production capacity of approximately 220,000 gross barrels of oil per day.
The fourth development, Yellowtail, is expected to come online in 2025, utilizing the ONE GUYANA FPSO with a production capacity of approximately 250,000 gross barrels of oil per day. At least six FPSOs with a production capacity of more than 1 million gross barrels of oil per day are expected to be online on the Stabroek Block in 2027, with the potential for up to 10 FPSOs to develop gross discovered recoverable resources which total almost 11 billion barrels.