Leading up to the International Day of Yoga celebrations, the High Commission of India in Guyana facilitated a curtain-raiser session with the ranks of the Guyana Police Force (GPF). 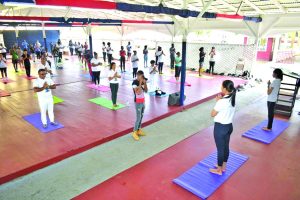 In the Police Officers’ Mess Annex, about 80 officers from the GPF attended the yoga session, which saw participation from Indian High Commissioner, Dr KJ Srinivasa; Deputy Police Commissioner Calvin Brutus and Special Branch Head Errol Watts.
While addressing the Police Officers at the yoga session, the High Commissioner shared information about yoga, its benefits for mental, spiritual and physical well-being and its relevance, and how people, especially frontline workers, including Police Officers, across the globe, have benefited from practising yoga during the COVID-19 pandemic.
The yoga session was organised with the aim of extending the benefits of yoga to the ranks in these testing times.
“Yoga helps immensely in controlling mental stress and tension as well as to keep them healthy and fit.  Thus, India’s gift of yoga to humankind all over the globe has truly been a lifesaver,” said the High Commission in a release.
In December 2014, the United Nations General Assembly adopted a resolution sponsored by 177 member nations unanimously proclaiming June 21, the longest day in the northern hemisphere, as International Day of Yoga.
Since then, June 21 has been celebrated as International Day of Yoga every year.  Yoga is a system of holistic living, having its roots in Indian tradition and culture. Yoga has transcended the barriers of race, religion and culture and has become a global movement. Yoga is essentially a mental and physical discipline based on an extremely subtle science which focuses on bringing harmony between mind and body. It is an art and science for healthy living.
The High Commission of India will also be organizing one more curtain-raiser event for the International Day of Yoga with the Guyana Defence Force (GDF) on June 8.
The main event will be held on June 19, at the Everest Cricket Ground in Georgetown where Guyanese dignitaries are expected to attend along with the diplomatic corps, students, and others.
On June 21, a yoga event will be held at the Indian Arrival Monument in Palmyra, Berbice. This event has been selected to be telecast live across the world as part of an initiative of the Government of India to ensure live broadcast of 24 hours of yoga on International Day of Yoga 2022 from iconic locations across the globe in a “Yoga Ring”.
The High Commission of India has invited all Guyanese to join these celebrations. These events will be live broadcast on the Facebook pages of the High Commission of India and the Swami Vivekananda Cultural Centre as well as on prominent local TV channels.