UNDER the theme “Universal Social Protection to End Child Labour”, the Ministry of Labour, on Friday, held a walk in observance of World Day Against Child Labour which is observed on June 12.

At a brief ceremony outside the Ministry’s Brickdam Road, Georgetown office, Gillian Burton-Persaud, Ministerial Advisor at the Labour Ministry, said the Government of Guyana has been doing all it can to ensure that children, as the most vulnerable in society, are taken care of.

“…they need to be in school, they need to have an education, they need to be able to dream their dream and to realise those dreams.
“But, we know that there are predators out there who are just waiting to steal and snatch away those dreams, those visions and those hopes from those children from becoming a reality,” Burton-Persaud said.

She related that the agency had the responsibility and mandate to monitor and police the system.
“We at the Ministry of Labour are ensuring that we are a part of all that has to be put in place to ensure that our children are safe,” she said. 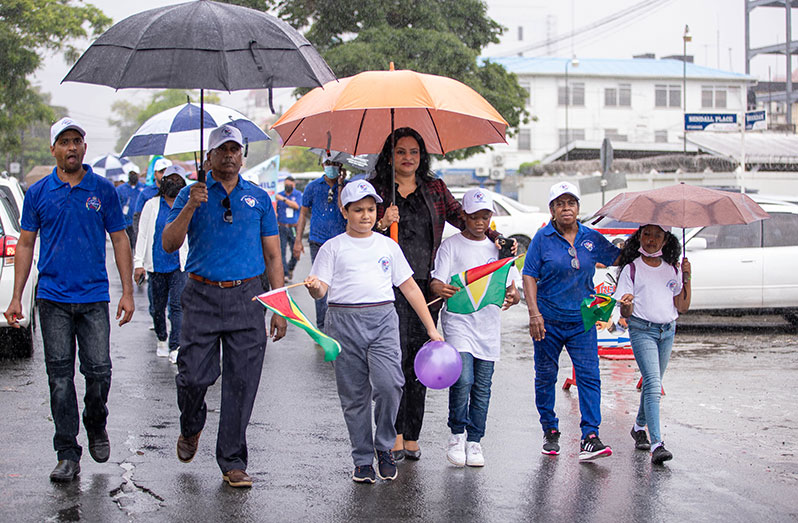 Additionally, she said that the walk had participation from many representatives of sister agencies who work to eliminate child labour in Guyana.
Meanwhile, Minister of Human Services and Social Security, Dr Vindhya Persaud, who also participated in the walk, told the gathering that sheltering and protecting children was a privilege.

“It is a privilege and honour to be able to ensure that children live in a world where they are safe, secure, and free from many elements of ills, including child labour,” Minister Persaud said.
The Minister related that child labour continues to plague the world and the country, and it must be stomped out.

“It can only be stomped out if we are conscious of what it is and if we are very observant when we are out and about. And, more importantly, if we are very dedicated and ceaseless in our efforts to report it when we see it,” Minister Persaud added.

“Today, my call to you is to ensure that you are proactive in your efforts to stomp out child labour,” Dr Persaud charged, adding, “I know we live in a country where it is customary for children to be involved in chores and tasks around the home, nothing is wrong with that.

“But when it gets to a point where it is mentally, socially, physically, and in any other way harming that child and it becomes such a thing that the child is deprived of their basic rights to education, healthcare, and any other social protection response, then definitely, harm has been done to that child,” Minister Persaud explained.

She encouraged the children and young attendees to be familiar with the coverage and protection that the Laws of Guyana put in place for them and to report child abuse to the Ministry of Human Services and Social Security’s 914 hotline.