Mined out sand pits could be used for berry cultivation

PRESIDENT, Dr. Irfaan Ali, on Monday, said that the government has received proposals for the cultivation of grapes, strawberries and other berries in mined out sand pits along the Soesdyke-Linden Highway.

The President, in making this disclosure at the launch of Demerara Bank’s “Farmers’ Credit Line,” said that these proposals were made following Guyana’s inaugural Agri-Investment Forum and Expo.

The Head of State said that those offers came after investors saw the “ripe potential” to grow grapes, a fruit with high import earnings, locally.

According to Dr. Ali, the investors who are interested in utilising the mined out sand pits for the cultivation of these fruits will return in another few weeks to start work on this major project.

The country, and now international investors, have been keeping an eye on Devin Gillard, a resident of Glasgow, New Housing Scheme, East Bank Berbice, who is currently regarded as one of the first Guyanese to undertake a project for the growing of grapes locally. President Ali noted that the knowledge of this project has greatly drawn investors’ attention.

He said: “After the Agri-Investment Forum, we now have a proposal that will use mined out sand pits on the highway to produce berries, strawberries and all these things that we import, through science and technology.” 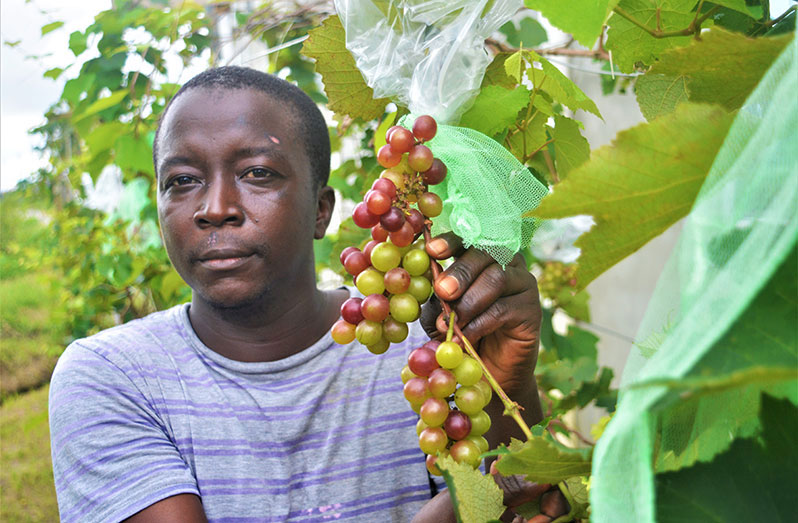 Gillard had told the Guyana Chronicle that prior to setting up his vineyard, he would have sought advice from agriculturalists, but was told that the fruit could not be grown in the tropics and could only survive in cool temperature areas.

He was determined to prove them wrong. After conducting extensive research, he discovered that the contributing factor for a successful grape harvest was the ph. factor of the soil. The soil ph.

is measured by the alkalinity or acidity of the soil. A ph. of 5.5 to 7.0 is generally recommended for grapes.

Despite criticism of his plan, Gillard, who has no formal training in agriculture, singlehandedly started his cultivation with a few grape cuttings brought by a friend from overseas. A plot of land at his Lot 649 Glasgow New Housing Scheme, East Bank Berbice home was prepared and from then, there was no looking back.

He had expected the flowering of the vines after 24 months but was pleasantly surprised that the vine flowered at just eight months, followed by bunches of red globe, a succulent seeded grape, the largest round berry of all grapes. They have a dark ruby red colour and are mildly sweet and flavourful when ripened.

In keeping with its vision to enhance the agriculture sector, the government in April 2022, granted Gillard approval for some seven and a half acres of land he had applied for to cultivate grapes almost immediately when he raised the matter with Vice-President Dr. Bharrat Jagdeo, who was part of a Cabinet outreach to Region Six.