I GREW up hearing coded conversations in our poetic Creole language, terms like, “He bright; ‘e got good qualifications, but he can’t fix a squeak pon ‘e bed.”
I later learnt that this saying had several meanings, but one of them had a literal interpretation that I have witnessed with some young adult males. If challenged to fix a cracked or broken bed board, they cannot mentally recognise a solution to the problem.

When I was in secondary school, you had to do woodwork and leathercraft, along with the academic timetable that included ‘Art and Reading’. I found these skills to later be useful tools during my bachelor days. By that time, the wooden structure had replaced imported metal beds. This soon required you to have the basic tools in-house, and to understand how to apply them.

Then there were those weird childhood jokes that adults made: “Duh last one look like de milkman pass deh.” This translated into the expectation that a young man should know, or needs to know, how to fix basic household predicaments, within reason. Electrical, mechanical or technical items should be transferred to a professional, once that person is separated from the ‘quacks’ (and there are plenty of those around, especially in the home-building business). This meant that our young men needed to understand the difference between the purpose of a mallet and a hammer, or someone else will have to address the obvious necessary manhood chore frustrations, which could lead to the “milkman” colloquialism. 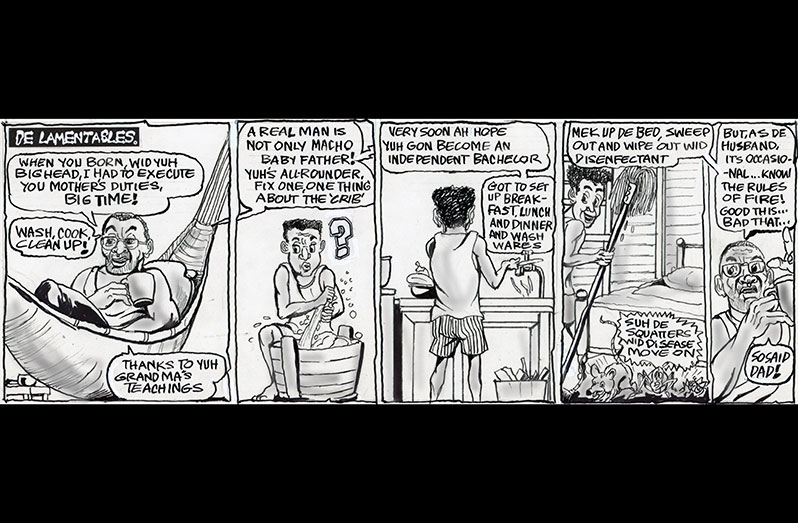 I had a friend who died some years ago, but before he passed, whenever he visited my home, he would always joke about what he perceived to be my being domesticated, because I was washing pots and plates.
On one occasion, I decided to close the door on this “domesticated tantalise”. I waited until he brought it up away from home.

This happened outside of the Metropole Cinema, and in response to his taunt, I asked him if it was reasonable to request baked fish and chicken rather than stewed, and have the wife in and out of the oven, then expect her to deal with the washing of the wares at the same time? And he took the bait and said, “Wuh wrong wid duh?”

If you can remember, at Metropole Cinema, most of the vendors were women. They turned on him; called him an idiot, a monster, and other names related to the milkman’s usual victim.
To his credit, this bit of wisdom was not taught to him; he was his mom’s only child. Meanwhile, I saw my Godfather, with whom I grew up, wash and help out in the kitchen, especially while my Godmother was baking bread and doing other household chores. It was he who’d explained to me the dangers of hot-and-cold, thereby justifying the separation of chores. My friend didn’t have that enlightening experience; he’d benefitted from a pampered, protected childhood due to the absence of his father. His view was naïve and out of ‘sync’ with the symmetry of the necessary cooperation between couples raising a family.

RAISING ‘ALL-ROUND SONS’
One of the things I’ve heard women, including my wife, always say is that women can’t raise ‘all-round sons’. Of course, opinions will differ, because children, whether male or female, will adopt misguided notions, regardless of parental guidance, even deceiving parents in the process.

Some years ago, a book came out along a similar vein, ‘Over-schooled and Undereducated’ by John Abbot. Abbot was writing in the context of England, relating his experience as a young teacher who took his students to study Agriculture in rural pre-revolutionary Iran. After a week, the village Headman told him, “These young men are so tall, strong and beautiful, but what use are they! They cannot reap, they cannot ride a donkey, they cannot make a fire, they cannot even sew or sweep or cook like our girls!” To evaluate what the Headman said about our reality, first, I have to admit that when I read this book in 2020, I exhibited some level of conceit. I used my school experiences; bush-cook days, growing up doing chores, life as a bachelor, and the experiences of my childhood friends to conclude that we in Guyana were outside of that predicament.

I have since learnt that the cultural values have changed, especially after a Headmistress invited a group that I had created in 2015; a group called RESCU, to visit and lecture at the school, especially to the boys. This was the second Headmistress that had requested our visit. with young males the priority. In both cases, the lectures were interactive; it was a wake-up call to both myself and McRae. We had no idea what was transpiring in the very world we had left behind so many decades ago.

Change is expected, but intense retrogression is troubling. It is not enough to just conclude that “young people ain’t listening”. Many of us understand the dogmas about respecting one’s elders, and what’s off-limits for elders, but the modern cult of conspicuous consumption has invaded, and is consuming at all costs, and there are not enough souls who are not too frustrated to care and recognise that we have a part to play.