The motionless body of a pensioner was on Monday morning pulled from a trench along Mandela Avenue, Georgetown. Dead is 68-year-old Clive Lawrence Primus of D’Urban Street, Lodge, Georgetown.
Police stated that at about 7:30h on Monday, the Operations Room at Brickdam Police Station received a call relating that a body was seen in a trench along Mandela Avenue in the vicinity of Cevon’s building.
The trench runs north to south and has weeds about three feet in height. However, the body was lying face down and was clad in a pair of black and red pants and a brown and green striped jersey. A grey-coloured pedal cycle was also observed in close proximity to the body. 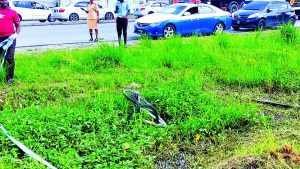 The body and the bicycle in the trench along Mandela Avenue

The deceased’s wife reportedly told detectives that they separated and he was living with his brother at the abovementioned address, but she still communicated with him.
She recalled the last time she saw him alive was on Friday. In the same breath, she indicated that the now deceased man would frequently suffer from seizures and high blood pressure.
Information received by the Police indicated that Primus left home on Sunday at about 17:00h on his bicycle and was never seen or heard from, until his body was found on Monday morning.
“The body was processed by a rank attached to the Crime Scene Unit, CID Headquarters, Eve Leary, and no marks of violence were seen on the body,” the Police stated in a release.
The body was taken to the Memorial Gardens Mortuary awaiting a post-mortem as investigations continue.