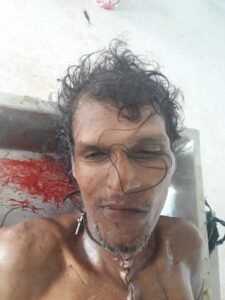 Kaieteur News – The Guyana Police Force (GPF) is currently seeking the public’s assistance in identifying a gold miner who was murdered Saturday last by one of his coworkers at Perseverance Backdam, North West District, Region One.
According to information released by the police, the deceased is of East Indian decent and was identified to them as “Anil” or “Coolie Boy”.
Based on information received, the man was slain by a Venezuelan juvenile who is in custody assisting with the investigation. It was reported that the two were well known to each other and were together working on a mining operation owned by a Brazilian national.
Kaieteur News had reported that sometime around 11:00hrs, the dredging operation had just “washed down” its gold production for the day, after which both men were paid by the owner. Police sources close to the investigation said that the suspect got annoyed after learning that the deceased was paid a higher day’s pay. Sometime after that, it was alleged that the Venezuelan confronted the gold miner and inflicted the fatal injuries on him. The deceased was later in the afternoon discovered lying in a hammock clad in only his pants with multiple stab wounds across his body. He was rushed to the Port Kaituma District Hospital where he was pronounced dead on arrival. The body is presently stored at the hospital’s mortuary where it is awaiting identification.

The Premier League will be 1st in the UEFA coefficient table for the first time in 9 years and will break the La Liga record for points in a season
Hakimi is open to a move to Bayern. For him, you will have to offer at least 45 million euros
Marez was named the best player of the week in the Champions League. He scored twice for PSG in the semi-final
Arsenal are now middling with the expectations and fan base of a top club. Arteta is part of the problem, but he will stay (due to Kroenke's passivity)
Chelsea players will receive about 11 million pounds in bonuses if they win the Champions League and the Cup. In Man City, the amount is higher - 15 million for winning the Champions League
Romelu Lukaku: Zlatan wins for himself, I win for Inter, Ronaldo wins for Juve. Serie A needs players of this level
Atletico President: Messi is the best player in the world. He is very important for La Liga, for all 20 teams. We are Interested in his future

Demerara Bank’s taxed profit increases by 51% to $1.3B

Audit uncovers another $1.1B in expired drugs bought under APNU/AFC regime

Granger files $2B libel suit against Nascimento and 3 newspapers

Over $600M in ganja, guns and ammo found during Ebini raid

Independence Race/Walk on the cards this month

Different strokes are for different folks

BCB disappointed that no male Guyanese earned a CWI contract

Duo granted $350,000 bail each for trafficking in narcotics

1 arrested after vehicle intercepted at checkpoint with ganja

Another 21 arrested in Bartica for breaching COVID-19 guidelines

Hearing on Jagdeo’s $20M libel judgement set for May 17

Guyana set to be cash engine for Stabroek Block partners

Arrivals at CJIA top 60,000 since reopening

Former Pres. Granger sues Nascimento, media houses for over $2.6B for libel

Stepping into another world!

Mr. Roshan Khan must learn about context. It is everything in life

US to assist with electoral and constitutional reform process

Median household income decreased from $100,000 to $67,000 during pandemic – report highlights

Pregnant woman claims she stabbed husband because he was assaulting her

GRFU reach agreement with CCDO to use Camptown ground

Freedom of the Press

No guarantee that economic growth will deliver development

The Face of Humanity?

Farmer and Housewife on $350,000 bail each for possession of marijuana

Linden Nurse jailed for 3 years for luring a child

74-year-old remanded for possession of marijuana

Hydromet Office warns of heavy rainfall for next few days

$680M in ganja destroyed at Ebini

Kamwatta and Whitewater to get electricity by year-end – PM

Letter: Keeping quiet about a crime is a crime