Purported hiccups in hydro project might be a blessing in disguise –Dr. Jailall

Purported hiccups in hydro project might be a blessing in disguise –Dr. Jailall

…says with better oil deal, gov’t would have been able to finance project themselves
Kaieteur News- The alleged setback Chinese Contractor – China Railway First Group (CRFG) is having in securing finance for the controversial Amaila Falls Hydroelectric Project (AFHP) project might be a blessing in disguise for Guyana. This is according to Dr. Jerry Jailall.
Dr. Jailall comment came following the announcement by Vice President, Bharrat Jagdeo on Monday at a press conference. Jagdeo disclosed that CRFG was unable to secure financing for the project which was earmarked to cost US$700 million, a decrease from its 2012 price tag which was in excess of US$1billion. 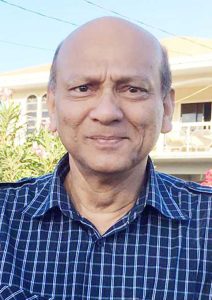 In light of the new setback surrounding the multi-million project, Dr. Jailall stated that since the government seems to be delighted to do high-cost projects – if it use all available leverage points to review and renegotiate the oil contracts, they would have been able to obtain enough money to finance all their energy projects instead of begging companies to do the Build, Own, Operate and Transfer (BOOT) arrangement.
The Amaila Falls project was first promulgated as a solution to Guyana’s energy demands but had to be shelved on many occasions – despite this after assuming office the PPP administration resuscitated the 165 Mega Watt (MW) project.
Back in January, during the presentation of Budget 2022, Senior Minister in the Office of the President, with responsibility for Finance, Dr. Ashni Singh had told the National Assembly that the Chinese contractor, who was granted approval to construct the Amaila Falls Project, will commence operations on the mega venture this year and be completed by 2027. Dr. Singh is reported in the media as saying that the project will be developed under a BOOT arrangement within which the Guyana Power and Light Incorporated (GPL) will purchase power from the operator under a Power Purchase Agreement (PPA).
However, according to the recent announcement by the Vice President, the contractor had as late as April 22, written to the government “saying that they are having a hard time doing the BOOT (Build, Own, Operate Transfer) contract and they want to shift to an EPC (Engineer, Procure, Construct) plus finance” option instead.
Jagdeo explained that under an EPC contract, it would mean that the government would have to secure the finances for the project and that they would be used as the EPC contractor. As such, he disclosed that in light of the developments, government may very well have to retender the project. “We have been in discussion with the company since November last year, the discussions, the negotiations are very difficult,” according to Jagdeo who indicated that “in the negotiations, we are still trying to get them to meet the commitment that they bid,” Jagdeo added.
The Chinese bid, he said, had committed to 7.7 Kwh but are now saying “they can’t go ahead with the BOOT they want to change the basis to an EPC.”
He was adamant; however, that if the project cannot be done under the BOOT arrangement the project would have to be retendered due to the fact that’s what the tender was about, a BOOT model not an EPC+ finance model. As such, in a letter sent to this publication, Dr. Jailall questioned the reason for the company backing down.
“My Church folks would say that is God sending us a message, or the devil is trying to defeat us. But in Guyana one man alone decides what is good for the whole country in all things. He is some people’s little “god,”’ Dr. Jailall stated.
Dr. Jailall highlighted that the project had a false start and was scandal ridden – he questioned how did the procurement process produced a result where a man who never built anything got the contract for building an access road for Amaila back in the initial stage.
With the new snafu, Dr. Jailall stated that Guyana now have the opportunity to rethink the energy mix. To support his recommendation, he stated that Mr. Bhulai, a Guyanese nationalist, has made a good case for solar energy as the country’s best, cheaper alternative.
To further prove his point, he highlighted that the Government never responded to the question of how Barbados would be able to produce 178 MW of power that will cost US$100 million, and Guyana is spending almost a billion for the same amount of power. He referenced the article that was carried in this publication on February 23, 2022, under the title, “US$100M to produce 178MW from solar, hydrogen in Barbados.”
In contrast to what Barbados is doing, he stated that the Irfaan Ali Government is pursuing a hydro electrical project at Amaila Falls for a revised cost of US$700M. In closing, he stated, “Pray for smarter leaders to emerge in Guyana,” then adding, “It’s our wealth and our country, and we need leaders who care and will fight for the national interest, not the rights of oil imperialists.”