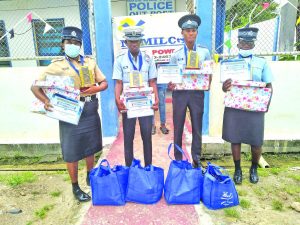 Awardees of the Tribute to Law Enforcement Officers

The teams, led by Kevlon Anderson and Jonathan Rampersaud respectively, have a mandate from club management to host a total of 40 personal self-development programmes under a wide range of sub-headings including sports, public health, awards, education, community development and youth development.
Club Secretary/Chief Executive Officer (CEO) Hilbert Foster, in remarks, congratulated the awardees on a job well done and stated that the RHTY&SC and its cricketers were honoured to recognise their service to Berbicians in general. He noted that the law enforcement officers were all positive role models to youths in the Rose Hall Town area and called on them to uphold the image of the Guyana Police Force. He expressed thanks to them for allowing residents of the township to sleep in relative peace at nights and also for the current low crime rate in Guyana’s smallest town. The awardees – Constable Roger Saunders, Constable 24973 Coleen Ayling, Special Woman Constable Marcilla Profitt and Constable 25105 Kevin Tyndall – were selected by the management of the Rose Hall Town Police Outpost and the club. 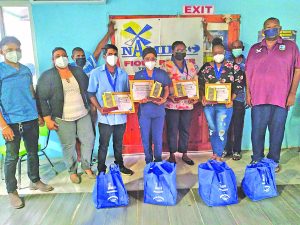 At Port Mourant, the teams honoured four medical workers who were specially selected by the hospital management based on their hard work and dedication. Those honoured were Abdool Kadir (Porter); Teola Gonsalves-James (Lab Technician); Verona Campbell (Pharmacy Dept) and Venelli Brewster (Nursing Assistant). Foster stated that the award was launched five years ago when he was a patient at the Port Mourant Hospital and was very impressed with the highly-professional attitude of the management and staff. He stated that over the years, the RHTY&SC has developed a very close working relationship with the hospital and has made several donations to the institution. The Regional Health Officer, Dr Vishalya Sharma expressed thanks to the cricket teams and Foster for recognising the performance of the workers and called for more organisations to follow in their footsteps. She praised the positive efforts of the Port Mourant staff and the effect they were having on the lives of residents in the area. Each of the awardees received a plaque, medal of excellence, framed certificate of excellence, and four special gifts that included a NAMILCO Thunderbolt Flour hamper.
The teams will soon join hands with their clubmates in the Farfan and Mendes Under-15 team, Bakewell Under-17 and second-division teams, Pepsi Under-19 and intermediate teams, and Metro female team to honour teachers, retired educators, firemen and post office workers under the massive Tribute to Heroes programme. Among the players in the NAMILCO Thunderbolt Flour teams are Kevin Sinclair, Clinton Pestano, Kevlon Anderson, Junior Sinclair, Shawn Perriera, Slyus Tyndall, Keon Sinclair, Jonathan Rampersaud, Jeremy Sandia, Mahendra Gopilall, Christopher Deroop and Assad Fudadin.