Verification process for fisherfolk cash grant to commence before weekend

THE verification process for fisherfolk to access the one-off $150,000 grant announced by President, Dr Irfaan Ali on Tuesday, is expected to commence before the end of this week said Agriculture Minister Zulfikar Mustapha on Wednesday.

The minister gave the update to fisherfolk at separate meetings held at Annandale, Mon Repos and Montrose, East Coast Demerara, while explaining to them that the government is cognisant of the negative impact of the rising cost of living and has been implementing measures to bring relief to Guyanese.

Minister Mustapha noted that the funds will be made available after a verification process. Fisherfolk will be required to submit their names, their fishing licences and some form of identification to the relevant fisheries officers.

The minister during his remarks also cautioned them to desist from engaging in fraudulent activities as was reported in many communities during the distribution of the flood-relief cash grants for farmers. 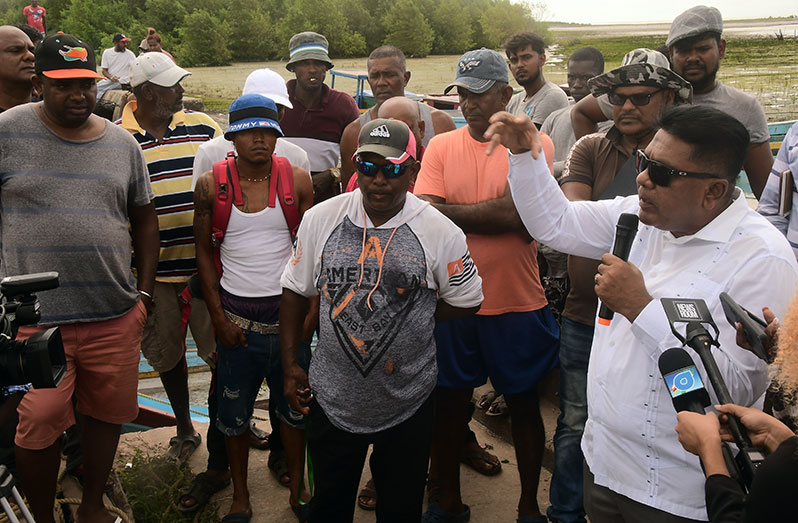 While recent reports have shown that catches have been improving, many fisherfolk say that it has been a challenge to get by with their small earnings to afford basic household items for their families. The gash grant, the minister noted, will be helpful in this regard.

On Tuesday, President, Dr Irfaan Ali, during a public meeting at Windsor Forest on the West Coast of Demerara, announced that fisherfolk will be the beneficiaries of a one-off grant of $150,000.

The grant is expected to benefit between 5,000 – 5,500 persons
President Ali noted that after the government did a complete assessment of its revenue streams and finances, it determined that the $150,000 grant will be issued to the fisherfolk.

“We are announcing an initiative for every single person identified; we are going to help you with a one-off grant of $150,000. This is an immediate step that we are taking to assist you, in addition to all that we’re doing to expand the industry,” President Ali said.

The President noted that the grant for the fisherfolk ties in with the government’s commitment to increase support for the agriculture community, as Guyana and the rest of the Caribbean strive to increase the production of food commodities, in keeping with the ‘Vision 25 by 25’ target.

“Our goal is to create the system in which we can increase productivity; we’re working to make Guyana an important part of the food supply to help the whole Caribbean. To do this, we have to invest in every sector and every segment, in developing our productive capacity; that is why we are addressing, today, our fishing industry specifically,” the President said.