It’s like a warzone – Haitians surrounded by turf wars 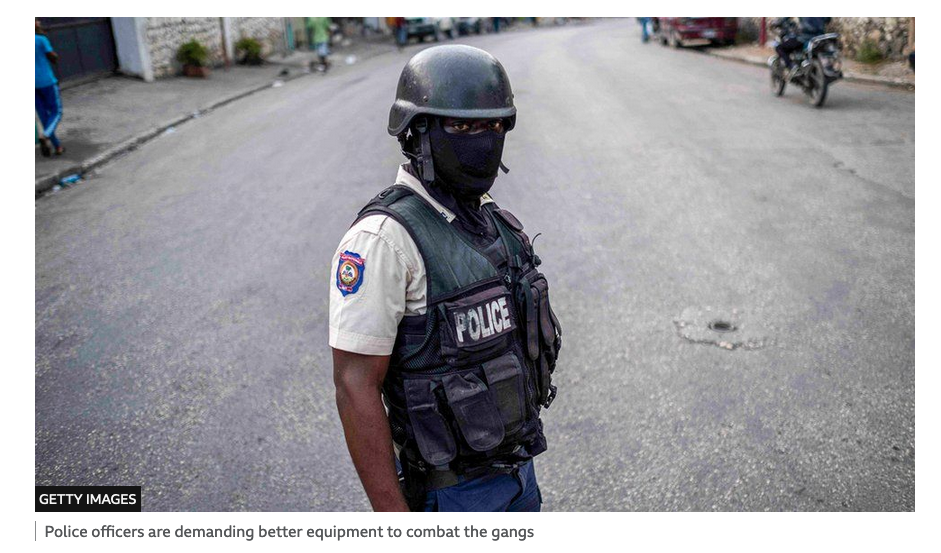 Packed with close to 400 parishioners, Sunday mass on 24 July was like any other at the Assembly of God on the outskirts of Haiti’s capital, Port-au-Prince, Pastor Samuel Lucien says.

Warning: This article contains descriptions from the beginning which some readers may find upsetting.

All until, just after midday, a group of balaclava-wearing armed men entered the church and killed Police Inspector Réginald Laleau.

The 45-year-old led a unit which regularly patrols territory controlled by one of the capital’s most feared gangs, called 400 Mawozo.

“I tried to seek cover but there were so many bullets, such heavy fire. I’ve never heard anything like it before in my life. It was like a warzone,” recalls Pastor Lucien.

After murdering Inspector Laleau, the gunmen left the church, taking his body with them.

Later that evening, 400 Mawozo shared a video showing the gang’s leader next to Laleau’s tortured body, threatening to kill everyone in his policing unit.

Even before 400 Mawozo had posted its gruesome warning, police officers knew they had become targets.

“It hurts us to see how they are treating police officers, how they are killing policemen,” says Lionel Lazarre, head of the police union.

​​Outmanned and outgunned by the well-armed gangs, officers, who earn less than $100 (£82) a month on average, are demanding the government do more to back them up.

“We need more support and more equipment urgently,” insists Mr Lazarre. “We urgently need the government to make this their priority.”

While Mr Lazarre says he still believes that the Haitian police can solve the current security crisis, murders like that of Inspector Laleau are a brutal sign of the control that gangs now exert in Haiti’s capital.

An estimated 60% of Port-au-Prince is now classed as “lawless” by human rights groups.

The city, similar in size to sprawling Los Angeles, has been paralyzed by a battle for power and territory between dozens of gangs.

Once buzzing with nightlife, the city centre now looks and feels like a ghost town. The shops are shut and many residents have abandoned their homes out of fear of being caught in the crossfire. 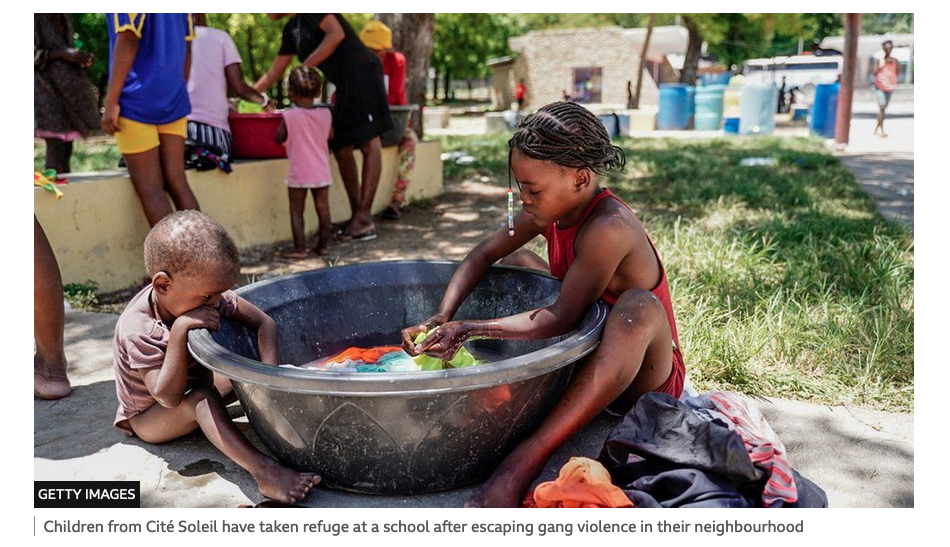 On the outskirts, huge swathes of the community are living hand to mouth, without electricity or access to clean water.

The BBC has mapped five major incidents which illustrate the levels of violence residents faced all in the space of one month this year. 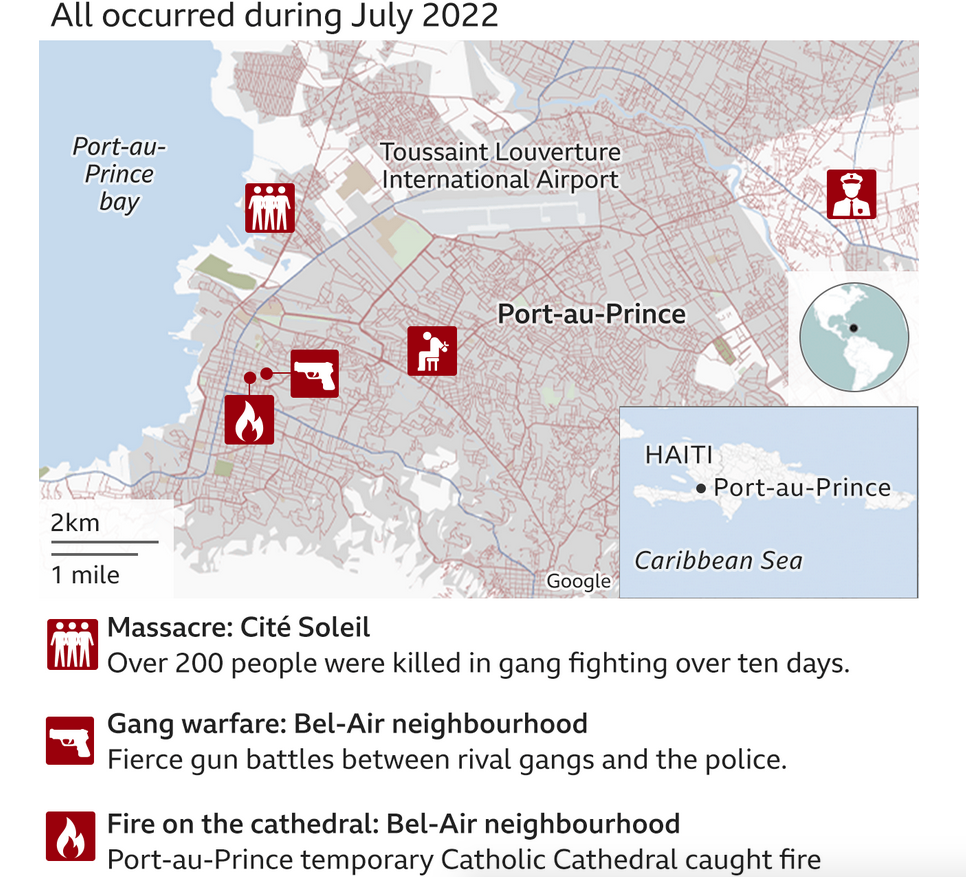 8 July: A 10-day long turf war erupted between the G9 and G-Pèp gangs in the residential neighbourhood of Cité Soleil. According to UN figures, 209 people died, of which 114 were gang members. More than 3,000 residents were forced to flee their homes.

24 July: The killing of Police Inspector Réginald Laleau during Sunday Mass. His death has taken the number of officers killed in the first six months of 2022 to more than 30.

26 July: A brutal kidnapping by armed men in balaclavas is captured on CCTV. Locals can be seen running from the scene which took place right outside a school in which more than 300 displaced children and adults were sheltering from the ongoing turf war in Cité Soleil.

27 July: During the turf war, the city’s temporary cathedral is set ablaze. The original cathedral was destroyed in 2010 during an earthquake.

A city wracked by violence

The BBC has also mapped which gangs control which parts of the city, as of July 2022.

Relentless turf wars between the groups mean many of the boundaries are in constant flux. 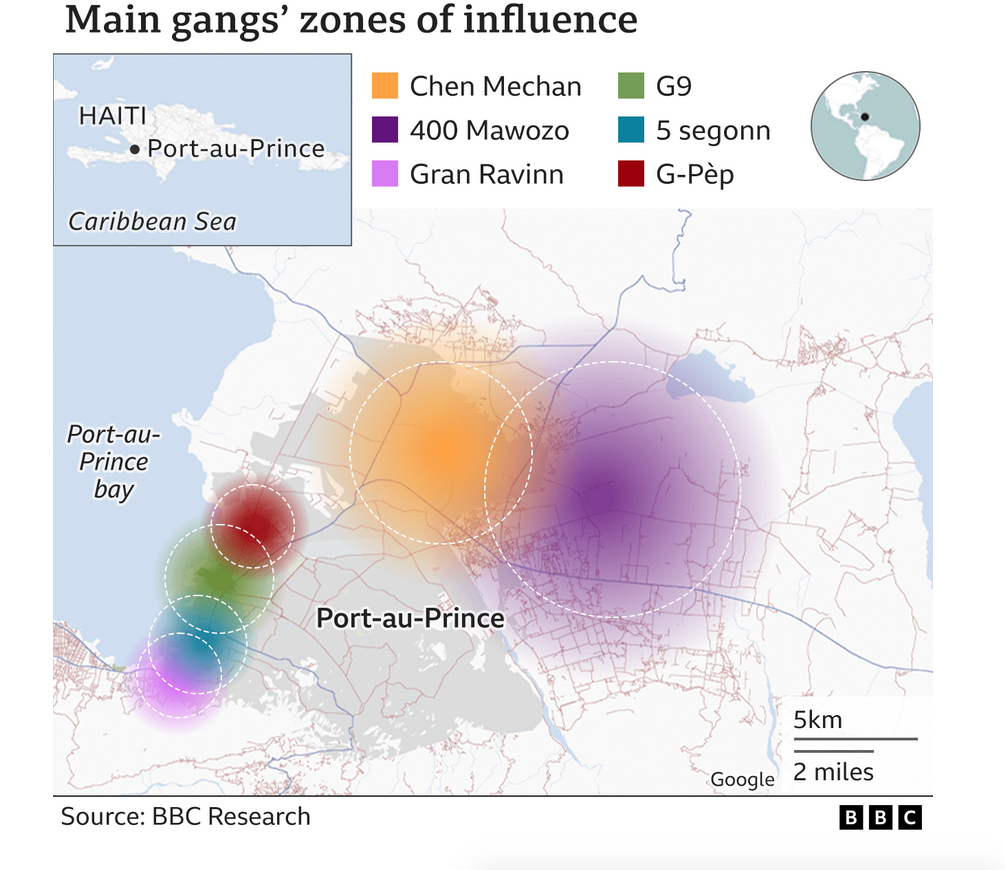 The G9, an alliance made up of nine gangs, controls the city’s major coastal ports and oil terminals, giving it a stranglehold over much of the city’s economy. It may not be the gang to command the most territory, but it arguably is the one with the biggest economic power.

US officials allege that Barbecue and the G9 were behind a brutal massacre in 2018, in which at least 71 people were killed in the La Saline neighbourhood of the capital.

The gang which commands the biggest swathe of territory is 400 Mawozo.

The influence of 400 Mawozo is not limited to the capital either. It controls the road to the Haiti’s border with the Dominican Republic as well as access to the north of the country.

Access to Haiti’s south is in the hands of 5 Segonn (5 Seconds), a gang which has boasted on social media of seizing entire buses full of people travelling out of Port-au-Prince.

Since the murder of Inspector Laleau, no church service has been held in the Assembly of God.

Pastor Lucien says the community is still in shock: “People are still too scared to attend church.”

“Everybody knows the risks, that something could happen,” he says. “But we never imagined it would happen in a church, let alone our church.”

“I believe Haiti must and can change.”

iciHaiti - Competition : Names of the winners of the «Young Journalist Prize in Haiti»

iciHaiti - Gonaïves : The Ministry of Economy, vandalized and set on fire

iciHaiti - Petit-Goâve : The Government Commissioner come to the aid of the detainees

iciHaiti - Crisis : Hospitals and a Physiotherapy Center threatened with closure for lack of fuel

Tropical Storm Ian Strengthens as it Heads to Cuba, Florida

iciHaiti - Looting : The Minister of the Interior calls for calm

iciHaiti - Petit-Goâve : 2 detainees die of starvation, 5 others in serious condition

ici Haiti - Insecurity : The UN recommends the evacuation of its non-critical personnel in Haiti

iciHaiti - Drinking Water : Signing of an agreement between UNICEF and DINEPA

iciHaiti - UN : Despite the insecurity, the IOM continues to provide assistance to migrants

Jaishankar catches up with German counterpart on sidelines of UNGA

iciHaiti - Politic : The PM condemns the Desecration of the Statue of Dessalines