Weapons smuggling to Haiti is on ‘alarming trend.’ Feds crack down, ask for public’s help 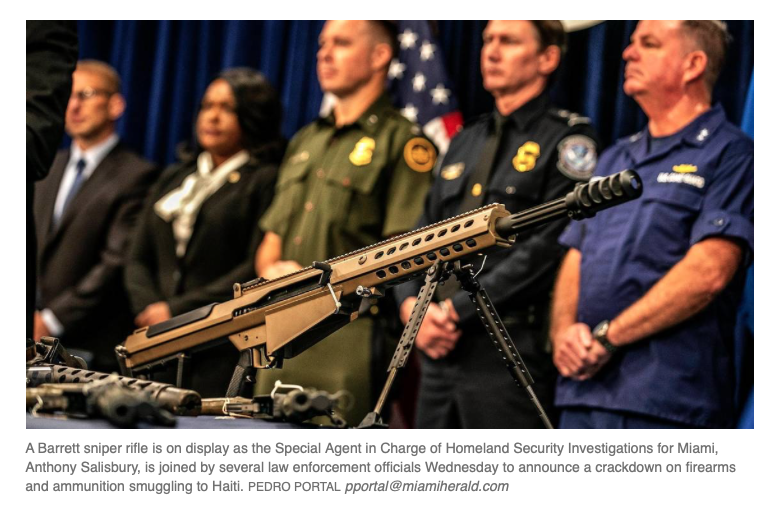 A row of federal agents and prosecutors stood Wednesday behind tables displaying dozens of recently seized military-grade sniper rifles, belt-fed machine guns and semi-automatic pistols — all originally destined for Haiti. Their message: Firearms smuggling from South Florida to Haiti has spun into “an alarming trend” and the feds need the public’s help to plug the pipeline of illegal weapons exports to the violence-stricken Caribbean nation. Anthony Salisbury, special agent in charge of Homeland Security Investigations, said at a news conference that both the number of weapons and the types of firepower have increased to unprecedented levels to a region torn apart by drug traffickers, gang violence and everyday kidnappings. Since the early 1990s, the United States has imposed an embargo on weapons sales to Haiti, but all firearms exports to foreign countries require a federal license.

Without disclosing the number of seizures and investigations, Salisbury said the firearms on display were “just a sample” confiscated at South Florida ports and elsewhere that had been bound for Haiti. 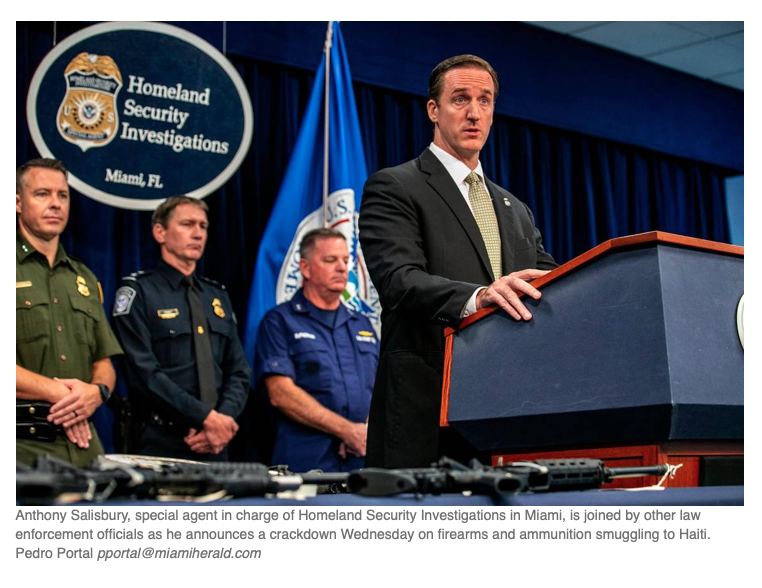 “This is certainly a caliber that we found very troubling,” Salisbury said at Homeland Security’s regional office in Doral. “The number and high caliber nature of these weapons — you got a belt-fed machine gun, you got a Barrett .50 caliber sniper rifle,” he said. “This kind of caliber is some heavy caliber stuff.” It’s the kind of firepower that can not only massacre a lot of people but also shoot down a helicopter or airplane.

“In the wrong hands, these weapons are capable of causing untold destruction,” Salisbury said. “In the wrong hands these weapons are easily capable of causing mass casualties.” Joining Salisbury were top officials with U.S. Customs and Border Protection, the Coast Guard, Commerce Department, Alcohol, Tobacco, Firearms and Explosives, along with prosecutors from the U.S. Attorney’s Office in Miami and officers with the Miami-Dade Police. They encouraged the private sector, including shipping businesses, to provide tips about suspicious weapons exports to the Caribbean — a region that accounts for about half of all federal firearms smuggling investigations, authorities said. “We cannot do this alone; we need the help of the public,” Salisbury said. 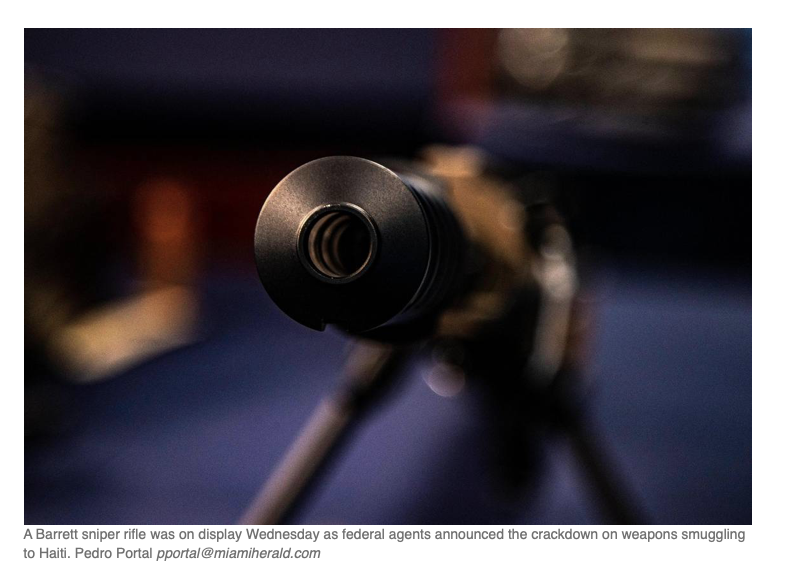 While reaching out for the public’s assistance, federal authorities also said they have devoted extra resources to fighting weapons smuggling — a problem exacerbated by Haiti’s demand for firearms as well as Florida’s lax marketplace for gun sales, as detailed in a Miami Herald story on the crisis published Tuesday. The escalating problem, with links to heightened violence in Haiti, has stirred up policy debates among lawmakers and officials in Washington and the Caribbean.

On Wednesday, Haitian Foreign Minister Jean Victor Géneus spoke about the country’s raging gang violence at a special meeting of the Organization of American States in Washington. He had requested the meeting after the organization’s chief, Luis Almagro, issued a statement last week blaming the international community for the country’s descent into chaos. Acknowledging that Haiti faces “great security challenges,” Géneus called on countries to stop sending “illegal arms to Haiti” and to assist Haiti’s government in purchasing guns, ammunition and armored vehicles for its national police force. “Some gangs are better armed than our national police and we need to address these imbalances,” he told representatives of member states, which hail from the Western Hemisphere. “Efforts are also being made to cut off these criminals from their main sources of supply, namely the illegal trafficking of firearms,” Géneus said, noting that Haiti does not manufacture weapons. “The problem of insecurity cannot be solved without tackling the illegal international arms trade, In this context, the Haitian government invites the member states to support its efforts to curb this scourge.” 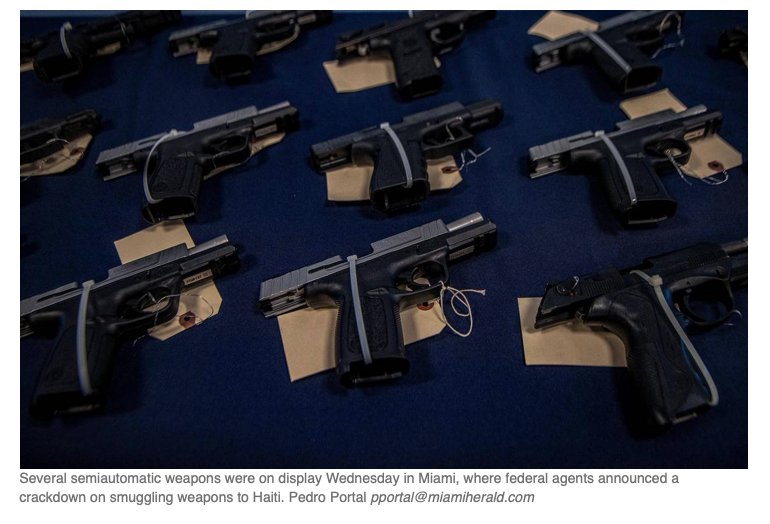 He noted that Haiti’s customs officers and police have recently made significant seizures, the most “spectacular of which” involved a cargo ship, Miss Lilie, that arrived from the Port in Miami with 120,000 rounds of ammunition in early July in the northwest city of Port-de-Paix. Some 13 days later, another seizure was made, this one in Port-au-Prince while gangs were terrorizing residents in the capital’s largest slum, Cite Soleil. The police are “leading a heroic fight against large-scale banditry with encouraging victories” that have been welcomed by the public, Géneus said.

Anyone with information about suspicious weapons smuggling activity may call Homeland Security Investigations hotline: 1-866-347-2433. We may earn a commission if you make a purchase through one of our links. This story was originally published August 17, 2022 3:40 PM. JACQUELINE CHARLES

iciHaiti - Cholera : Entry ban on cooked food from Haiti on the Dajabón market

iciHaiti - Guatemala : A bus leaves the road with several Haitian migrants on board

Haiti at Breaking Point as Economy Tanks and Violence Soars

Food Sovereignty in Haiti – Part One

iciHaiti - Contraband : More than 8,000 gallons of fuel seized at the Dominican border

Haiti at the Crossroads: Civil Society Responses for a Haitian-led Solution

iciHaiti - AVIS France : Message from the Ambassador to French people living in Haiti

iciHaiti - France : Closing of the RAID training course for specialized agents of the PNH