Dog owners have been reminded that by law they must microchip their pets, after 10 suspected stolen dogs were recovered during a planned Garda search operation in Co Limerick.

The dogs were discovered when gardaí executed a search warrant at a property in Rathkeale on August 1st.

“During the course of the search gardaí­ found a large number of dogs on the property. Upon checking the dogs they had no dog licenses or proper identification papers,” a Garda spokesman said.

The breed of dog recovered included “Labrador, springer spaniels, English setters, Cavalier King Charles and huskies” which were “being cared for in a local shelter”.

Gardaí said that “through initial enquiries” they had “reunited one of the dogs, a cavalier King Charles, with its owner” after the dog was “stolen in the Drumcollogher area of Co Limerick on June 9th, 2020”.

During the search operation in Rathkeale, gardaí seized “a small quantity of suspected cannabis herb”.

“No arrests have been made but gardaí are following a definite line of enquiry and expect to progress the investigation in the near future,” the force said.

Photos of the nine other dogs recovered have been posted on An Garda Síochána social media channels in a bid to “help reunite” them with their owners.

“Owners are asked to contact Newcastle West Garda Station via email to Newcastle_West_DS@_at_garda.ie”. 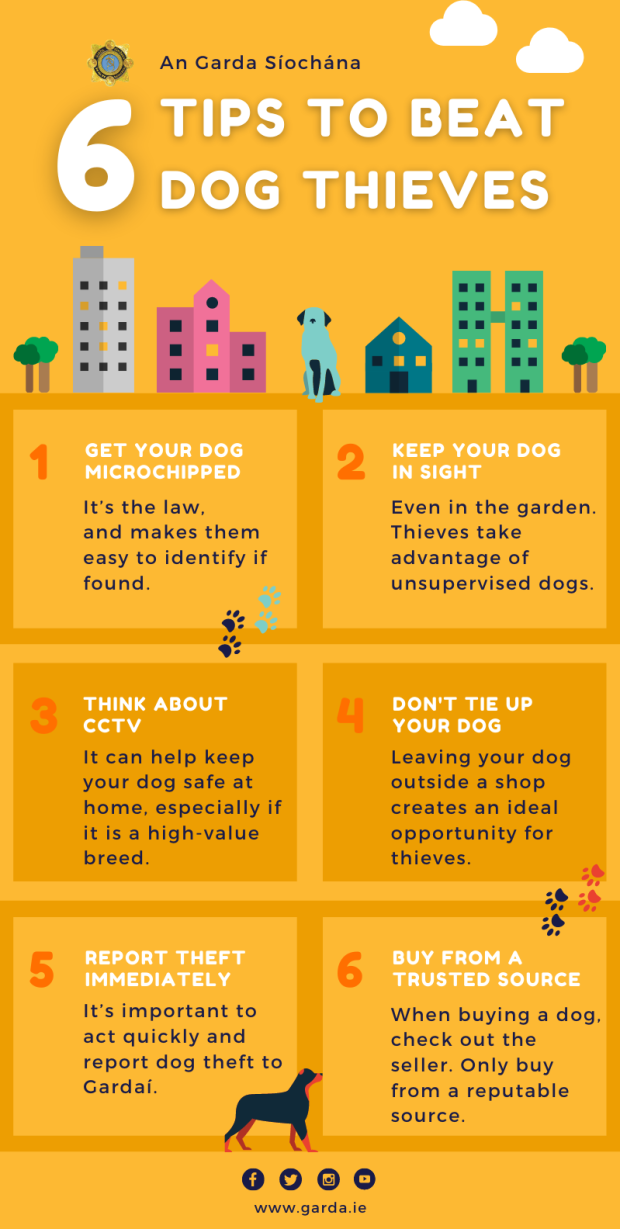 There have been a string of dog thefts around the country recently and speaking on Monday, crime prevention officer Sgt Ber Leetch advised dog owners to “to take precautions for their dog’s safety”.

Dog owners must have their pets microchipped by law and for the purposes of making it easier to identify the animal if they are found, she said.

“For your dog’s security, I would recommend they are microchipped so that they can be easily identified if found and returned to the owner. Remember if you have just purchased a dog to get the details on the chip updated to reflect your details, and also place contact details on their collar in the event that they escape. Ensure that your home and garden are secure to prevent theft and deter potential culprits,” Sgt Leetch said.

“If you have a high value breed of animal you may wish to consider CCTV and other crime prevention measures. If you are buying a dog, or returning a dog to its suspected owners, make sure the person is bona fide,” Sgt Leetch said. She also thanked the Limerick councils for their assistance in the operation.

Atletico are in talks with Arsenal to buy out Torreira
Kulusevski scored with the sixth touch and the first shot for Juve-this is crucial in the debut victory of coach Pirlo
Real Madrid was the first in La Liga to release 4 players born in the 2000s
Messi says goodbye to Vidal: I always thought you were a phenomenon. Our paths will cross again
Zidane about 0:0 with Sociedad: Real Madrid lost two points. Overall, we played well
Real Madrid have lost points in 1 La Liga game in 5 of the last 8 seasons as Champions
Andrea Pirlo: I don't want to just copy someone's ideas, I have my own
Source https://www.irishtimes.com/news/crime-and-law/10-suspected-stolen-dogs-recovered-by-garda%C3%AD-in-co-limerick-1.4322596

Paul Mescal misses out on his Emmy as Watchmen, Schitt's Creek and Succession clean up

Opinion: People seeking absolutes in times of uncertainty are falling for conspiracies online

The new Green List kicks in today, here are the countries included