TENS OF THOUSANDS of people calling for the authoritarian president of Belarus to resign have marched through the capital as the country’s wave of protests entered its seventh week.

Hundreds of soldiers blocked off the centre of Minsk, deploying water cannons and armoured personnel carriers and erecting barbed wire barriers. Protests also took place in several other cities, including Brest and Grodno.

The crowd in Minsk included about 100,000 people, said Ales Bialiatski, head of the Viasna human rights organisation. He said dozens of demonstrators were arrested in Minsk and Grodno.

Protests began on 9 August after an election that official results say gave President Alexander Lukashenko a sixth term in office. Opponents and some poll workers say the results were manipulated.

Lukashenko, who has repressed opposition and independent news media during 26 years in power, has rejected suggestions of dialogue with the protesters. Many members of the Coordination Council that was formed by the opposition to push for a transition of power have been arrested or have fled the country.

The Minsk demonstrators carried the red-and-white flags that were independent Belarus’ national standard before being replaced in 1995, early in Lukashenko’s tenure.

‘People are the power’

Although protests have taken place daily since the election, the Sunday gatherings in Minsk have been by far the largest, attracting crowds of as many as 200,000 people.

“Every Sunday, you are showing yourselves and the world that the Belarusian people are the power,” said Sviatlana Tsikhanouskaya, who was Lukashenko’s main election opponent. She released the statement in a video message from Lithuania, where she is in exile.

The marchers also carried portraits of Maria Kolsenikova, a top opposition figure who has been jailed for two weeks and is facing charges of undermining state security that could bring a five-year prison term.

Kolesnikova has said security forces drove her to the border with Ukraine to try to make her leave the country, but that she tore up her passport so she could not cross the border.

In a statement relayed by her lawyer, Kolsenikova urged protesters to continue.

“Freedom is worth fighting for. Do not be afraid to be free,” she said. “I do not regret anything and would do the same again.”

Meanwhile, interior ministry spokeswoman Olga Chemodanova said an investigation has been opened into the release by hackers of the personal information of more than 1,000 employees of the ministry, which runs the nation’s police forces.

Officers yesterday arrested more than 200 demonstrators including an elderly woman who has become a symbol of the six weeks of protest that have rocked the country.

More than 2,000 women took part in the march in Minsk. 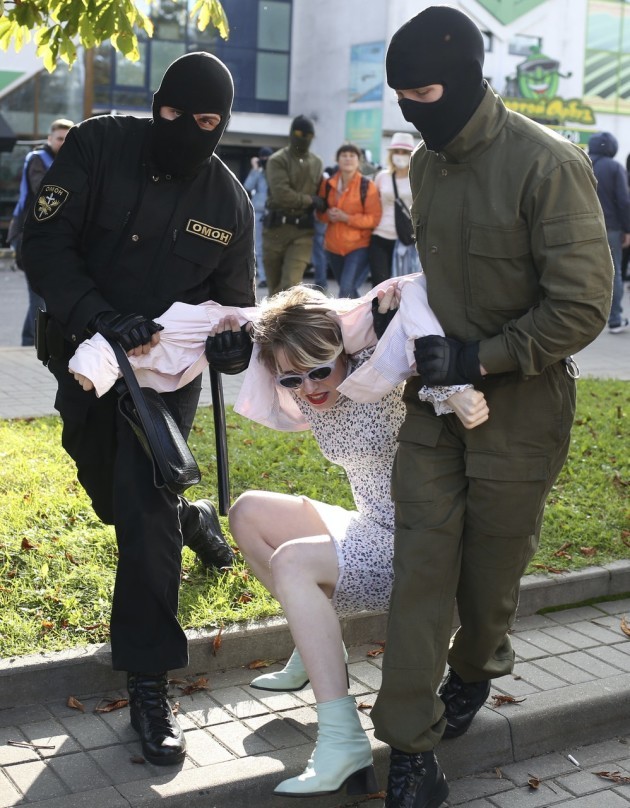 Among those detained was Nina Bahinskaya, a 73-year-old former geologist whose defiance has made her a popular figure in the protests.

Many of the women in yesterday’s march chanted “We’re walking!” referring to when police told Bahinskaya that she was taking part in an unauthorised protest and she snapped back “I’m taking a walk”.

Metz forward Gyan is the best player in Ligue 1 in September. He is the leader of the goalscoring race
Miranchuk is able to play in almost any club in the world. Ex-midfielder Loko Drozdov about Atalanta newcomer
Bale on Tottenham start: I'm not completely ready yet. I'm trying to get in shape
Ex-Barca coach Sethien can take over at Palmeiras
Fonseca about 2:1 with young boys: Gave a break to some. Now Roma will focus on Milan
Highlight of the month: the Rangers forward scored from 50 meters (the farthest goal in the history of the Europa League). Gerrard says he's never seen anything more beautiful 😍
Mourinho on 3:0 with LASK: Difficult opponent, but Tottenham played so that the victory seemed easy
Source https://www.thejournal.ie/belarusian-police-arrest-200-women-at-opposition-protest-5209997-Sep2020/

'I'm the least racist person in this room': The key moments and takeaways from the US presidential debate

We’re all angry, but can we agree to pay student nurses?

As it happened: Trump and Biden dial aggression down a notch in final presidential debate