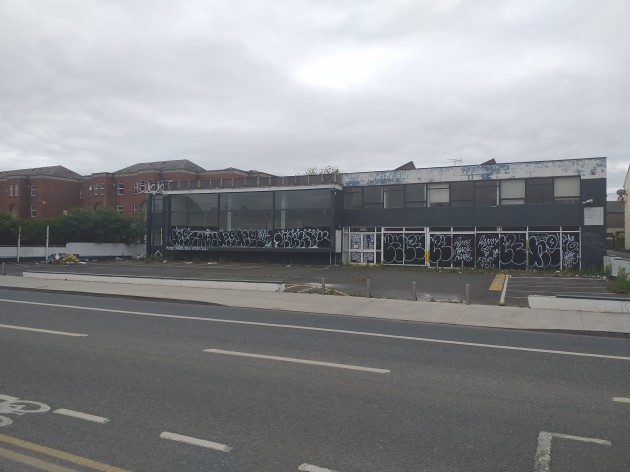 The site as it currently is at the former Kenilworth Motors.

A LOCAL REPRESENTATIVE has labelled a planned co-living development for Dublin’s Harold’s Cross as “totally incompatible” in the age of Covid-19.

Trinity House Investments (THI), a Singapore-based group of investors, is behind the plans to redevelop the site. THI bought the site in 2018 and says it intends to develop it for “student accommodation or residential uses”,

The planned five-storey building would have 147 single-occupancy bedrooms with 27 double rooms, potentially providing accommodation for 201 people.

Residents will share other areas, with shared kitchens, living and dining areas at each floor level. There will also be other communal spaces such as a function room, a café, reception and laundry room.

The potential for 201 people living in the building means the planning application can be made directly to An Bord Pleanála and not Dublin City Council. 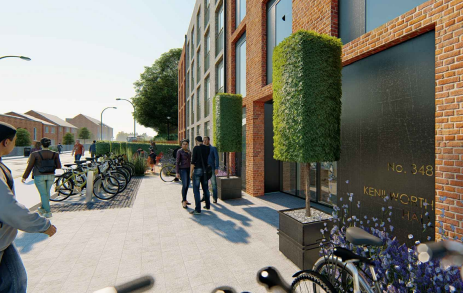 Plans for the forecourt on front of the building. Source: Kenilworth Hall

Under regulations brought in by the previous government, applications for developments of more than 100 houses or mixed-use/student accomodation with more than 200 beds can be made directly to the State’s planning authority.

A previous feasibility study for the site in question by BKD Architects suggested it could accommodate a student accommodation scheme of about 120 bed spaces.

In documents submitted as part of the current application process, the developer says the planned ‘Kenilworth Hall’ would “accommodate people on a short to medium term basis who are working in the local area and Dublin City Centre”.

The application also states that Kenilworth Hall would be operated by CRM, a London-based student accommodation company that operates across the UK.

Co-living developments have proven controversial in recent years with the previous housing minister Eoghan Murphy facing criticism for suggesting they were ‘an exciting choice’ for young workers.

Guidelines by the Department of Housing state that co-living developments are “not envisaged as an alternative or replacement” to conventional developments and are only appropriate when “responding to an identified urban housing need at particular locations”.

The Kenilworth site is located not far from where there are plans for a number of other co-living developments.

Permission for a site on Rathmines Road is currently being appealed to An Bord Pleanála while Bartra Capital is also appealing a previous rejection of co-living plans for nearby Ardee Road.

Speaking to TheJournal.ie, Peter Dooley of the Dublin Renters Union said he was previously opposed to co-living developments but that they are now “utterly incompatible” with life during the Covid-19 pandemic.

“There’s no way you can have any form of physical distance in shared living accommodation. It’s impossible. So anybody who will tell you different is obviously working for an agenda that would favour developers,” Dooley says.

Fantastic public meeting tonight at Kenilworth to oppose the plans for a 201 bedspace Co-Living development. The call came loud and clear tonight that co-living has to be stopped as the community are coming together and organising against it. We need real homes not workers cells. pic.twitter.com/pkwXXtH6qU

Dooley, who ran in the most recent local and Dáil elections, noted the other co-living development in Rathmines and said there is a fear that Dublin 6 could become overrun with that type of accomodation.

“There are so many families that are living in the area, living in Dublin 6 and the wider areas that can’t afford to live there with their family, they commute long distances to get their children minded as they go to work. There are children in schools and stuff but there’s nowhere to live.”

With Fianna Fáil now in control of the housing portfolio and Covid-19 affecting policies across the board, the future of co-living developments has been questioned further.

New Housing Minister Darragh O’Brien has said that a review will be conducted into the provision of co-living developments.

He told the Dáil last week that – to date – not one co-living development has been built, although planning permission has been granted to a number of developments.

“I want to make sure, through the review, that there is no impact on or any unintended consequences for purpose-built student accommodation or other things. I have started that review and I do not intend it go on forever,” the minister said in response to Labour’s Aodhán Ó Ríordáin TD, adding that he would return to the matter “in the autumn”.

My own views on this issue have not changed. I want to make sure, as part of the review I am undertaking, that there are no unintended consequences to proceeding with such schemes. The deputy made the further really important point that we already have people living in shared accommodation in overcrowded apartments and houses, sometimes with three or four generations in the same home.

Ó Ríordáin pushed for a more specific timeline for the review and stated that it was “absolutely irresponsible” to suggest that co-living is appropriate in light of the Covid-19 pandemic.

Sinn Féin’s Eoin Ó Broin said that the minister was not required to carry out a review and that he could can “walk into the Custom House and abolish this bonkers policy right now”.

Gotze on the wrong decision to return to Borussia: Things didn't go as I expected
Fans thought it was absolutely sensational that a football player could get on a train. And partly because he could read. Norwegian from the Premier League destroys myths
Paolo Maldini: Zlatan is an ageless all - rounder who always decides the outcome of the match
Suarez wept at a farewell press conference in Barca
Lukaku on 2:3 with Sevilla in the Europa League final: It was a difficult moment. I haven't spoken for 4 days
Di Maria about Messi's desire to leave Barca: immediately wrote to him on instagram, how PSG will play with him
Paul Parker: Maguire is the captain of Manchester United only because of his $ 80 million price tag
Source https://www.thejournal.ie/harolds-cross-kenilworth-co-living-5168240-Aug2020/