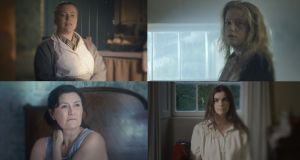 A woman who was raped and became pregnant by anti-Treaty forces during the Civil War wrote to the Archbishop of Dublin Dr Edward Byrne looking for help.

The letter written by the woman, known as Mary M, has been discovered in the archives of the Archdiocese of Dublin by the UCD historian Dr Lindsey Earner-Byrne.

It will feature in a documentary to be broadcast on TG4 on Wednesday entitled Cogadh Ar Mhná (the women’s war) which tells the story of sexual violence carried out against women during the revolutionary period.

The woman was raped in January 1923 by a party of men who entered her home in Moate, Co Westmeath which she shared with her blind aunt and uncle, both of her parents being dead.

In the letter sent in July 1924, she recalled “During the political trouble when looting and robbing and raiding were carried on to such an extent in our country district, my trouble began.

“In January 1923, a party of men, armed to the teeth and calling themselves republicans, forced their entrance into our house.

“The object of their visit was money or lives and they were furious when they did not get money. One brute satisfied his duty passion on me.

“I was then in a dangerous stage of health and through his conduct I became pregnant. Could any pen describe what I have gone through?”

Mary M went on to state that she intended to take her own life but was talked out of it by a Franciscan priest. 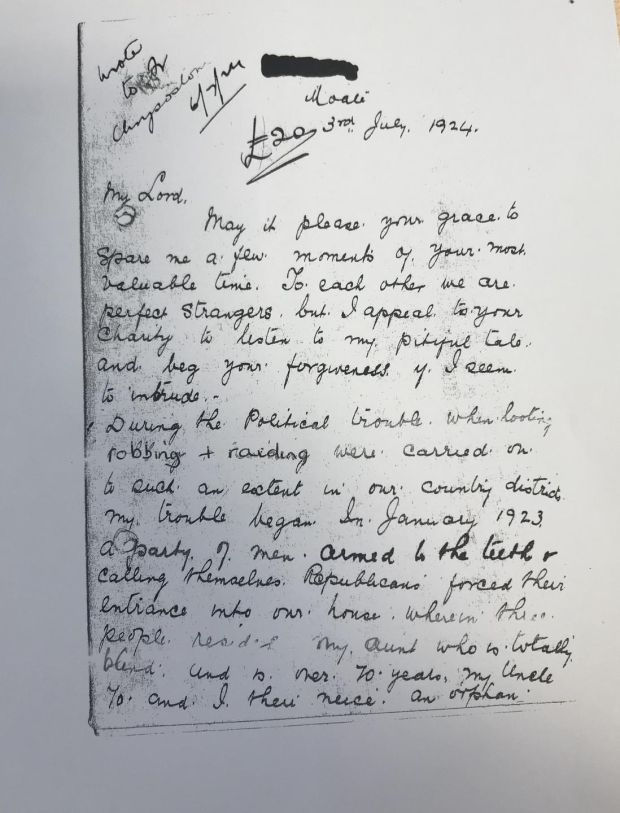 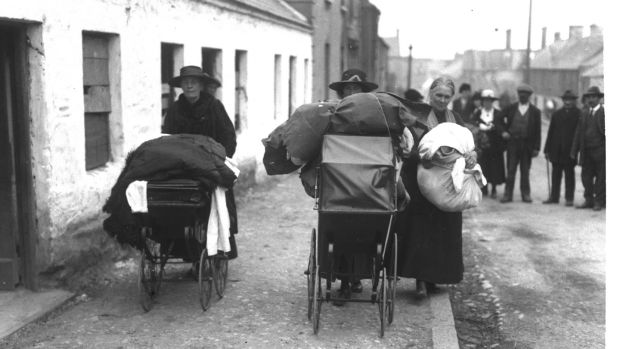 In October 1923 she gave birth to a baby boy in the National Maternity Hospital in Holles Street.

When she was told that she would have to look after the baby by herself, she asked that it be taken to heaven “but my prayers fell on deaf ears”.

The woman told the Archbishop she was stealing from her elderly aunt to pay a Mrs Cruise from a rescue agency 25 shillings a week to mind her child.

She asked the archbishop for twenty pounds to pay the agency to arrange the private adoption of her son as otherwise the child would be returned to her and she would be exposed as an unmarried mother.

The archbishop clearly paid the money as a priest who advocated on her behalf, Father Cyprian, wrote to the archbishop on July 19th to thank him for his “very gracious & generous charity.” Father Cyprian was sure that “the girl herself will write to thank his Grace for his great kindness towards her”.

Dr Earner-Byrne said it was the first time she came across a primary source that showed there had been a rape in the Civil War.

Violence against women was carried out by both Crown forces and the IRA in the War of Independence and by pro and anti-Treaty forces in the Civil War.

In another incident during the Civil War, Eileen Biggs, a Protestant woman in Co Tipperary, was “outraged” on seven or eight different occasions by anti-Treaty forces who entered her home while her husband Samuel was locked in a different room.

“If we look at these cars and we explore them, we can learn something about the status of women and how they re going to be treated by the new State.”

The historian Ann Matthew told the documenetary that “until such time as we discuss the reality rather than the romance, we haven’t matured”.

Former army officer Dr Tom Clonan said it was an “indefensible notion” that the War of Independence and the Civil War would be unique among wars in having no aspect of sexual violence. He described it as a “singular anomoly in the history of warfare”.

Ivanov will serve the match OF AZ-Rijeka in the Europa League. Rotor appealed his refereeing in the game with Loko
Gasperini on Ajax: it's not easy for everyone Against them. Atalanta made a great comeback
Real Madrid came away from defeat for the 8th time in a Champions League match, losing by 2 goals. The club has updated its record
Felix on red Bull's double: I enjoy playing in the Champions League the Most
Casemiro about 2:2 with Gladbach: The opponent entered the Real Madrid penalty area twice and scored twice. This is football
Guilherme about 1:2 with Bayern: Loko again showed that he can play against any opponent
Borussia Gladbach coach on Champions League: we could have had 4-6 points. We are not here just to participate
Source https://www.irishtimes.com/news/ireland/irish-news/brutal-civil-war-rape-which-led-to-pregnancy-recalled-in-new-tv-documentary-1.4359660

Cork shootings: Gardaí investigate whether attack was planned by two of the deceased

Covid-19: Contact tracing recruits asked to bring own laptops to work due to HSE delay

A nation takes to its feet: Walking ourselves out of lockdown

CervicalCheck tribunal to be extended due to days of delay

Almost 200,000 children living in consistent poverty across the State

State to ‘regularise’ pay and conditions of school secretaries and caretakers

Your evening longread: Joni Mitchell on love, her career, and recovering from an aneurysm

WATCH: This spooky Irish language video will get you in the mood for Halloween

Further 51,700 to get pandemic payment after Level 5 move

Further 51,700 to get pandemic payment this week after Level 5 move

Normal Halloween celebrations are 'not going to be possible this year I'm afraid', says Holohan

WARNING: Popular chicken goujons recalled due to an undeclared ingredient

Ireland has among the highest wealth per adult in the world

Coronavirus: Too early to say if Ireland has turned a corner, warns Tony Holohan

'No matter if it's true, they want to be first to say it' - McKenna on AFL media as Tyrone career takes flight

Search continues for Cian one month after disappearance

Five@5: Limerick businesses which are still trading during lockdown

What could Donald Trump's legacy be? Join us as we discuss on The Explainer live (in your living room)

Explainer: What exactly are the rules for essential and non-essential retailers and how can they be enforced?

Coronavirus: 13 deaths and 722 new cases of in Northern Ireland

Marts back open for business after IT glitch resolved

Cork shooting tragedy: Postmortems to be carried out as community shocked by deaths in ‘well liked family’

Cork shootings: Postmortems on two of deceased complete with final one due on Wednesday

Trinity's live-stream discussion asks "Is there still an American Dream?"

Sharp increase in confirmed cases of COVID-19 in Galway hospitals