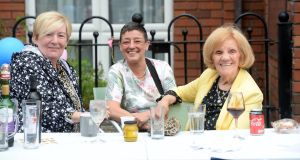 July 4th is a celebration of independence for millions of people in the US. This year, the residents of the Wolfe Tone Close complex in Dublin 1 also celebrated freedom, but the independence they celebrated was their own.

The residents of the north-inner city complex, most of whom are over 70, congregated in the community area with their families for a summer barbecue to toast to the easing of coronavirus restrictions and no longer having to cocoon.

They had pink and blue balloons hung up – similar to what you would see at a baby shower – to celebrate their “rebirth”, while a DJ played music and everyone drank and ate burgers.

Maura Cudden (81) sat at a table with her dog Angel, sipping a glass of red wine. What was she most looking forward to now that she was allowed to mingle with other people? “Getting drunk, of course,” she said with a cheeky laugh, before adding: “I’m only messing, I’m only messing.”

Cudden has lived in her apartment for the past 20 years, but she said having to cocoon had created a community among the residents, who used to only say hello in passing.

“There were phone numbers being put in my letterbox for if I need anything, there was food left on my table, there would be knocks on the door asking if I needed anything because they were going to the shop,” Cudden said. “It was like I adopted a whole new family. It took the edge off cocooning.”

It was not just the community spirit that made the distressing period easier. Her dog did, too.

“I used to take her up when the news was on, I used to listen to it because I wanted to know what was going on. When I’d heard the deaths were very high in the beginning, I used to squeeze her to death because I had nobody else to touch or hold so I used to just squeeze her. She gave me such relief,” she added. 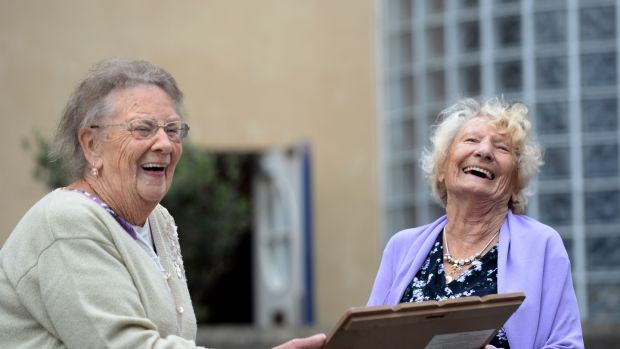 Imelda Dodrill, who proudly declared that she was the oldest resident in the complex, said she found staying still very difficult.

“The lockdown was very hard on me. I celebrated my 90th birthday in May and my family had organised a surprise party, but that never materialised. I worked from when I was 14 until 70, and I like to keep busy. I’m not the type to sit around and stay in,” Dodrill said.

She was not terribly excited about restaurants or bars reopening because she is “well past that now”. However, being able to bring her dog Charlie out for walks again was the best part of society reopening.

“I brought him out straight away, so I did. I love walking. I walk everywhere, I walk for miles. This, now, being able to move again, is marvellous. It’s like another life.” 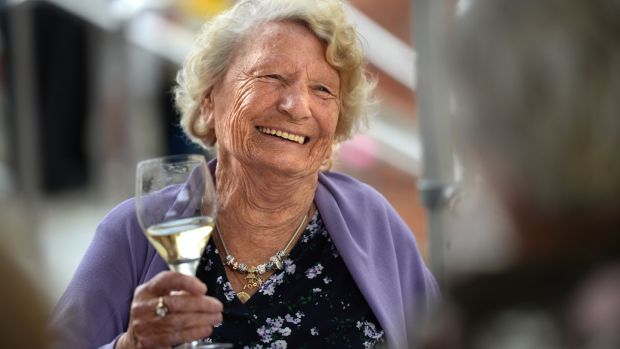 Margaret Murphy (79) said listening to Joe Dolan was the only way she was able to get through the lockdown, and she was glad she could “get back to normal”.

“They told me not to go out so I did what I was told. My daughter lives in west Cork, the other one lives in Carlow and another in Galway. I missed the grandkids,” she said.

Now that she no longer has to stay cooped up in her apartment, she has a long list of things she wants to do.

“I think I might go on a cruise and travel the world. Well, if I can get the money for that,” she added.

We found out how the fascinating logo of Iceland appeared: Game of thrones has nothing to do with it, the source of audacity is the success of the national team
Ronaldo-Casillas: Proud that we shared great moments
Bayern want to sell Boateng in the summer. The club has no offers yet
Solskjaer on the Europa League: a Trophy would be a big step forward for Manchester United. We want to win something
Juve have contacted Zidane, Pochettino, Inzaghi, Spalletti and Gasperini about working at the club. The Real Madrid coach refused
Coach Of Brentford: We went from a mid-level team to the third team of the season. This is an incredible achievement
Burnley are not going to sell Tarkowski for less than 50 million pounds
Source https://www.irishtimes.com/news/ireland/irish-news/cocooning-dublin-residents-celebrate-independence-on-fourth-of-july-1.4296587

'It's demoralising and makes me want to leave': How poor pay is impacting home carers in this 'lucrative' sector

‘John Hume gave us a future to look forward to’: Derry’s young pay tribute to peacemaker

Quiz: How well do you know Derry?

Covid-19: Even though now the trend is upward, it isn’t all bad news

How IT courses helped Tiffany and Megan click onto new skills

Your evening longread: A profile of Donald Trump years before he became president

More than €3bn paid out so far under pandemic unemployment scheme, Minister says

Pubs that do not serve food cannot reopen from Monday, Irish government says

EXPLAINER: How TikTok has taken over our day and the World

Restaurants and pubs serving food will have to close at 11pm from Monday, Taoiseach says

Factcheck: Are dognappers marking targets with stickers on ESB pillars?

Decision to delay pubs reopening will be met with 'fury and despair', publican reps say

BREAKING: One new confirmed case of Covid-19 reported in Limerick

Pubs to remain closed and restrictions on gatherings unchanged

Derry struggles with how to honour local hero John Hume

Court approves €35,000 payment to family of infant who died hours after birth

The Remote: The return of Umbrella Academy, a Belfast thriller, and a pinch of time travel

Coronavirus: 45 new cases but no further deaths reported in the State

Book of Condolences for John Hume opens in Donegal

Breaking: Pubs not allowed to reopen on Monday

Dublinbikes charge to increase by 40% from next month

Dublinbikes annual charge to increase by 40 per cent

'If you said to me, 'Is there more doping in football than we think?' I would say yes'

Explainer: TikTok is on the block but why has Donald Trump given Microsoft 45 days to make a bid?

Inishowen ace is Irish U16 Player of the Year

Man rescued after car enters water in Co Down