about an hour ago Updated: 10 minutes ago 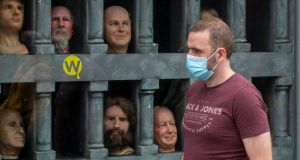 A man, wearing a protective facemask, passes the window of the Wax Museum, Dublin city centre, which remains closed due to Level 3 restrictions to tackle the spread of Covid-19 in Co Dublin. Photograph: Collins Photos

There have been no further deaths from Covid-19 in the State but 396 more cases have been confirmed, according to figures released on Sunday by the Department of Health.

Of the latest cases, 241 are in Dublin, which entered Level 3 controls on Saturday under the Government’s five-stage scheme for Covid-19 regulations.

Prof Philip Nolan, chair of the epidemiological modelling advisory group of the National Public Health Emergency Team (NPHET), said the restrictions were necessary to protect the most vulnerable people in communities.

“High levels of virus in the community increase the risk for older and other vulnerable people,” he tweeted on Sunday.

“The recent rise in cases in Ireland started in younger age groups with very mild disease, but now we are seeing rising cases in older people, hospitalisations and deaths. We had 4 deaths with Covid-19 in all of August, and 18 so far in September.”

Some 26 per cent are confirmed to be associated with outbreaks or are close contacts of a confirmed case, and 58 cases have been identified as community transmission.

In a statement, Dr Ronan Glynn, acting chief medical officer at the department, said: “The cases we are reporting today were seeded in the last week.

“This virus spreads from person to person. We now have a collective task across the country to break the chains of transmission and stop this virus from spreading further.

“Plan to see half the number of people this week that you saw last week. When you do meet, do so safely – keep your distance, wear a face covering if appropriate and wash your hands.

“Every individual action we take to interrupt the transmission of this disease keeps ourselves and our families safe.”

In Northern Ireland, the number of coronavirus cases also continued to rise over the weekend, with 222 more cases recorded by the North’s department of health on Saturday, and a further 176 cases on Sunday.

This brings the total number of confirmed cases in the region to 9,341, including 977 positive results confirmed in the last seven days.

On Sunday, the chair of the Stormont health committee has said there are “areas of grave concern” within the Covid-19 testing system in Northern Ireland.

Colm Gildernew said his committee wants to speak to the North’s Minister for Health Robin Swann over rising case numbers and issues in the testing system.

The Sinn Féin MLA has also urged that answers are provided to the families of five patients who died in the last week as a result of coronavirus outbreaks at two hospitals in the region.

“The families are entitled to know the truth of what has happened in their loved one’s case, but also the health service needs to very quickly learn how this happened and how they can prevent it happening in further settings,” he told the BBC.

Three of the deaths were at Craigavon Area Hospital and two at Daisy Hill Hospital in Newry.

Mr Gildernew outlined some examples of problems within the testing system, including a family who are self-isolating after their child was tested on Thursday – and are still waiting for a result.

“They have been told at times over the phone to speak to people in England, then Scotland, and when they actually got to speak to somebody here they were told that the test hadn’t been found, so those are areas of grave concern and I think they need to be addressed urgently by the minister,” he said.– Additional reporting PA

Metz forward Gyan is the best player in Ligue 1 in September. He is the leader of the goalscoring race
Miranchuk is able to play in almost any club in the world. Ex-midfielder Loko Drozdov about Atalanta newcomer
Bale on Tottenham start: I'm not completely ready yet. I'm trying to get in shape
Ex-Barca coach Sethien can take over at Palmeiras
Fonseca about 2:1 with young boys: Gave a break to some. Now Roma will focus on Milan
Highlight of the month: the Rangers forward scored from 50 meters (the farthest goal in the history of the Europa League). Gerrard says he's never seen anything more beautiful 😍
Mourinho on 3:0 with LASK: Difficult opponent, but Tottenham played so that the victory seemed easy
Source https://www.irishtimes.com/news/health/coronavirus-396-more-cases-as-public-is-urged-to-help-protect-older-and-vulnerable-1.4359834

'I'm the least racist person in this room': The key moments and takeaways from the US presidential debate

We’re all angry, but can we agree to pay student nurses?

As it happened: Trump and Biden dial aggression down a notch in final presidential debate