46 minutes ago Updated: less than a minute ago 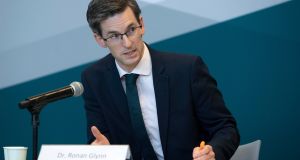 A further 50 confirmed cases of Covid-19 have been reported on Tuesday by the National Public Health Emergency Team (NPHET).

This brings to the 26,303 the total number of confirmed cases in the State.

For the tenth day in a row, no new death were reported by NPHET, leaving the overall death toll during the pandemic at 1,763.

Acting Chief Medical Officer Dr Ronan Glynn said; “I know the decision yesterday not to move to Phase 4 will have been disappointing for many. However, NPHET’s priority must be to control the spread of this virus in our communities and to protect the progress that we have achieved to date.

“Our focus over the coming weeks will be on continuing every effort to slow the spread of the virus so that our schools can reopen, our healthcare services resume, and our nursing homes are protected

The Government on Tuesday decided to delay phase 4 of the reopening society plan due to case numbers.

Meanwhile in Northern Ireland almost 20 per cent of the adult population has downloaded a smartphone app to track the spread of coronavirus.

DUP MP Gregory Campbell said the Stop Covid NI app has been downloaded 170,000 times since it was launched last week.

The app, aimed at interrupting the spread of coronavirus by finding those most at risk of catching it, was the first of its kind to launch in the UK. It alerts close contacts of a patient within a day or two of a positive test.

Mr Campbell praised the take-up of the app, and urged the Department of Health to release results of how many alerts have been generated to users.

Earlier on Wednesday, it emerged more than 6,000 people in Northern Ireland have now tested positive for coronavirus.

The latest figures published by the North’s Department of Health revealed 10 more cases of Covid-19 bring the total to 6,006.

Two patients with the virus are being treated in intensive care beds while there remains three outbreaks at care homes.

However no new fatalities have been recorded in Northern Ireland for almost three weeks, leaving the total death toll at 556 — according to the departmental figures which are based on those who previously tested positive for the virus.

Another set of figures calculated by the Northern Ireland Statistics and Research Agency (Nisra), using information from death certificates, shows the total number of Covid-19-related deaths registered to July 24th was 853.

She said parents are contacting her party’s advice centres and schools “on a daily basis” seeking more information about the return to school.

“Only weeks away from the reopening of schools there is still no clear guidance from the minister,” she said.

Mr Weir published guidance in June aimed at providing a “planning framework for the restart of schools in August/September”.

This guidance states that Primary 7, and Years 12 and 14 should return on August 24th if it is safe to do so, while other year groups should return by the normal school starting date.–Additional reporting PA

Pep about 3:1 with Wolverhampton: Sometimes Manchester City enter the season quickly, sometimes they don't. We played well
Kevin de Bruyne: Wolverhampton have caused Manchester City problems before. I am glad that we played well
Stefano Pioli: Milan are confident, can grit their teeth and fight. Zlatan proves that he is a champion
Ibrahimovic on the Bologna double: If I was 20 years younger, I would have scored a couple more. But I'm not old
Cavani's entourage and Atletico discussed a two-year contract at a hotel meeting
Abramovich is suspected of secretly investing in players of other clubs
Ibrahimovic has scored 23 consecutive seasons at club level
Source https://www.irishtimes.com/news/health/coronavirus-50-new-cases-and-no-further-deaths-reported-in-the-state-1.4322895

‘Take some time to consider the path you want to take’

Safer to meet ‘200 friends in a field’ than 20 indoors, says expert

Taoiseach: Changes allowing people to do some work without losing PUP could form part of Budget

Twitter continues to be ‘toxic’ for women, Amnesty International says

Lost generation? Meet the students graduating into the Covid-19 recession

I find it hard to learn online. How will I survive in college this year?

Quiz: How well do you know these Emmy award-winning TV shows?

Mother and son fined €6.2m over failure to clean up illegal farm dumps

Theresa May insists she will not vote for controversial Brexit legislation

Your evening longread: The sold-out flight that goes... nowhere

Man About Town: You should go to Specsavers! - Patrick McLoughney