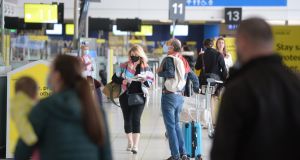 This brings to 1,741 the total number of deaths related to the disease in the Republic.

Nphet also reported a further 11 new cases of the disease, bringing the total number of confirmed cases here to 25,509.

Meanwhile, a leading professor in infectious diseases has said Ireland should get its “own epidemic under control” before it looks at air bridges and foreign travel.

Current Government advice is that all non-essential foreign travel should be avoided, and it will be discussed early next week how travel could resume safely by looking at whether overseas countries could be put on a “green list” if they have low levels of infection.

In recent days, health officials have said they are “very concerned” by overseas travel, with foreign travel accounting for about 17 per cent of new cases, compared with about 2 per cent of cases in previous weeks.

Sam McConkey, from the Royal College of Surgeons in Ireland, said adding a “green list” of countries was an “unrealistic, hypothetical suggestion” because many countries that have eliminated the virus will not let Irish people enter due to the prevalence of the virus in the State.

“What does an outbreak look like when it’s over? What is the definition of an epidemic being over in a country? That’s really no cases for twice the maximum incubation period, we know it’s 14 days incubation period maximum, so 28 days with no cases in our country and then we all take a big sigh of relief and then any other country that has reached that we would say we could safely fly back and forth.”

The green list had been expected to be published next week but sources told The Irish Times this would be postponed until July 20th.

The British government on Friday published a list of 59 countries to which people can travel without facing quarantine when they return to England, but Scotland, Wales and Northern Ireland have not agreed to lift the quarantine rules.

Prof McConkey used the example of New Zealand which has “controlled this virus”, but will not allow tourists from Ireland to enter the country due to the presence of Covid-19 in the State.

He added that giving clarity on what would happen in three weeks’ time was “not realistic” because of how volatile the virus was.

“Catalonia now has an outbreak, Leicester is on lockdown, Lisbon is in lockdown . . . We’ve heard California, Florida and 38 other states in the United States of America now have rapidly increasing rates where it’s hard to control so it’s very difficult [to predict],” he added.

Prof McConkey advocated for the idea of a “staycation” this summer for members of the Irish public.

“The Department of Foreign Affairs advice is very, very clear and it says no non-essential travel outside the island of Ireland. Heather Humphreys brought this idea of a staycation. I’m booked for west Cork and I think that’s what most of us should be doing,” he added.

Speaking on the same programme, Fine Gael TD and Minister of State for Retail Businesses Damien English said the Government was due to meet on Monday to discuss overseas travel.

“Around travel and restrictions and quarantine, that’s going to the full Cabinet on Monday. Every effort is being made here for two issues. One is the public health and to give confidence to people from this country and travelling into this country. The aim is at some stage, be it Monday or at a later stage, to have a list of countries that are safe to travel to and from,” he added.

Matteus on Levandovsky: This is not just the best player in the world. His character and will are unique
Messi trained with a bandage on his left leg. This is a precautionary measure, he will play against Bayern
Karl-Heinz Rummenigge: Neuer is world-class, and Ter Stegen is on the way to it
Chelsea are stepping up negotiations for Havertz after Bayer's relegation from the Europa League, Cech is involved in them
Messi bought a penthouse in Milan. It was reported that Inter is Interested in the player
Real advance refund the Youngster of rental Sociedade. Zidane is impressed with his performance
Barys 20 days before the start of the KHL: they do not know where to play, Legionnaires are cut off from the team
Source https://www.irishtimes.com/news/ireland/irish-news/coronavirus-claims-one-more-life-and-11-new-cases-reported-in-republic-1.4296558

All the latest from busy week at Dunfanaghy Golf Club

Uber and Lyft have 100,000 drivers in California, a court says they must be treated as employees

'Lockdown has only done him good': Sexton hitting form for Leinster

United Limerick and Clare retail plan to be drawn up

Petition calls for Minister to re-establish bus services in Knocknacarra

Fun and easy Irish language phrases to learn during lockdown

Gardaí hunt for man over ‘lewd act’ in public park

In search of US descendants to Great Hunger bride orphans

Fair City set to return to TV screens next month

Maureen O'Hara's "sex scandal" that led to a libel case

Man released without charge after questioning over Tallaght death

Petition aims to add voices to call for water upgrade

Quarter of a million euro allocated to Galway community facilities

Poll: Have you been on or are you planning a staycation this year?

Opinion: 'An unjustified panic against all international travel has developed in Ireland'

Westmeath clubs told that coaches from lockdown counties should stay away

Jump in Covid-19 testing in Donegal

Expired driving licenses to be extended by seven months

Expired driving licences to be extended by seven months

Debunked: No, you will not receive a €1,000 reward from Gardaí for reporting house parties