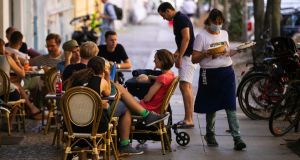 A waitress serves customers on a restaurant terrace in Berlin, Germany, this week. Photograph: Krisztian Bocsi/Bloomberg

Germany and Iceland look set to be removed from the Republic’s “green list” of countries from which people can travel here without having to restrict their movements on arrival.

With rates of Covid-19 rising in most countries across Europe, the incidence in both Germany and Iceland has risen above the threshold of 25 cases per 100,000 of population applied by the Irish authorities when establishing the current make-up of the list only last week.

Germany’s 14-day incidence of Covid-19 increased on Saturday to 25.8 cases per 100,000 of population, while Iceland’s figure is now 47.9, according to the latest data from the European Centre for Disease Prevention and Control.

While the Government also takes into account other factors when deciding which countries go on the “green list”, should current trends continue both countries are likely to be taken off the list when it is updated next Thursday.

The State’s 14-day incidence of the disease stood at 63.2 cases per 100,000 people on Friday, according to the latest epidemiological report from the HSE’s Health Protection Surveillance Centre (HPSC).

However, individual county rates varied from 123.6 per 100,000 of population in Dublin, the current worst-affected county, to 10.7 in Sligo, where the spread of the virus is lowest.

Within Dublin, incidence rates vary from 187.3 in Dublin North-West to 55.9 down in Dublin South, according to the HPSC report.

Over the past fortnight, 102 people – 47 patients and 55 staff – have acquired the virus in a healthcare setting.

During the same period, 3,010 people tested positive for Covid-19, while 85 with the virus were hospitalised, with seven requiring admission to ICU.

Meanwhile, there were 79 patients with Covid-19 in hospital as of 8pm on Saturday, up from 54 a week earlier. Sixteen patients were in ICU, up from 12 in the space of a week.

There are 485 free beds, and 48 free critical care beds, in the hospital system at present.

It is possible the rest of the country will be moved to Level 3 of the Covid-19 restrictions if case numbers nationwide fail to stabilise in a timely manner, Green Party leader Eamon Ryan has said.

Dublin city and county was moved to Level 3 for three weeks this weekend after public health officials gave stark warnings about rising numbers of cases and transmission rates in the capital.

Level 3 restrictions include a ban on social or family gatherings indoors or outdoors, additional restrictions on indoor dining, and people being told not to travel outside their county. No matches or events are allowed at Level 3.

Speaking on Sunday, Mr Ryan said there was concern about counties other than Dublin. “One message that should go out today is that it isn’t just Dublin at the moment which is an issue,” he told RTÉ News at One.

“There are other counties where there are the same sort of characteristics, where community levels are rising, such as Louth, Donegal, Leitrim, Limerick, and still in Kildare. ”

Asked about the possibility of the rest of the country moving to Level 3, Mr Ryan said: “That’s a possibility. We have to be careful. I hope we can avoid that by basically reducing our social contacts.

“I believe we can reverse this. If we get stabilisation of the numbers then we will be able to go back to Level 2 in Dublin and avoid going to Level 3 elsewhere around the country.”

Mr Ryan also defended the State’s testing capacity. “We have a problem in that we now have the virus in our community, and it’s not just as it was a number of months ago where you could identify a certain number of factories or other centres,” he said.

“It [the virus] is out there on a fairly widespread basis. It is not clear where it is coming from. Testing capacity has been increased, and it has been effective.

“Could you do more? Yes, and that’s why the HSE is deploying additional resources in terms of staff. But actually our system is holding up.”

Hans-Dieter flick: I Hope Alaba will sign a contract with Bayern. Our club is one of the best in the world
Diego Maradona: Messi gave Barca everything, brought them to the top. He was not treated the way he deserved
Federico Chiesa: I hope to leave my mark in Juve. We will achieve great results
The Coach Of Benfica: I don't want us to look like the current Barcelona, it has nothing
Guardiola on returning to Barca: I'm happy at Manchester City. I hope to stay here
Fabinho will not play with West ham due to injury
Ronald Koeman: Maradona was the best in his time. Now the best Messi
Source https://www.irishtimes.com/news/health/coronavirus-germany-and-iceland-look-set-to-be-taken-off-green-list-1.4359794

Most face masks to protect against coronavirus do not meet standards

Toy shop operator: Kids ‘may have to take what they are given’ this year

Tidy Towns cancellation: ‘The town is the worse for it’

At least 14 dead as strong earthquake hits Turkey and Greece

Nearly €40,000 worth of drugs discovered in packages labelled as clothing items in Athlone

After injury and lockdown, Eoghan Ban Gallagher is ready for Championship tilt

Waste firm fined €60,000 over death of worker in crush incident

'Children will be able to get clothes': Taoiseach says retailers should take compassionate approach

Appeal for photos of rare ‘blue moon’ this Halloween

WATCH: 'The truth must come out': Protest in Limerick over sealing of mother-and-baby home records

Q&A: Why was the Commission into Mother and Baby Homes set up and what did it examine?

PSNI considering whether to inquire into three £10,000 payments to Sinn Fein

Eurozone: Stormy weather ahead despite a better-than-expected third quarter rally in GDP

'The shock, the numbness, the devastation': First funerals for members of O'Sullivan family held today

Illegal fireworks: ‘People are realising the harm they can do’

'Most nights, I cried myself to sleep': Former Wallabies prop Palmer pens powerful column on his sexuality

Gates at Dublin’s Phoenix Park to close over weekends