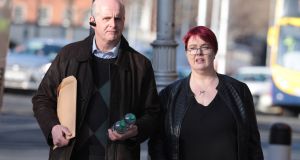 In their High Court challenge, Cornelius and Suzanne Dennehy from Fossa, Co Kerry claim the planning board’s decision over access to the lake was irrational. Photograph: Collins Courts

A couple want the High Court to quash a decision by An Bord Pleanála over use of a laneway beside their home which has been at the centre of a long running row over access to a lake.

Cornelius and Suzanne Dennehy, who live and farm near Fossa village in Co Kerry, want the court to quash an August 2018 decision of the board declaring that a gate erected by them at the entrance to lands they own requires planning permission.

The lane leads down to the shore of scenic Lough Leane and links to the N72 Killarney-Killorglin Road. It also provides access to a number of houses and to the Loch Lein Country House Hotel, owned by Dr Donal Coffey.

The Dennehys’ judicial review case, being heard by Mr Justice Charles Meenan, is against the board, the Minister for Housing Planning and Local Government and the State over the decision. Dr Coffey is a notice party.

The court heard the land in question is owed by the Dennehys and their neighbour Maurice O’Connell who, up until 1989, was supportive of the Fossa Rowing Club using the lane to access the lake.

Mr Dennehy also allowed them to use it up until 1993 until he claimed some members of the club exceeded their permission and insisted they had a right to use it.

The Dennehys erected a gate to prevent trespass in 2010 and no trespassing signs were also erected.

But by 2012 there were increasing incursions which became confrontational and gardaí had to be called.

Among the incidents were an assault and the shooting of his dog, the court heard. Local boat groups were now asserting a public right of way even though it was private land.

In 2011, Circuit Court proceedings brought by the rowing club and by Mr O’Connell seeking the removal of the gate and declaration of a right of way were dismissed. An appeal by the boat club against that decision was discontinued.

Dr Coffey gave evidence in that case on his own behalf and that of the club.

Dr Coffey then made an application to Kerry County Council under the Planning and Development Act for a decision on whether the erection of the gate was exempted development.

The council referred it to the board which decided it was development. Among the board’s reasons was the gate was “habitually open to or used by the public” during the preceding ten years when it was a means of access to the lake.

In their High Court challenge, the Dennehys claim the board’s decision was irrational.

It is claimed the board misconstrued the regulations, its decision was not in accordance with law and it could not make what amounts to a finding of a right of way. The board and the Minister deny the claims. The case continues.

Two bags, no English, many doubts and a treble – but Pascal Vaudequin found ‘home’

Coronavirus: Third-level students will not have to sit traditional exams

Students’ qualifications will not be undermined by cancellation of exams

Labour Party: Kelly knows division push for government would cause

Coronavirus: Renewed appeal not to travel ahead of Easter weekend

Over 1,500 older Irish people volunteering from home during Covid-19 crisis

Coronavirus: Need to ‘double down’ on restrictions after record deaths

A friend recommends: Sarah Rowe on her favourite books and TV shows at the moment

'It simply isn't true': Health officials dismiss US report which says Ireland is past Covid-19 peak

Your evening longread: How MySpace changed the face of music

Coronavirus: Ireland’s infection peak has passed, but death toll could hit 400 by May, report says

Quiz: How well do you know the James Bond films?

GOAL: We hope to learn lessons from the west when tackling any African Covid-19 outbreak

Covid-19: Ireland is still way short of its testing targets, but where do we rank globally?

HSE has failed to honour a contract to pay for medical ventilators, court hears

16 additional cases of Covid-19 in Galway

The Remote: The Big Fella, ancient Egypt, and a pig - your weekly TV guide

When the COVID-19 pandemic is over, will we remember...

Taoiseach pleads with people to avoid holiday homes this Easter

'The flippin’ pressure I’m under...please win for me' - The challenges of being an Irish manager in Ireland

WHO: Wearing facemasks can limit Covid-19 spread but could also 'create a false sense of security'

Elderly and vulnerable reach out as helplines receive 8,000 calls for assistance

Health websites may be sharing information ‘without lawful basis’

Explainer: The UK doesn't have the equivalent of a tánaiste, so who's in charge right now?

Refund scheme for commuter tickets being considered by NTA

Stargazers to look out for ‘Pink Super Moon’ tonight