Covid-19: Travel restrictions unlikely to be lifted before July 20th 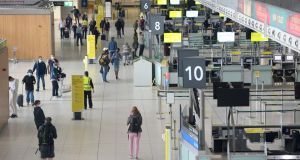 Passengers arrive at Dublin Airport. The belief in Government is that it cannot prevent people from going abroad on holiday. Photograph: Dara Mac Dónaill

Your Web Browser may be out of date. If you are using Internet Explorer 9, 10 or 11 our Audio player will not work properly.
For a better experience use Google Chrome, Firefox or Microsoft Edge.

Travel restrictions, including quarantine requirements and official advice not to travel abroad, are likely to remain in place until at least July 20th amid fears that a resurgence of Covid-19 infections in other countries could be imported to Ireland.

The publication of a “green list” of countries to which it is safe to travel will not happen next week, as had been expected, and will instead be postponed until July 20th, before which the Government will review the public health advice.

Until then, the current status quo will apply, sources said.

A meeting of the Cabinet committee on Covid-19 on Friday was advised that concerns about possible resurgence of the virus in some countries means that the existing travel advice should remain unchanged. The full Cabinet is scheduled to meet on Monday to discuss the issue, but sources indicated that the restrictions are likely to remain in place.

It had been expected that travel restrictions would be relaxed next week and that a safe list of countries where holidaymakers could travel without being required to quarantine for 14 days on their return would be published. However, this has now been put back until July 20th at the earliest. The restrictions will be reviewed fortnightly after that.

Sources said that the cautious approach by the new Government was in part because of the priority it wished to give to reopening schools as fully as possible in September.

While the belief in Government is that it cannot prevent people from going abroad on holiday, the official advice not to travel unless it is an essential journey will be reiterated in the coming days.

Warnings at the State’s airports about the necessity for incoming travellers to observe the 14-day quarantine are likely to be enhanced, while the Garda launched Operation Navigation on Friday evening under which pubs and licensed premises will be checked for adherence to Covid-19 health guidelines.

The Cabinet committee heard concerns about levels of compliance within pubs, and the Government will consider a report on the matter from the Garda and health authorities at its meeting on Monday.

“Strong enforcement measures will be taken against premises that are not operating in accordance with public health guidelines,” according to a Government statement.

About 60 per cent of pubs in Dublin and 40 per cent in the rest of the country reopened on Monday, 15 weeks after being ordered to close their doors due to the pandemic. 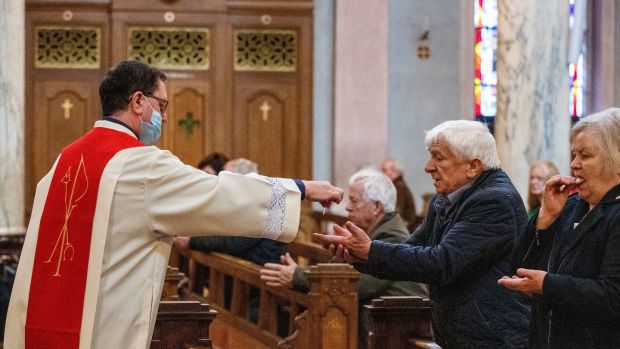 A priest hands out Holy Communion to parishioners at the Cathedral of Saint Patrick and Saint Felim, Cavan, as places of worship across Ireland were able to welcome back some members of their congregations for services on Monday. Photograph: Liam McBurney/PA Wire

New guidance has also been developed for religious services, with attendance of more than 50 permitted in certain circumstances.

An assessment will have to be carried out for each premises to determine how many can attend within the requirements of social distancing.

The premises will also have to be subdivided into distinct sections, either by cordons or other markings, with a maximum of 50 people in that area.

There can be strictly no movement of people between the sections before, during or after the service.

Each area must have its own entrance or exit route and there will need to be separate arrangements for elements of the service involving close contact such as for the distribution of Holy Communion.

The use of face coverings in such indoor settings will also be “strongly recommended”.

Meanwhile, a new report says Dublin has outperformed even best-case scenarios for limiting deaths among homeless and drug user populations during the pandemic.

As a result of “quick, decisive action”, only 63 homeless people in Dublin were diagnosed with Covid-19 and there was one death linked to the disease, the report from the London School of Economics and Ana Liffey Drug Project states.

A pragmatic and well co-ordinated Government response alongside housing provision and the expansion of harm reduction services saved lives and ensured the protection of a vulnerable group, it says.

Another two people diagnosed with Covid-19 have died, the National Public Health Emergency Team reported on Friday. This brings to 1,740 the total number of deaths related to the disease in the Republic.

The team also reported a further nine cases of the disease, bringing the total number of cases to 25,498.

Goretska Pro 8:2 with Barca: This is only the first of three steps
Matteus on the defeat of Barca: it is Painful to see what happened to the team that inspired us for so many years
Bartomeu met with Pochettino this week. He could replace Sethien at Barca
Salihamijic Pro 8:2 with Barca: Bayern are very happy, but they want more
Recently, Mueller did not want to renew his contract with Bayern. Now he's turning the football around
The baby may get angry and leave. Luis Suarez Miramontes about Messi
Joan Laporta: bartomeu's Words are a manifestation of cowardice and failure
Source https://www.irishtimes.com/news/health/covid-19-travel-restrictions-unlikely-to-be-lifted-before-july-20th-1.4295887