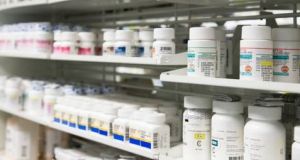 MFI says Irish patients did not experience shortages of drugs and medicines as a result of the pandemic. Photograph: Getty Images

The impact of Covid-19 and Brexit could pose a risk of a shortage of medicines in the months ahead, representatives of key parts of the pharmaceutical industry in Ireland have warned the Government.

In a letter to Ministers, Medicines for Ireland (MFI), the pharmaceutical trade association representing companies that supply generic, off-patent and bio-similar drugs to the HSE and patients, highlighted that stocks were being eroded.

The letter warned that there was a serious concern that the medicine reserves of Irish suppliers “have been seriously depleted because of the unprecedented surge in demand from the Covid-19 pandemic and the added pressure this has put on the global supply chain of medicines”.

“Reserves in store have been seriously eroded, and there is now a real danger that a ‘no-deal’ Brexit will further impact medicine supplies in Ireland.

“The combination of stockpiles being depleted during the Covid-19 pandemic, the disruption to international production of generic medicines in Asia, and the risks of a second wave interrupting global supplies this year has raised huge concerns with our members.”

The association also maintained that its member companies were now facing a much higher cost of delivering medicines to Irish patients.

“A further shock, such as a ‘no-deal’ Brexit, will severely impact on the ability of our members to deliver large quantities of lower-cost medicines to the HSE and to patients.”

The association on Wednesday said it had put proposals to Government to deal with the potential situation, and while there was a risk of shortages it was confident that these could be averted.

MFI is looking for new procurement arrangements which would “give certainty” to suppliers about the amount of drugs and medicines which the HSE would take each month, as well as “ risk-sharing” arrangements.

The organisation said governments in the UK and elsewhere in European had put in place new arrangements for the provision of drugs and medicines.

In the UK a Covid procurement resilience plan sought supplies of over 50 medicines between September and December, with companies paid in advance of shipping and with higher prices for early delivery.

MFI suggested that as an alternative to joint procurement there could either be a European or an Irish “medicines reserve” established.

Under such a system either the HSE, in an Irish system, or the European Commission, in an EU-wide arrangement, would buy medicine for a worst-case scenario, which would be maintained by the industry.

The sector is also seeking that the EU and the UK conclude at least a mutual recognition agreement, or another similar solution, on regulatory processes and standards to come into effect after Brexit.

MFI said Irish patients did not experience shortages of drugs and medicines as a result of the first phase of the pandemic.

The pharmaceutical sector had already been preparing for the challenges of Brexit and to deal with the problems of Covid.

Innovative solutions and flexible arrangements were agreed with regulators and agencies such as the introduction of “pharma green lanes” for products passing through ports and airports.

MFI urged the Government to maintain “essential worker status” for pharmaceutical industry staff and suppliers during any future Covid challenges, and for the “green lanes” at ports and airports to continue.

“We should take a balanced view on pricing modulation of medicines in Ireland. Whilst the average price of a packet of medicine has fallen from €18 (2012) to €6 (2018) and our members have been key to delivering these savings of €2 billion to the Irish State in recent years, our ingredient and transport costs have risen significantly during Covid,” it said.

Flick on Bayern's Interest in Kramaric: I know him well, but I haven't heard anything about it
We have three clubs in this group stage of the Champions League. How did campaigns with two end up?
Solskjaer on transfers: No news. Working with what we have, Manchester United have a big squad
Guardiola confirmed that Zinchenko will stay at Manchester City
Bayern won 5 trophies in a year. To repeat the record Barca need to take another
Flick took 5 trophies with Bayern after 40 matches
Marcel: Alvaro Gonzalez is not a racist. Any accusations against him are unfair and unfounded
Source https://www.irishtimes.com/news/ireland/irish-news/covid-and-brexit-could-pose-risk-to-medicines-supply-says-pharma-sector-1.4323127