ONLY 59% OF climate measures that were due to be completed between January and March were delivered on time, with the Department of the Environment reporting the worst completion rate of any department, according to a new government report.

A long-term climate strategy, which was supposed to be compiled and submitted to the European Union, is still yet to be done, leaving Ireland one of only five EU countries without one.

Under the Climate Action Plan 2021, government departments, along with agencies like Teagasc, the Office of Public Works and Fáilte Ireland, are responsible for a suite of broad-ranging actions aimed at reducing Ireland’s greenhouse gas emissions to help prevent climate catastrophe.

A progress update published today outlines that 84% of measures that were earmarked for completion between October and December 2021 were completed.

However, only 59% of actions due to be completed between January and March of this year were delivered on time.

A government statement said key reasons for delays were “administrative and capacity constraints; desires for alignment with other measures; technical complexity; stakeholder consultation and the pace of the legislative process”.

Across both quarters, the Department of the Environment, Climate and Communications (DECC) performed the poorest of any government department, delaying 42 of 102 actions. 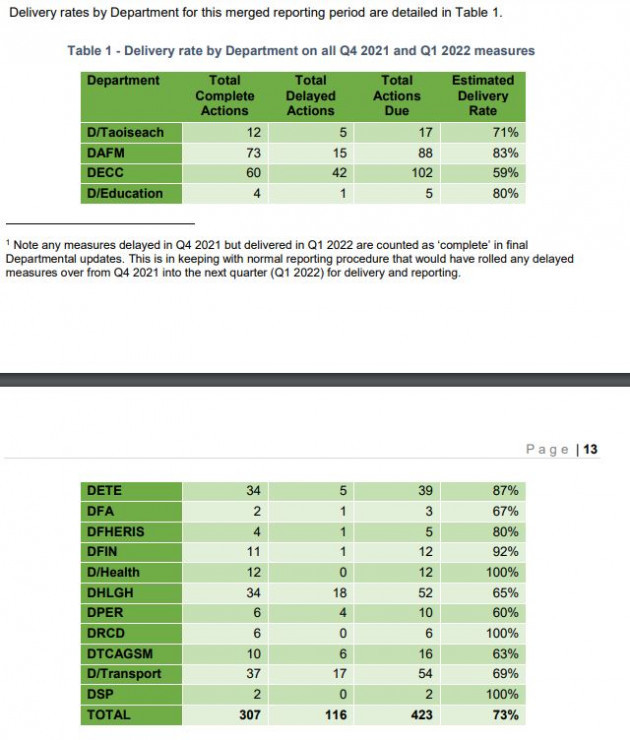 The department responsible for the second-highest number of actions – the Department of Agriculture, Farming and the Marine, with 88 actions due – delivered 83%.

The Department of An Taoiseach was responsible for 17 actions, of which it delayed five and completed 12 (71%).

The Departments of Health, Regional and Community Development, and Social Protection, which were responsible for only 12, six, and two actions each respectively, all completed 100% of the measures in their remit.

In a statement, Taoiseach Micheál Martin said that the government must close gaps in delivering on climate action.

“We must redouble our efforts to create a cleaner, more sustainable, and climate neutral Ireland, richer in biodiversity, for future generations,” the Taoiseach said.

“The Climate Action Plan is working towards that goal of more resilient and liveable villages, towns, coasts, countryside and cities,” he said.

We must now further build up capacity to meet the challenges of climate action and close gaps on delivery across the system.”

Ireland is one of only five EU member states that has not yet submitted a long-term climate strategy to the European Union, along with Bulgaria, Cyprus, Poland and Romania.

The strategy is the first item listed in the Climate Action Plan’s annex of actions and was due to be finalised by the end of the first quarter of this year.

The new progress update report says there were “delays arising from requirements to align with domestically legislated climate ambition” and that the DECC intends to complete it in the second quarter of the year, which would be by the end of this month.

The government also failed to review departments’ capacity to ensure that people and systems are enabled to deliver on climate action, which was attributed to “delays [that] were encountered in Q1 2022 due to the recruitment of external expertise to assist with its delivery”.

That item is now also forecast for completion by the end of June.

A new strategy on Education for Sustainable Development due in the first three months of the year has not yet been delivered.

The strategy forms part of the government’s steps to increase climate literacy under the Climate Action Plan, which outlined that a better understanding of climate issues would “enhance our capacity to make small changes in our daily lives, to engage with climate action at a local level, and to participate at national level in the co-design of policy”.

Current climate education in schools has been described as “dismal” and “inadequate”, with teachers, students and experts keen to see an overhaul.

The progress report said finalising the strategy encountered “some slight delays” and that it should be completed in this quarter.

Other delayed actions include:

The proposal of Ireland’s first-ever carbon budgets in November is considered to be among the ‘high-impact’ actions that have been completed.

The Climate Change Advisory Council (CCAC) put forward carbon budgets that set limits on the amount of greenhouse gas emissions Ireland must stay under to cut emissions in more than half by 2030 and to net zero by 2050.

The Dáil approved the budgets in April after lengthy consideration by government and the Oireachtas Committee on Climate Action.

The board is comprised of secretaries general from government departments and is tasked with monitoring whether climate actions are being achieved and reporting back to the government on progress.

The Department of Transport published a new sustainable mobility policy, worked on implementing BusConnects in Dublin, and published an updating policy statement on renewable fuels that sets out the planned level of biofuel use to the end of the decade.

The Department of Agriculture concluded negotiations with the EU Commission on the Nitrages Action Programme and submitted a draft Common Agricultural Policy Strategy Plan.

Other actions that were completed include:

In a statement, Minister for the Environment Eamon Ryan said that the action achieved to date “set us on the right path towards emissions reduction, but will also lead to a number of social and economic benefits for people across Ireland”.