THE DEPARTMENT OF Foreign has fielded a number of calls from Irish citizens in Beirut following a large explosion which killed more than 100 people and injured thousands more.

The blast at a warehouse alongside the Port of Beirut in the Lebanese capital was felt hundreds of kilometres away from the port, and registered as the equivalent of a 3.3 magnitude earthquake.

Lebanese authorities suggested the cause of the explosion was 2,750 tonnes of ammonium nitrate, an agricultural fertiliser, that had been stored for years in a portside warehouse.

A number of NGOs have Irish teams working in Lebanon on humanitarian missions.

The Department of Foreign Affairs today confirmed that it has been contacted on a number of occasions for advice but it has not received reports of any Irish men or women injured in the blast.

“The Embassy of Ireland in Cairo has been monitoring the situation in Beirut since yesterday,” a spokesperson said.

“We have received a number of calls with no reports of serious injuries to Irish citizens.

It said that Irish citizens in the region can contact the Department of Foreign Affairs on 01 408 2527 if they require advice or assistance. 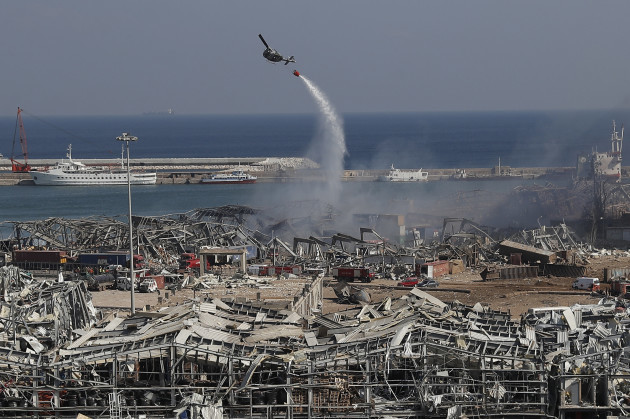 An army helicopter drops water at the scene of the explosion that hit the seaport of Beirut, Lebanon. Source: Hussein Malla

Irish peacekeeping troops are also working in the region but TheJournal.ie understands the troops are located a significant distance from the city.

A spokesperson confirmed that “all our personnel are accounted for and are safe”.

Ireland is one of 45 countries involved with the United Nations’ UNIFIL operation which works to provide humanitarian support and maintain peace.

A statement from UNIFIL following the blast said: “As a result of a huge explosion that rocked Beirut Port this evening, one of the UNIFIL ships of the Maritime Task Force docked in the port was damaged, leaving some UNIFIL naval peacekeepers injured – some of them seriously.

“UNIFIL is transporting the injured peacekeepers to the nearest hospitals for medical treatment. [We are] currently assessing the situation, including the scale of the impact on UNIFIL personnel.”

UNIFIL’s Head of Mission and Force Commander Major General Del Col said: “We are with the people and the Government of Lebanon during this difficult time and stand ready to help and provide any assistance and support.”

Jesus Navas Pro 1:2 with Bayern: Equal game, just not our night
Klopp on Jones' double: I'm sure we'll be happy with it
Khedira will terminate his contract with Juve next week. The club may sell Douglas Costa
Koloskov about Rostov's departure from the Europa League: Maccabi was playing football, and our guys were shooting somewhere, some chaos
Thomas Muller: As expected, Sevilla was a tough opponent
Javi Martinez on the winning goal in the UEFA super Cup match: It was like in 2013, when I also scored
Hans-Dieter flick: Bayern players had to overcome the pain threshold to beat Sevilla
Source https://www.thejournal.ie/dept-foreign-affairs-beirut-calls-blast-lebanon-5168144-Aug2020/

Covid-19: Warning of similar measures for other counties as Donegal moves to Level 3

Séamus Woulfe: The last man standing in Golfgate is set to learn his fate

‘Technology was always an interest of mine’

‘Be open minded, adaptable and learn from the people around you’

‘Time management is essential to my work life’

“Working life is about collaboration and team work”

Should Ireland be like Sweden or New Zealand? Experts disagree on the next steps in the pandemic

Sorting out your life? There’s an app for that

Time to choose: job or internship?

Rare 1880s Irish whiskey to go under the hammer

Traffic figures for Dublin ‘slightly down’ on pre-Level 3 restrictions

No deadline set for restoration of Shelbourne Four statues

Just over 16,000 new cases of Covid-19 confirmed in France today as new restrictions come into effect

Ban on evictions should be reintroduced for six months, says housing charity

Covid-19 Q&A: How are we doing now and is there any good news?

Next 10 days critical in fight against Covid-19 in Cork, says advisor

Next 10 days critical in fight against Covid-19 in Cork, says adviser

'Go back to your own country': Family forced to flee Dundalk home after attacks on mother and son

Donegal TDs encourage public to “get ahead” of Covid virus

Co Donegal to be elevated to Level 3, placed under new COVID restrictions

Your evening longread: The long-running influence of Enya

A tribute to Rob Kearney: the history maker who kept coming back for more

Decision on curfew for hospitality sector in NI postponed

'The highest in the country': The stark numbers behind Donegal's move to Level 3

'No other choice than to act': Donegal to be placed under Level 3 restrictions after spike in Covid-19 cases

Gardaí seize €3.5 million worth of cocaine in north Dublin

Covid-19 and nursing homes: ‘Will we ever be able to hug our families again?’

Former councillor found NOT guilty of attacking ex-Garda with brush

Covid-19: Ireland has a concerning trend for virus, says ECDC

Confirmed: Donegal moves to Level 3 restrictions from midnight on Friday

Gardaí issue fatal crash appeal on behalf of the PSNI

Hundreds more detained in Belarus over protests against president

WATCH: Fundraising event 'drives thru' support for Limerick charity in its hour of need

‘Unconscionable’ for healthcare worker not to get flu vaccine, says Reid

INTO calls time on supersized class sizes in Limerick