Pope Francis, the Clintons and the Dalai Lama united in praise of former SDLP leader 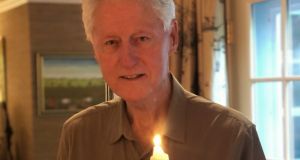 Bill Clinton with a candle lit in honour of John Hume.

Under normal circumstances, thousands would have been expected to attend the funeral of John Hume in Derry on Wednesday, both local people and dignitaries from around the world.

However, the coronavirus regulations meant the numbers inside the church were limited to about 120, and nobody – including one of Mr Hume’s sons, Aidan, who lives in the US – travelled from abroad. Instead, the Bishop of Derry Donal McKeown, read tributes sent by prominent figures.

Bill and Hillary Clinton: “We were deeply saddened by the passing of our friend John Hume, who fought his long war for peace in Northern Ireland, his chosen weapons an unshakeable commitment to non-violence, persistence, kindness and love.

“With his enduring sense of honour he kept marching on against all odds towards a brighter future.

“He was Ireland’s Martin Luther King.”

Pope Francis: “Mindful of the Christian faith that inspired John Hume’s untiring efforts to promote dialogue, reconciliation and peace among the people of Northern Ireland, His Holiness commends his noble soul to the loving mercy of Almighty God.

“To those who mourn his passing in the sure hope of resurrection, the Holy Father cordially imparts his apostolic blessing as a pledge of consolation and strength in Christ the Lord.”

Boris Johnston: “Last night a candle was lit and placed in the door of Downing Street to pay respects to John Hume, the symbol of the peace he worked so tirelessly to build.

“The world has lost a giant of a politician who was recognised the world over for the immense contribution he made to Northern Ireland.

“We should never forget the lasting impact he made and will continue to have on Northern Ireland. His unending determination and courage paved the way for peace and, because of all he did then, Northern Ireland is a safer, stronger and better place. This will be his legacy.”

Dalai Lama: John Hume’s “deep conviction in the power of dialogue and negotiations in resolving the problem in his homeland has been an example of non-violent resolution of issues.

“It was his leadership and his faith in the power of negotiations that enabled the 1998 Good Friday Agreement [Belfast] to be reached. His steady persistence set an example for all of us to follow.

“His message about peace and non-violence in the resolution of conflict, no matter how protracted or difficult it may seem to be, will long survive him. He lived a truly meaningful life.”

Bono: “We were looking for a giant and found a man whose life made all our lives bigger.

“We were looking for a negotiator who understood that no one wins unless everyone wins...and that peace is the only victory.

“We were looking for joy and heard it in the song of a man who loved his town so well and his missus even more.

“We were looking for a great leader and found a great servant.

Gary Neville: Manchester United won't win the Premier League until they sign a mobile centre-back
Van de Beek after 1:3 with Palace: Happy to make his debut for Manchester United, but disappointed with the result
Jurgen Klopp: Transfer activity shows Chelsea's ambitions
Andrea Pirlo: I'm in Juve and I work with a team full of Champions. I have no doubts, only confidence
Even Zidane listens to Marseille rap. The city is steeped in hip-hop, and the club promotes aspiring rappers
Leicester loaned Under until the end of the season
Robertson on Messi: He will be considered one of the best ever along with Maradona and Pele when he finishes
Source https://www.irishtimes.com/news/ireland/irish-news/dignitaries-send-tributes-to-hume-funeral-from-around-the-world-1.4323098

Career Guidance with Rory White: What if I didn’t get a CAO offer?

Sitdown Sunday: Could Friluftsliv save our Covid-19 winter?

'It's so astounding that a woman can disappear to that extent': Rediscovering the author of Ireland's greatest love poem

India set to overtake US as country worst hit by coronavirus

Larry Donnelly: The country of my birth is broken. Can it be fixed?

'A lack of regard for our community': Row erupts over social housing development in Donegal

Hole in one for Bernard Foy at Ballybofey & Stranorlar Golf Club

Quiz: How much do you know about eggs?

Covid-19: Archbishop of Dublin voices worry about parishes trying to ‘get Confirmations done’

Opinion: The road ahead is a bleak one when it comes to climate change

Man who was very drunk in Limerick village takes the pledge

Policing Covid-19: What enforcement powers do gardaí have?

'These are communities which are extremely violently misogynistic': Investigating the world of incels, pick-up artists and men who hate women

‘They put me on’ – club’s Twitter updates stop, but with good reason!

‘Only group of people that can make sure Limerick does not slip backwards, are Limerick people’

ASTI to ballot for industrial action over Covid-19 safety concerns

Coronavirus: No further deaths and 274 new cases - including 166 in Dublin

Prime Cratloekeel lands to go under the hammer

Trump calls for Senate to consider his Ginsburg replacement ‘without delay’

Emergency services at scene of two-vehicle crash in Donegal

Cyclist dies after collision with car in north Dublin

Connemara South has highest incidence rate of Covid-19 in Galway

REVEALED: New data shows which areas of Limerick have the highest rate of Covid-19