MINISTER FOR TRANSPORT, Climate, Environment & Communications, Eamon Ryan has dismissed a claim by independent TD Richard O’Donoghue that Ryan had a state car bring his bike almost 200 kilometres to Limerick.

O’Donoghue’s claim was made during a Dáil debate on Transport, Accelerating Sustainable Mobility on Thursday 31 May started by Minister Ryan.

Near the end of the debate, the Limerick County TD said:

“The Minister for Transport, Deputy Eamon Ryan, came to Limerick on a train and sent down the State car with his bicycle in the boot. That is what he does while he is talking about carbon emissions. He sends down a State car. He cycled down the main street of Limerick thinking he was a great man.”

O’Donoghue went on to say about Ryan: “I reckon that with his CV, he would not even qualify to be a clown in the circus because of his lack of understanding of Ireland and the people of Ireland whom he is supposed to be representing”. 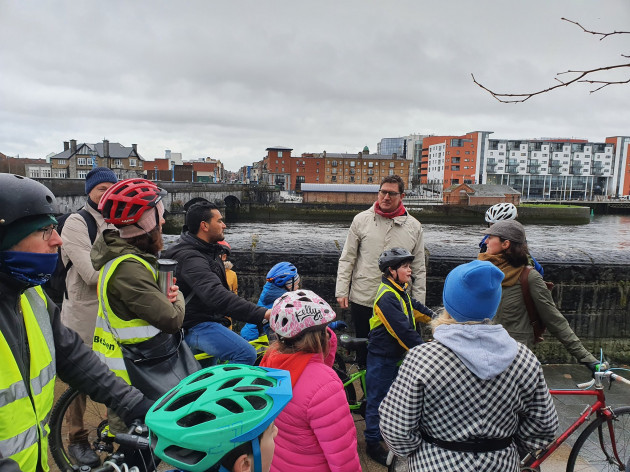 Minister Ryan at the event in question, in which he cycled to school with Limerick primary school students.

Ceann Comhairle, Seán Ó Fearghaíl, said that it was unfair for O’Donoghue to speak about Ryan in this way because he wasn’t present.

The Green Party leader addressed O’Donoghue’s claims with a series of Tweets yesterday evening, claiming that he had borrowed a bike for the Limerick School Cycle Bus event in March.

I drove down to Limerick in my own car where II borrowed a bike from a local Green Party member in order to help promote the Limerick School Cycle Bus which does an amazing job organising a daily school run by bike for children and their parentshttps://t.co/t19EM9NVmv

“I drove down to Limerick in my own car where I borrowed a bike from a local Green Party member in order to help promote the Limerick School Cycle Bus which does an amazing job organising a daily school run by bike for children and their parents,” he wrote.

He added that if he was intending to bring his own bike from Dublin to Limerick he would have gotten a train and used a bike storage carriage on Irish Rail.