A PUB IN England has managed to open despite a car crashing into its front in the early hours, the landlord said.

The Swan Inn at Little Chart, near Ashford in Kent, will still be able to serve pints to customers outside despite the landlord being woken by the devastation at around 2am this morning.

Ray Perkins told the PA news agency: “It was absolutely devastating because obviously we were opening today.

“We’ve had everybody rally round and clear up the bar, every single glass has had to be washed again.”

He added: “We’ve got open, we’ve managed to open the pub – not inside, only outside.”

Perkins said he was “absolutely gutted” and “exhausted” by the incident, but was determined to open up for his customers. 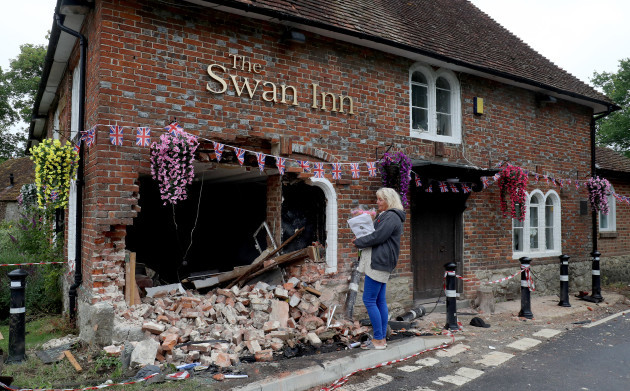 The Landlady of The Swan Inn in Ashford, Kent, looks at the damage to her pub Source: Gareth Fuller/PA Images

He continued: “We’ve worked hard for the last god knows how many weeks now to get it ready for today.

“At 2am they basically nearly destroyed today for us, but that’s life.

“We just didn’t want to let anyone down because we’ve got 200 people booked to come and eat and drink outside and be merry on the first day of opening.”

Kent Police said they were called to the scene shortly before 2.25am alongside paramedics and the fire service.

Three 17-year-old boys inside the car were taken to a local hospital and treated for minor injuries.

One of them has been arrested on suspicion of taking a vehicle without consent and drink driving. He remains in custody.

Pubs across England have been allowed to reopen from today as the coronavirus lockdown restrictions were relaxed.

Restaurants, bars and cinemas have also been allowed to welcome customers for the first time in three months.

Pubs in Wales and Scotland must remain closed until later this month as the devolved nations are lifting their own lockdown rules more slowly, but hotels, bars, restaurants and cafes in Northern Ireland reopened yesterday.

Coach Of Brentford: We went from a mid-level team to the third team of the season. This is an incredible achievement
Burnley are not going to sell Tarkowski for less than 50 million pounds
Lester wants to rent Trincou at Barca with the obligation of ransom for 50 million pounds
Scott Parker: Fulham have a lot to progress. And I am happy about it
Manchester United are threatening to pull out of negotiations for Sancho if Borussia do not reduce the price from 120 million euros
Cesc about Casillas: You are a mirror to look into
Lone mascots are another symbol of the year
Source https://www.thejournal.ie/english-pub-5141594-Jul2020/

'It's demoralising and makes me want to leave': How poor pay is impacting home carers in this 'lucrative' sector

‘John Hume gave us a future to look forward to’: Derry’s young pay tribute to peacemaker

Quiz: How well do you know Derry?

Covid-19: Even though now the trend is upward, it isn’t all bad news

How IT courses helped Tiffany and Megan click onto new skills

Your evening longread: A profile of Donald Trump years before he became president

More than €3bn paid out so far under pandemic unemployment scheme, Minister says

Pubs that do not serve food cannot reopen from Monday, Irish government says

EXPLAINER: How TikTok has taken over our day and the World

Restaurants and pubs serving food will have to close at 11pm from Monday, Taoiseach says

Factcheck: Are dognappers marking targets with stickers on ESB pillars?

Decision to delay pubs reopening will be met with 'fury and despair', publican reps say

BREAKING: One new confirmed case of Covid-19 reported in Limerick

Pubs to remain closed and restrictions on gatherings unchanged

Derry struggles with how to honour local hero John Hume

Court approves €35,000 payment to family of infant who died hours after birth

The Remote: The return of Umbrella Academy, a Belfast thriller, and a pinch of time travel

Coronavirus: 45 new cases but no further deaths reported in the State

Book of Condolences for John Hume opens in Donegal

Breaking: Pubs not allowed to reopen on Monday

Dublinbikes charge to increase by 40% from next month

Dublinbikes annual charge to increase by 40 per cent

'If you said to me, 'Is there more doping in football than we think?' I would say yes'

Explainer: TikTok is on the block but why has Donald Trump given Microsoft 45 days to make a bid?

Inishowen ace is Irish U16 Player of the Year

Man rescued after car enters water in Co Down

Delay in setting up addiction treatment services ‘will cost lives’

Work to start on Merlin Park ambulance base

Court approves €35,000 payment to parents of boy who died before birth

Court approves €35,000 payment to parents of boy who died after birth

No confirmed cases of Covid-19 in Galway hospitals

Amazon gets green light from watchdog to buy stake in Deliveroo