MORE THAN 100 people were killed and about 4,000 others injured in the explosions that rocked Beirut yesterday.

About 2,750 tonnes of the agricultural fertiliser ammonium nitrate, which was being stored for years in a portside warehouse, blew up – registering the equivalent of a 3.3-magnitude earthquake.

Rescue workers are searching for both survivors and victims as many people remain missing.

It is expected to cost upwards of $3 billion (about €2.5 billion) to repair the widespread damage to homes and businesses in the city.

Hospitals that were already struggling to cope with the Covid-19 pandemic are completely overwhelmed and are turning away patients, according to local reports.

Prior to the devastating blasts, Lebanon was already dealing with its worst economic recession in decades, a situation exacerbated by the pandemic and growing social unrest.

Nearly half of Lebanon’s population now live below the poverty line, and the situation is worse among refugees in the country.

About 300,000 people have been made homeless as a result of the explosions and the damage to the city will likely cost from $3 billion (€2.5 billion) to $5 billion (€4.2 billion) to repair, Governor Marwan Abboud said.

Engineers and technical teams have yet to conduct an official assessment to determine the extent of the damage.

TheJournal.ie visited Lebanon in March and found a country that was struggling – resources were stretched to the limit in many areas and unemployment was rising.

As we previously reported, some children are forced to drop out of school in order to work to help support their family – especially among the country’s large refugee population.

The coronavirus pandemic has made jobs even scarcer and health services harder to access for many people.

In late 2019, civil protests erupted in Lebanon. The demonstrations were initially triggered by planned taxes on gas, tobacco and WhatsApp but morphed into a nationwide display of anger over the state of the economy, sectarianism and widespread corruption.

The value of the Lebanese Pound has collapsed in recent months and many banks no longer allow customers to withdraw US dollars. The price of some basic household goods have tripled in price. 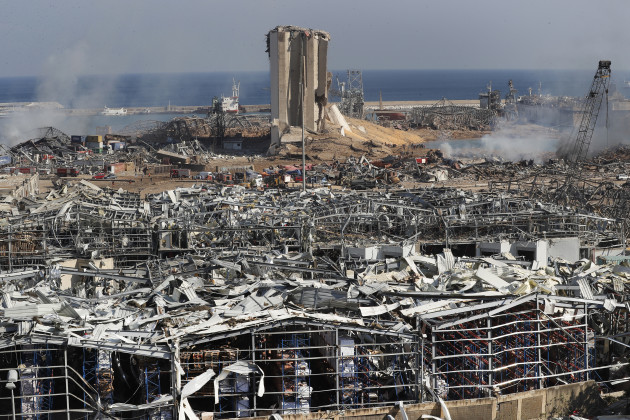 The scale of the devastation in Beirut is immense. Source: Hussein Malla/AP/Press Association Images

The International Monetary Fund has projected a GDP shrinkage of 12% for 2020, the worst in the country for 30 years. Many businesses that were already at breaking point were shut by the Covid-19 pandemic and may never reopen.

Lebanon, which has a total population of 6.8 million people, has the highest concentration per capita of refugees in the world – over one million people who fled neighbouring war-torn Syria have settled there.

‘No food, not even bread’

Many NGOs have warned that an already dire situation will worsen as the explosions will likely cause disruption to food imports.

Collins said people in the city are waking up to complete devastation. “There are scarcely any homes that are not damaged, with many destroyed, businesses and livelihoods were wiped out in seconds.”

Collins said the coronavirus pandemic has already caused a steep drop in living standards, noting that about 75% of Lebanese people work in the informal sector, a figure that is higher among Syrian refugees.

In recent months, families reported having “no food, not even bread in their homes”.

“Now, the food crisis will deepen further,” Collins said. “The grain stores in the port are completely destroyed. The port is the entry way for Lebanon’s grain imports; they import 90% of their grain for the staple Lebanese bread.

“This explosion has made a very dire situation worse – with a growing number of Lebanese vulnerable to destitution – and could not have come at a worse time for the besieged country.” 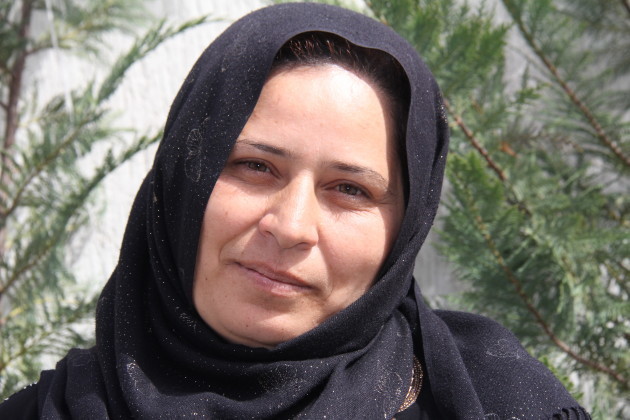 TheJournal.ie recently explored the reality of life for refugees living in Lebanon, with one Syrian woman telling us her family often has to go without food.

“My main concern is getting food. The good thing now is that the weather is getting better and winter is over. It was so difficult during winter – we would burn anything just to get warm, plastic, anything we could find,” Nadia told us.

“When my children see a piece of potato, for them as if it’s a feast. We eat whatever we find on the ground. Sometimes we pick up leaves and cook them, whether it’s tasteless or not, it’s just something to feed the kids.”

Yukie Mokuo, a Unicef representative in Lebanon, is concerned that children are among the victims of the explosions and said “those who survived are traumatised and under shock”.

“Yesterday’s catastrophe in Beirut adds to what has already been a terrible crisis for the people of Lebanon compounded by an economic collapse and a surge in Covid-19 cases.

“The pandemic already meant that hospitals are overwhelmed, and front-line workers are exhausted,” Mokuo said.

Unicef is supporting the Ministry of Public Health to remove what is left of medicines and vaccines that were stored in a warehouse at the port.

What has led Lebanon to this point?

On Friday, a verdict is expected in a trial related to the 2005 assassination of former Lebanese Prime Minister Rafic Hariri, who was killed in a huge truck bomb attack.

Four alleged members of the Shiite Muslim fundamentalist group Hezbollah are on trial in absentia at the court in the Netherlands over the huge Beirut suicide bombing that killed Sunni billionaire Hariri and 21 other people.

A woman in the city centre yesterday told a reporter: “It felt like an earthquake … I felt it was bigger than the explosion in the assassination of Rafic Hariri in 2005.”

Events that have unfolded in the 15 years since the assassination shed some light on how Lebanon ended up in its current state.

A massive suicide bomb tears through Hariri’s armoured convoy on the Beirut seafront on 14 February 2005, killing him and 21 other people.

Amid a groundswell of protests, Syrian troops leave Lebanon on 26 April after a 29-year deployment which had peaked at 40,000 troops.

A United Nations tribunal trying the four suspects accused of the assassination is set to deliver its verdict on Friday. Hezbollah chief Hassan Nasrallah has refused to hand over the defendants.

Israeli troops withdraw from southern Lebanon in October and the Lebanese army, aided by a UN force, deploys into the border region after a 40-year absence.

In May 2008, a week of clashes between Hezbollah-led militants and government supporters in Beirut and other regions leaves nearly 100 people dead.

After talks to avoid renewed civil war, Lebanon in July 2008 forms a 30-member national unity government in which Hezbollah and its allies have a veto.

After months of stalemate with the Hezbollah-led camp, he is only able to form a government in November.

In January 2011, Hezbollah forces the collapse of the unity government. In June, a new Hezbollah-dominated government is formed.

In April 2013, Hezbollah confirms its fighters have deployed to Syria to fight in the country’s conflict on the side of President Bashar al-Assad.

In the following years it sends thousands of its militants across the border, with military and financial aid from regional Shiite heavyweight Iran.

In May 2018, Hezbollah and its allies dominate the first legislative elections since 2009. 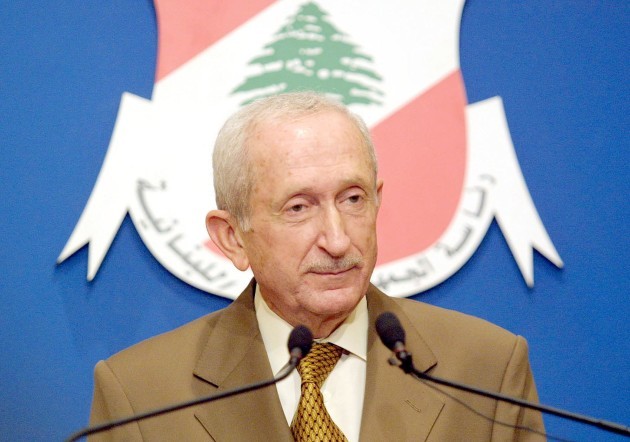 Hariri’s Future Movement loses a third of its seats but he is designated premier for a third term. Negotiations to form a new government drag on until late January 2019, with Hariri blaming Hezbollah.

In September 2019, hundreds of people protest in Beirut over the deteriorating economy and increasingly difficult living conditions, largely caused by the fall of the Lebanese Pound.

On 29 October, Hariri announces he is submitting the resignation of his government.

On 21 January 2020, a new government is unveiled, made up of a single political camp, the pro-Iranian Hezbollah and its allies, who have a parliamentary majority.

On 30 April, Lebanon, having defaulted on its sovereign debt for the first time in its history, adopts a plan to rescue the economy and vows reforms.

But talks with the International Monetary Fund launched in mid-May aimed at securing crucial aid stall.

On 3 August, Lebanon’s foreign minister resigns in protest at the government’s mishandling of the crisis.

On 4 August, yesterday, Beirut is devastated by two explosions at the city’s port.

Roma can be awarded a technical defeat in the match with Verona. The club incorrectly stated diavara
Zinchenko and Bernardo Silva will not play against Wolves due to muscle injuries
Racism doesn't stand a chance. Milan against discrimination
Puig does not want to leave Barca and will fight for a place in the squad. Koeman advised him to go on loan
PSG can sign Khedira from Juventus
Ruediger may leave Chelsea. He wants to play regularly before the Euro
Tiago Silva: I am motivated by the chance to play at the 2022 world Cup. I will be about 38, I want to be fit
Source https://www.thejournal.ie/beirut-explosion-lebanon-economy-5168191-Aug2020/

TD pleads with Donegal public to double efforts on Covid

Irish myths and legends - the giant and the baby

Judge shoots down plans for alleged killer to holiday in Donegal

Man seriously injured after being stabbed during burglary in Waterford