Live: President Higgins and Micheál Martin among attendees at Mass in Derry

about 2 hours ago Updated: 23 minutes ago

Though restricted through Covid-19 the people of Derry pay tribute to John Hume through candles and condolences. Video: Enda O'Dowd

The funeral Mass for the Nobel Laureate and former SDLP leader John Hume is under way in Derry.

Tributes from the Pope and the Dalai Lama are among those which will be read at the funeral, as well as a reflection from Mr Hume’s son, John jnr.

Due to the coronavirus restrictions only about 120 people can be present inside St Eugene’s Cathedral in Derry for Requiem Mass. The cathedral grounds have been closed to the public, but local people have been gathering along the railings since about 10am to pay their final respects. 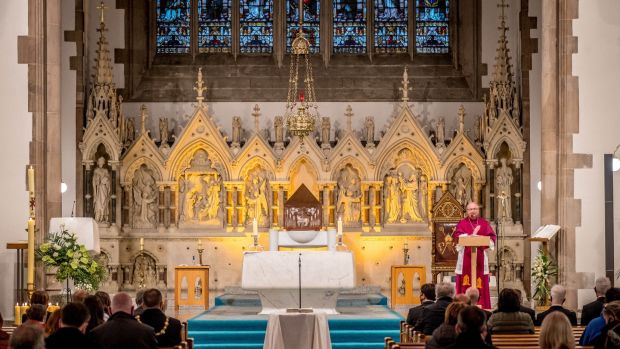 Inside the cathedral a portrait of Mr Hume has been placed at the side of altar, with candles in front of it.

Among those present are the President Michael D Higgins, the Taoiseach Micheál Martin, Minister for Foreign Affairs Simon Coveney, the North’s First and Deputy First Ministers, Arlene Foster and Michelle O’Neill, and the North’s Secretary of State, Brandon Lewis.

Also in attendance were friends and colleagues from throughout Mr Hume’s life, including civil rights leader and co-founder of the SDLP Austin Currie, Derry civil rights leader Micheal Canavan, and songwriter Phil Coulter, as well as staff from the Derry care home where Mr Hume spent his final years. 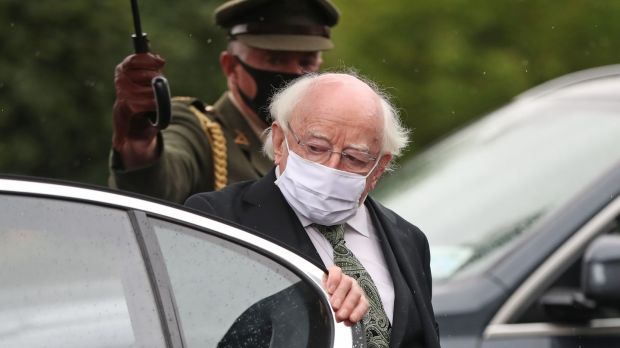 Pope Francis said he had been “saddened” to learn of Mr Hume’s death, and sent his prayers and blessings.

He paid tribute to Mr Hume’s achievements as a peacemaker, saying he was “mindful of the Christian faith that inspired John Hume’s untiring efforts to promote dialogue, reconciliation and peace among the people of Northern Ireland.”

The Dalai Lama praised his “deep conviction in the power of dialogue and negotiations in resolving problems in his homeland”, which he said had been an “example of non-violent resolution of issues.”

Mr Hume’s “steady persistence” message of “peace and nonviolence in the resolution of conflict, no matter how protracted or difficult it may seem to be, will long survive him,” he said. “He has lived a truly meaningful life.” 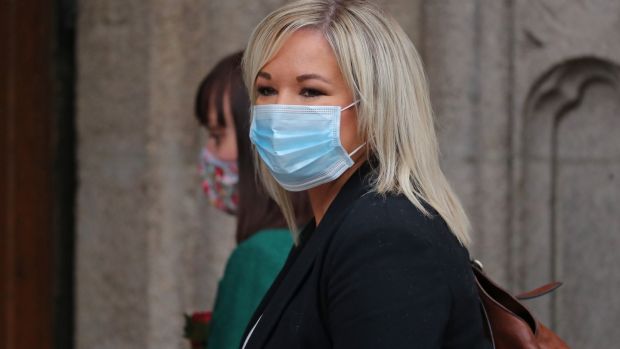 Tributes were also read by the Bishop of Derry, Dr Donal McKeown, from the former US president Bill Clinton, and the UK prime minister Boris Johnson.

Mr Clinton said he and his wife Hillary had been “deeply saddened” by the passing of their friend, Mr Hume, “who fought his long war for peace in Northern Ireland, his chosen weapons an unshakeable commitment to non-violence, persistence, kindness and love.

“He was Ireland’s Martin Luther King,” he said.

Mr Johnson said that “last night a candle was lit and placed in the door of Downing Street, to pay respects to John Hume”.

He said: “The world has lost a giant of a politician, who was recognised the world over for the immense contribution he made to Northern Ireland.

“We should never forget the lasting impact he made and will continue to have on Northern Ireland. His unending determination and courage paved the way for peace and because of all he did then Northern Ireland is a safer stronger and better place. This will be his legacy,” he said.

A tribute was also sent by Bono, who described him as “a man whose life made all our lives bigger.”

“We were looking for a great leader and found a great servant,” he said.

Arriving at the cathedral, the North’s First Minister, the DUP leader Arlene Foster, said she was pleased to have been able to come and pay her respects as an individual and on behalf of the people of Northern Ireland.

“It’s a very sad day but it’s also a very proud day for the city and for the family and the many many friends of John Hume, ” she said.

If you are reading this on The Irish Times app, please click here to see the livestream of John Hume’s funeral Mass on our mobile site

Liverpool will buy Jota for 41 million pounds. Wolverhampton will pay up to 13.5 million for Hoover
8 is Bavaria's favorite number. Now she beat Schalke: Gnabry scored a hat-trick, Sane scored 1+2, Lewandowski came up with an assist by rabona
Liverpool agreed a 5-year contract with Jota. The transfer amount could be 43 million euros
I left everything and went to the other side of the world for my favorite team. The heartwarming story of a Norwegian fan in love with Santos
Lewandowski scored in the 1st round of the Bundesliga in 7 seasons and repeated the championship record
Gnabry scored a hat-trick against Schalke
Lewandowski scored for Schalke in their 10th Bundesliga game in a row. This is a League record
Source https://www.irishtimes.com/news/ireland/irish-news/funeral-of-john-hume-hears-peacemaker-held-deep-conviction-in-the-power-of-dialogue-1.4322506

Walkers concerned over plans to limit access to Luggala estate

'This is getting serious again': New restrictions now in effect as Dublin moves to Level 3

'The Infodemic': Ireland's weak far-right hopes to gain from online conspiracies and misinformation

Covid-19 is spreading most in deprived areas, the figures suggest

200 'irreplaceable' books worth €2.7m that were stolen in London have been found under a house in Romania

Council says Dublin pubs, cafes and restaurants will be permitted to serve outside if they meet certain conditions

Movies to help take your mind off the madness this week

Man (50s) dies after getting into difficulty swimming in Youghal

‘It will be hard for people . . . they’ll miss it’: Dublin’s religious once again close their doors

Covid-19: Garda presence in Dublin to be significantly increased

Quiz: How much do you know about Dublin?

Work under way to get more sports fans into stadiums, Oireachtas committee told

Rest of country can ‘transit’ through Dublin for overseas travel

'All of the efforts are to reduce congregation': CMO outlines urgency of fresh Dublin restrictions

'I thought it was Avril Lavigne at first': Varadkar laughs off incident where woman threw smoothie on him

Pat Smullen was as a ‘fighter’ who always did his best, funeral service told

Covid-19 Level 3 (plus): Here are the changes that come into force for Dubliners at midnight

Calls for Van Morrison to be stripped of city honour

Up to 50 people can attend weddings in Dublin this weekend, but down to 25 people from Monday

How does moving into Level 3 affect sport in Dublin?

Covid cases in Donegal traced back to house parties

Coronavirus: Three further deaths and 253 new cases - including 116 in Dublin

Debunked: No, the Covid-19 swab test cannot enter the brain and cause damage

UCD moves to Level 4 restrictions, cancels all on-campus activity for the coming week