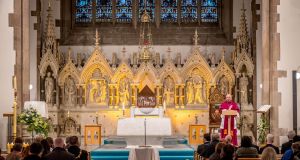 His remains were brought from his home near Moville, Co Donegal, to St Eugene’s Cathedral in Derry City last night ahead the funeral Mass, which will take place at 11.30am.

Hundreds of people lined the route of the cortege in Donegal and Derry to pay their respects, despite a request from the Hume family to stay at home due to the coronavirus pandemic, and many more lit candles for peace in his memory.

Mr Hume’s death was announced on Monday after a long illness. He was 83, and had been suffering from dementia.

He has been hailed around the world as a peacemaker who was one of the architects of the North’s peace process and the 1998 Belfast Agreement.

He was awarded the Nobel Peace Prize along with the Ulster Unionist leader David Trimble for his role in ending the violence of the Troubles.

It is understood a John and Pat Hume Foundation is to be set up in Mr Hume’s memory to take forward his work.

The current SDLP leader and Foyle MP Colum Eastwood said that under normal circumstances Mr Hume’s funeral would have been “one of the largest ever seen in Ireland”.

Mr Eastwood said there was a “real sadness” in Mr Hume’s home city of Derry ahead of the funeral on Wednesday morning, but also pride. “People are full of pride for everything he achieved for us,” he said.

“As far back as 1964, in The Irish Times, John was outlining the pathway that led ultimately to the Good Friday [Belfast] Agreement and ended the Anglo-Irish conflict after 800 years.

“Amid all the talk of legacy, the most important thing is that it doesn’t stop. We have a lot of work to do to bring people together on this island, and we have to finish the job.”

Jose Mourinho: what happened to Dyer is not normal, he was dehydrated. If the League management doesn't care about the players, I don't
Jose went berserk twice during the match with Chelsea: ran over Lampard and ran to look for Dyer - he rushed to the toilet right during the game
Lampard on relegation from the League Cup: we Need to keep a positive attitude. Everything will come if Chelsea score second, leading the score
Call of nature, what can you do? Dyer explained why he ran to the dressing room during the match with Chelsea
Mourinho and Lampard shook hands before the penalty shootout. In the first half, they had a fight
Dest arrived in Spain to complete a transfer to Barca
Lionel Messi: I Am responsible for my mistakes. I wanted Barcelona to become stronger
Source https://www.irishtimes.com/news/ireland/irish-news/funeral-of-john-hume-to-take-place-in-derry-today-1.4322506

Bus Éireann to suspend Dublin to Belfast service in November

Gardaí have used Tasers 125 times in past five years

FactFind: Are Fine Gael's claims about Sinn Féin in a video published on social media accurate?

Gorman among Letterkenny Rovers trio to sign for Institute

Quiz: How well do you know these moments from televised political debates?

Your evening longread: What it's like to be a high-wire artist

Confirmed: SA Rugby votes its big four into expanded Pro16 as Cheetahs get the boot

College student: 'There's been no dancing on tables or shots at the bar'

Staying up for the US debate? Follow our liveblog for all the latest action and analysis

Murder accused insisted he had not travelled to north Dublin on morning body found, court told

'I got a call from Focus Ireland inviting me to view an apartment ... it felt like heaven'

The Remote: Gleeson plays Trump, Dublin does rave, and Bake-Off does biscuit week

Coronavirus: One death and 363 new cases confirmed in Ireland, with 154 in Dublin

WATCH: The first presidential debate between Trump and Biden tonight

Budget 2021: Government's spending plans based on assumption of no widely available Covid-19 vaccine and no UK-EU trade deal

Stephen Kennys says Coleman and Doherty can both start for Ireland

'I cannot even begin to put into words what he was like when he lost his temper, it was ludicrous'

Home of The O’Rahilly should not have been demolished, Taoiseach says