Gardaí investigating after assault on woman on Dublin Bus

No arrests made following assault in Coolock on Thursday night 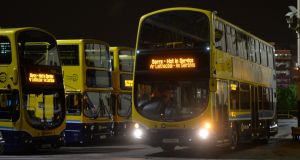 Gardaí are investigating after a woman was assaulted by a number of people on a Dublin Bus on Thursday.

It is understood the woman was punched in the head and the back.

A Garda spokesman said they were responding to a public order incident which took place on a Dublin Bus on Priorwood Road in Coolock on Thursday at around 9.45pm.

“No arrests have been made to date and gardaí at Coolock are appealing for witnesses,” he said.

Garda investigations into the incident are ongoing.

Dublin Bus said in statement that the bus driver had followed official procedures during the incident. It noted that all employees were “fully trained on the comprehensive procedures for dealing with incidents such as this”.

Fianna Fáil councillor Racheal Batten told RTÉ’s Nine O’Clock News that increased security and police presence was needed on buses in the Coolock area. “There have been a number of these incidents across Dublin city in the recent past. Areas like ourselves here really need more support from Garda resources.”

Dublin Bus has handed over CCTV footage of the incident to gardaí.

Ole Gunnar Solskjaer: the Movement of Cavani is impressive, everyone should learn. This is the striker Manchester United were looking for
Lazio wants to rent Rugani from Juventus. Defender plays for Rennes since October
Barcelona wants to give Umtiti on loan
Bernardo Silva: Man City have been playing well lately. We are good in all the lines
Real Madrid players were surprised by Zidane's soft speech at the first training session after the relegation from the Cup
Leicester have joined the fight for Eriksen
Real Madrid can invite Gallardo from River Plate instead of Zidane (ESPN Argentina)
Source https://www.irishtimes.com/news/crime-and-law/garda%C3%AD-investigating-after-assault-on-woman-on-dublin-bus-1.4421779

Life on a Covid ward: 'We were the last people some patients saw, but many died on their own'

Another 51 deaths with 135 new Covid cases in Donegal

The Explainer: What are the issues with the mother and baby home report?

Covid-19: 21 more deaths reported in North as lockdown is extended until March 5th

Liam Neeson's "The Marksman" is a box office champ

Breaking: Title up for grabs as Jason Quigley set for notable ring return

At least 15 days before trapped mine workers in China will be reached, authorities say

Parents of children with special needs: How are you coping? Have your say

Donegal routes to be gritted from 5pm this evening

Works to replace water mains in Spiddal to commence this month

Vaccines: HSE says 121,900 vaccine doses have been administered so far in Ireland

Farmer shot dead by soldier in Northern Ireland in 1974 has been exonerated, family says

Shooting of farmer by British army in 1974 ‘unjustified’, coroner rules

Man jailed for 10½ years for coercively controlling and attacking woman

There could be up to 1,000 Covid-19 deaths in January, Holohan told Government

'A real concern': A third of patients with Covid-19 in hospital contracted the virus while on wards, says Tánaiste

Woman in hospital after being attacked with knife in Dublin

Decision on major Limerick planning strategy due in April

Covid-19: Tony Holohan predicts as many as 1,000 deaths in January

Holohan warns of up to 1,000 Covid-19 deaths in January, calls for tighter air travel rules

Poll: Should a 'national voluntary collection' be set up for survivors of mother and baby homes?

Every resident in Ireland will be offered the vaccine before September, says health minister