THE SETTING MIGHT have been Derry, but at times it felt like the world was saying goodbye to John Hume today.

The funeral of Nobel Peace Prize-winner Hume took place in St Eugene’s Cathedral this morning. But with people urged to stay at home because of the Covid-19 pandemic it was a doubly painful occasion for the city – and even the procession of presidents, politicians and priests felt inadequate.

Indeed the presence of President Michael D Higgins, Taoiseach Micheál Martin and First Minister Arlene Foster was a reminder of who couldn’t be there. Alongside Hume’s own son Aidan, currently in Massachusetts, the missing mourners were a testament of Hume’s global stature.

President Bill Clinton, multiple UK prime ministers and a string of world leaders might have otherwise made their way to Derry on a rainy Wednesday morning if it hadn’t been for the Covid-19 pandemic.

Instead, they sent messages. Words of praise, of grief, of support.

The Clintons called him Ireland’s Martin Luther King, while Boris Johnson said that “the world has lost a giant politician, who was recognised the world over”.

Both Pope Francis and the Dalai Lama sent their condolences.

But the real emptiness was in the streets of the city. Derry, packed and peopled for so many celebrations in recent years, would have been mobbed with friends, admirers and fellow citizens if it hadn’t been for the virus.

They were the people who wanted to thank him for setting up the Derry Credit Union, for fighting for civil rights and, ultimately, for negotiating a peace that still holds in Northern Ireland today.

The sad irony of social distancing wasn’t lost on mourners today. As Father Paul Farren told the congregation in his homily: “John never kept a distance. He stopped. He showed compassion. He got involved. He gave dignity and he gave life to so many people.”

“Make no mistake about it – there are people alive today who would not be alive had it not been for John’s vision and his work. ”

Even in the darkest moments, when people would have been forgiven for having no hope, John made peace visible for others. His vision revealed what could be and with time and determination and single-mindedness and stubbornness he convinced others that peace could be a reality.

Yet even before the funeral mass was over, nearly 200 people had gathered outside the church for a last chance to thank John Hume for his work in Derry and in Northern Ireland.

By the end, hundreds more had joined them for a final round of applause. 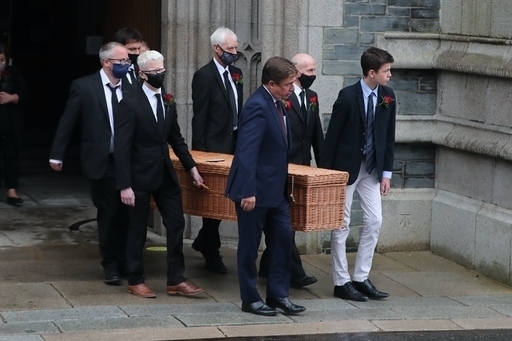 ‘An ambassador for Derry’

Born in Rosemount and brought up in the Glen area of the city, Hume was a proud Derry native – and Derry was proud of him. An ambassador for the city, the place remained if not his entire world, then at least his most important touchstone.

St Eugene’s Cathedral, only yards from where Hume was born, was the same place where the city said goodbye to another landmark figure Bishop Edward Daly in 2016. From the edge of the cathedral, open since 1873, you can just about see the city’s famous Peace Bridge – an apt symbol of all Hume achieved in his lifetime.

But the entire celebration was full of symbols. From the red roses worn on the lapels of SDLP MLAs to the leaders of Sinn Féin and the DUP sitting in the same pew, the funeral was a reminder of how far Northern Ireland has come.

Finally, the wicker coffin Hume is to be buried in spoke volumes about the style of the man.

Northern Ireland, over the decades, was forced to get used to funerals. Ordinary families mourned in graveyards on a weekly basis, while IRA funerals loomed large on the nightly news. In more recent years, the death of a generation of leaders, from the SDLP’s Seamus Mallon to Sinn Féin’s Martin McGuinness, has been a recurring reminder of how Northern Ireland has been transformed by peace – but also of how much work is left to do.

“It’s an end of an era”, Michelle O’Neill told reporters. “The era of Martin McGuinness, John Hume, Ian Paisley – all from different political perspectives. Certainly, as we have lost big giants like that, there’s a huge onus on all of us as the post-Good Friday Agreement generation of political leaders to be able to carry on the good work they all started.”

“That’s the challenge to us today,” she said.

But if today was a global event, it was also one of private grief for John’s family and his wife Pat. “When the history of Ireland is written, if Pat Hume’s name is not beside John’s it will be an incomplete history,” Farren said today.

“Marrying Pat was Dad’s greatest achievement,” Hume’s son John said at the start of the service. He sketched a portrait of a father who was often busy and distracted but always there for his family.

“We all felt he was absent. But he wasn’t. He was just with us somewhere else,” he said, recalling a man fond of chocolates, wine and cigarettes. 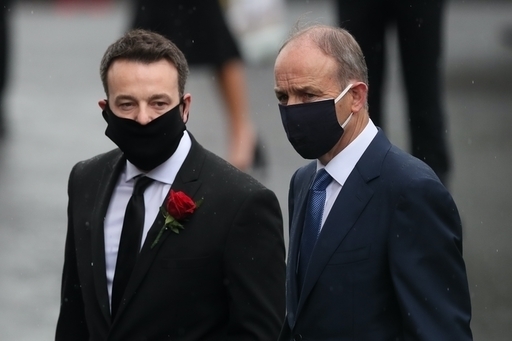 Yet John also referenced the humanity of the man who, if alive today, would have supported a living wage and a decent home for all.

“More than ever, he would be urging we move beyond our flag-based identities,” John told the congregation.

Indeed, the various shades of Hume were celebrated today. The activist and the operator, the negotiator and the raconteur, the family man and the global statesman – a man of qualities and contradictions who emerged both too early and just in time for Northern Ireland.

The family thanked John Hume for imparting to his children a “moral compass”. The same, of course, could be said by people the length and breadth of the island.

At the end of the day, as the final bars of A Town I Loved So Well echoed outside the church, the most powerful words were the most simple – shouted from the crowd outside the cathedral’s gates: “Thank you John.”

Atletico are in talks with Arsenal to buy out Torreira
Kulusevski scored with the sixth touch and the first shot for Juve-this is crucial in the debut victory of coach Pirlo
Real Madrid was the first in La Liga to release 4 players born in the 2000s
Messi says goodbye to Vidal: I always thought you were a phenomenon. Our paths will cross again
Zidane about 0:0 with Sociedad: Real Madrid lost two points. Overall, we played well
Real Madrid have lost points in 1 La Liga game in 5 of the last 8 seasons as Champions
Andrea Pirlo: I don't want to just copy someone's ideas, I have my own
Source https://www.thejournal.ie/derry-john-hume-peace-derry-funeral-taoiseach-5167748-Aug2020/