Ireland 'really happy' with Carbery's progress as Sexton sits out

JOHNNY SEXTON’S thumb injury has caused the Leinster captain frustration in recent weeks, but his inability to take part in team training sessions has opened the door for Joe Schmidt’s other out-halves to impress.

Although the Ireland head coach last week downplayed the severity of Sexton’s injury, the 34-year-old was again f0rced to train away from the main group during Friday’s open training session at Thomond Park. 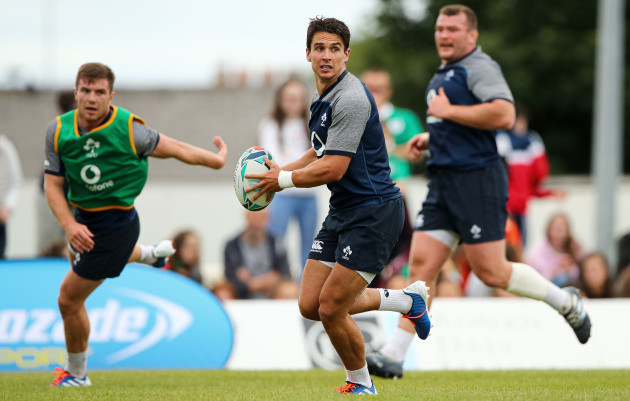 Sexton, as he did in Galway a week ago, was limited to a running session under the supervision of one of Ireland’s medical team in Limerick, again allowing Joey Carbery, Jack Carty and Ross Byrne to step in at out-half during the team runs.

With the squad now on a down week after two intensive camps, Sexton will have the opportunity to continue his rehab in the hope of being fully fit to train when Ireland reconvene in Abbotstown on Monday week.

But the training-ground injury has presented his understudies with a chance to stake their claim as the trio of Carbery, Carty and Byrne battle it out to be named in Schmidt’s 31-man World Cup squad.

Carbery, who enjoyed an excellent first season at Munster, appears to have fully shaken off the hamstring injury that forced him to miss large chunks of the second half of the campaign.

“So, he like the others, is competing really well. He’s a fabulous player who can play in more than one position. We’re really happy with his progress and the development he’s working on. You can see in his skills, his kicking with Richie Murphy, the work he’s doing outside of just the rugby stuff is excellent.

“We’re really happy with him along with the other guys who are again, pushing for a position that is really competitive with Jack, Ross and Joey fighting with Johnny for that number 10 spot.”

While Schmidt has said Sexton will be back to full fitness in time for Ireland’s opening warm-up game against Italy on 10 August, that Aviva Stadium outing will provide the head coach with the perfect window to take a closer look at his other options in the pivot position. 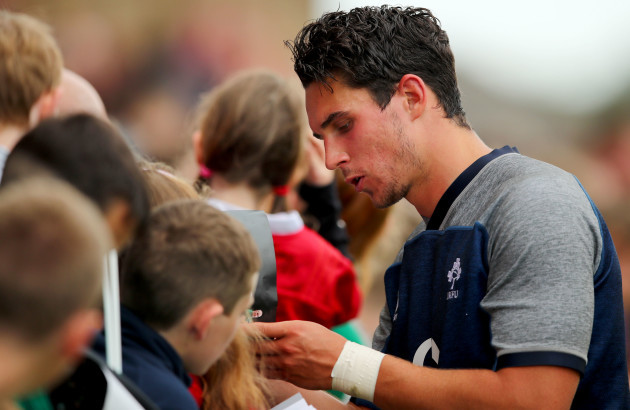 Carbery impressed off the bench against Scotland during the Six Nations before that hamstring injury forced him to miss the rest of the championship, while Carty is coming off a brilliant year with Connacht and impressed during his three cameo appearances in green.

Carty was preferred to Leinster’s Byrne for the Six Nations but the latter rebounded strongly from that disappointment to help Leo Cullen’s side to Pro14 glory last term, including a standout performance against Munster in the semi-final win.

Ireland’s focus will now turn to rugby-based sessions after getting through an intense first block of fitness and power work during camps in Carton House, Galway and Limerick.

After the visit of Conor O’Shea’s Italy, the players will be given another week off before travelling to Portugal for a warm-weather training camp in preparation for the clash against England at Twickenham.

Home and away games against Wales conclude the warm-up programme, before Schmidt names his final panel in early September, as Ireland look to peak at the right time.

“The preparation and the thought and the detail that’s gone into the planning of this period by the conditioning and medical staff and Joe and the rest of the coaches has been excellent,” Easterby added.

“Only time will tell [if they've planned it right] and I think you’ve got to plot a course. And yes there are times when you need to possibly adjust sessions, or adjust things, but on the whole, we feel pretty happy with the work the players are doing.

“Things will shift slightly when we get back into camp in a couple of weeks because we are obviously focusing more on a game with Italy coming up.

“I think this period has been excellent, I think it has been really well planned, it has been well received by the players, they have worked incredibly hard.

“They have kept the medical and conditioning staff on their toes and to a man they have bought into everything they have been doing. Not just in the gym and on the pitch, but the rugby detail as well. We have drip-fed that in over the period as well. There is plenty of balance in what we’ve done and hopefully, that will pay off come September.”

This is the best Milan in years: superkambekom with Juve (3 goals in 5 minutes!) saved the intrigue in Serie A
Zlatan Ibrahimovic: I am the President, player and coach! If I had been in Milan since the start of the season, we would have taken the scudetto
Sarri on the defeat by Milan: we played first-class football for 60 minutes. Then-turbidity
Pioli on the victory over Juve: Milan became a team. We can play even better
Pioli beat Juventus for the first time as a coach
Vardy has scored 10 goals for Arsenal in Premier League matches. Only Rooney has more
Ronaldo scores or gives an assist in 17 consecutive Serie A matches, where he scored 25 (21+4) points
Source https://www.the42.ie/joey-carbery-ireland-world-cup-squad-4732029-Jul2019/

Disadvantaged students much more likely to have disengaged from school work

Man who accosted stranger on Dublin street jailed for a year

Quiz: How well do you know your European cities?

Passenger who promised driver a ‘few quid’ after crash awarded €10,000

Your evening longread: Inside the lives of internet middlemen

McElhinneys Summer Sale – A sale like never seen before

POLL: Who do you think Joe Biden should select as his running mate?

Probation act applied for man who spat on Garda after arrest

Explainer: Traveling between the US and Ireland during coronavirus

BREAKING: No new confirmed Covid-19 cases in Limerick as one person dies from disease nationally

A thrilling spy series, a Disney favourite, and a laugh-out-loud comedy - it's your weekly TV guide

1 death due toCovid-19 and 24 new cases of virus identified.

Coronavirus: One further death and 24 new cases confirmed in Ireland

Coronavirus: One more death and 24 new cases reported in the Republic

New RNLI lifeboat based at Clifden will carry the names of 10,000 people in fundraising effort

Coronavirus has caused decline in people with dementia, carers say

€1 million in funding announced for six historic towns around Ireland

This is the Labour Party's new front bench

'We have no other alternative': Mater Private Hospital defends charging €275 for Covid tests

Yes, there is a case of bubonic plague in China. No, it's not something to worry about.

The European Commission has slashed Irish and eurozone growth forecasts

Limerick council to waive fees for street furniture outside businesses

City traffic up to 70 percent of normal levels

Johnny Depp's lawyers tell UK court that his libel case against The Sun is about 'vindication, not money'

Donald Trump hits out at "far-left fascism" and "angry mobs"

Tens of thousands of immigration renewals can now be done online