about an hour ago Updated: 7 minutes ago 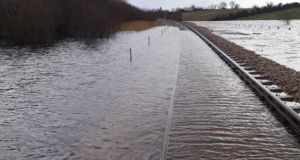 The Sligo railway line between Dromod and Carrick on Shannon pictured on Tuesday. Photograph: Iarnród Éireann

Train services between Dublin and Sligo could be suspended unless flood waters in Co Leitrim decline, Iarnród Éireann has warned.

Irish Rail has already spent significant amounts of money on raising the railway on low-lying stretches of the route between Drumod and Carrick on Shannon.

The area, which is south of the confluence of the Boyle and Shannon rivers, was severely flooded in 2009, flooded again in 2016 and again this month.

The Dublin to Sligo line is also vulnerable to rising flood waters as it passes a corner of Lough Owel in Co Westmeath.

The western rail corridor from Ennis to Galway is already partially closed.

A spokesman for Irish Rail said the railway sleepers about 4km south of Carrick on Shannon were already under water, as illustrated by a photograph taken by the company on Tuesday.

Trains were continuing to operate on Wednesday but with speeds down as low as 5km/h in parts.

Spokesman Barry Kenny said the reduced speed was resulting in delays of 15 to 20 minutes per journey.

“We are monitoring continuously. This is a section we have raised by half a metre over recent years to reduce flood risk” he said.

In flood-hit Clonlara, Co Clare, a number of families have called on the Government to buy them out of their swamped homes.

Springfield, which lies between Limerick city and the ESB-operated Parteen Weir, has been devastated by flooding six times in the past 25 years.

A plan to construct a flood defence and pumping station to divert water away from the area is due to be brought forward by Clare County Council in the next three weeks. A previous version of the plan had been withdrawn.

Limerick couple Mike and Liz Hogan and their four children were evacuated to a hotel last Friday after the River Shannon engulfed access roads to their Springfield home.

“We’d go in the morning if we got a buy out. The floods are getting worse every time. We have to get out of here,” said Mr Hogan.

The family is staying in the Castleoaks Hotel in Castleconnell while their home is cut off by floodwater.

“I went as far as I could yesterday to try and get to the house but the water level was up to my waist and I couldn’t get down. The current was actually pushing against me, it was too dangerous, so I turned back,” said Mr Hogan.

In 2015/2016 their home was “destroyed” when contaminated floodwater overwhelmed their septic tank and Liz’s car was flooded.

Springfield mother-of-three Bridget Kinsella also called the Council to “buy us out”.

“I want out of here. I love the nature and beauty of the area but I can’t stay here when this misery comes to my door every few years.”

Families continued to pump water from around their homes on Wednesday as the ESB announced it was increasing water discharge rates from the Parteen Weir to maintain safety levels in the dam.

Members of the Defence Forces, Limerick Fire Service, and local Civil Defence crews are now in Clonlara, Castleconnell, Mountpelier, and Annacotty, where local residents are fighting a rising tide.

Limerick Green Party TD, Brian Leddin, an engineer, has called “for a review of the operation” of the ESB-operated Ardnacrusha power station and Parteen Weir “in order to determine its role in flood management in the Limerick area”.

An ESB spokesman responded: “ESB cannot hold back water at Parteen Weir in a flood situation as there is no capacity to hold this water. If water is not allowed to pass there is a risk to dam and embankment safety and even greater risk of flooding.”

“Before the discharge is changed at Parteen Weir into the River Shannon, the relevant local authorities are informed and relevant stakeholders, including local residents, are texted.”

In Carrick-on-Shannon water levels have risen by 30mm over the past 24 hours, but Leitrim County Council has said all roads are still passable , although care is needed on some routes.

The council’s emergency management team met on Wednesday morning to assess the situation as water levels on the river Shannon continued to rise.

According to the council no domestic or commercial properties have been flooded but property owners are being urged to remain vigilant.

With more rain expected in the coming days, local people in vulnerable locations around Leitrim village and Carrick-on-Shannon are on high alert.

The council is continuing to pump flood waters in these areas while sandbags are also being provided.

In a statement, Leitrim County Council said appropriate engineering measures were being put in place on Wednesday in both Leitrim village and Carrick-on-Shannon to facilitate pedestrian access .The Carrick-on-Shannon flood action committee is calling for remedial work at the Jamestown weir saying this would help alleviate the situation.

While a €9m flood management plan has been approved for Carrick on Shannon, local business man Sean Murtagh said this was designed to counter the impact of flooding, rather than the causes.

“We believe that if 14 or 15 pinch points on the Shannon were tackled they would not need to spend as much money,” said Mr Murtagh.

Meanwhile, Brokers Ireland has called for the fast tracking of the planned €1 billion flood relief package designed to protect 11,500 properties around the country.

Cathie Shannon, director of general insurance services at the organisation, which represents 1,250 Broker firms, said the plan is not due for completion until 2027.

“Given the increasing frequency of flooding, and bigger floods, particularly along the Shannon, the South and West, policymakers need to bring greater urgency to the issue,” she said.

Met Éireann said there would be further showers in Connacht, some of them wintery, on Wednesday night. Thursday would be mainly dry and bright but some showers were expected in the north of the province.

Friday is set to “ be a dull and wet day, with outbreaks of rain and drizzle extending countrywide during the morning and lasting on and off for much of the day, with occasional heavier bursts in the west and south”, according to Met Éireann.

Rescue operation underway in Limerick after man 'gets stuck' on roof

‘We are all in this together’- Jim Woulfe, Dairygold CEO

Politics of a pandemic: How Covid-19 changes could open doors to a better Ireland

Donegal singer aims to drum up funds for ChefAid Donegal

Orla up for top radio award as she finalises BBC documentary

Coronavirus: Is insufficient testing a big weakness in our attack?

Critical care may not be directly delivered by ICU medics if cases surge, doctor warns

Coronavirus craft: ‘The virus is so beautiful and so sinister’

Rise in temperatures unlikely to kill off coronavirus

Three chances to be given for breaching coronavirus restrictions this weekend

Three chances to be given for breaching coronavirus restrictions

Biden should pick NY Governor Andrew Cuomo as his VP

Quiz: How well do you know your biblical figures?

Impact of coronavirus ‘overwhelming’ in Republic but for public-health controls

Impact of coronavirus ‘overwhelming’ but for public-health controls in Republic

A friend recommends: Cork's Saoirse Noonan on 'Cheer' and 'The Power of Vulnerability'

Your evening longread: The story of Phil Ochs, the folk singer who could've been as big as Bob Dylan

An ode to Bernie Sanders - the people's champion

28 more deaths from Covid-19 in Republic

BREAKING: 13 more confirmed cases of Covid-19 in Limerick as death toll in Ireland rises to 6,574

BREAKING: 13 more confirmed cases of Covid-19 in Limerick as death toll in Ireland rises to 263

'I want teams across the nation to see the senior Irish team and say, 'That's the way we want to play'

Tips for using face masks: Number one, don't dump them on the ground

Covid-19: Four more NI deaths as public told crisis is ‘not a holiday’

Church services in Limerick to broadcast online this Easter