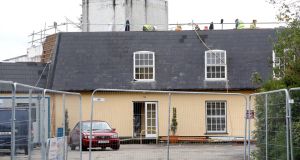 The Department of Justice is in negotiations with the owners of a Connemara hotel to house “less than 250” refugee and asylum seekers there, The Irish Times understands.

The plans to use the long-closed Connemara Gateway hotel near Oughterard, Co Galway, for this purpose led to 700 people attending a meeting in the town on Wednesday evening.

One of the organisers of the meeting, Patrick Curran, has called for one thousand volunteers to take part in “direct action” to prevent the centre from opening.

A leaflet featuring graphs of nationalities in the direct provision system, data on deportations and State spending on asylum, which was not attributed to any group, was distributed among members of the crowd.

The Department of Justice’s Reception and Integration Agency said the State had legal obligations to house and feed people claiming rights to international protection while their claim is being examined.

Posting on the Facebook page Stop Connemara Gateway Hotel Direct Provision Centre, Patrick Curran called for volunteers to offer “up to half a day a week” for protests. So far, more than 170 people have signed up.

In a separate post, Mr Curran wrote that “smear campaigns” had been set up since the Oughterard meeting targeting members of the community as “racists or far-right activists”.

Oughterard is happy to do “more than our fair share to accommodate refugees” and was willing to accept a few families, but “there will be no direct provision centre”, he wrote.

The Facebook group had previously warned, ahead of the meeting, that the town could end up taking in “100 or 200 refugees ... once they settle then they can bring a couple of hundred of their family with them”.

“We are happy to take a family but we would need to vet them to make sure they are genuine,” said the post. “We would like to see that they come from a war-zone and are really fleeing terror ... We would like to know they don’t have a criminal record and their documentation is not fake.”

The group, which has nearly 1,600 members, also featured a number of endorsements for a two-hour-long video posted on YouTube last week that claimed the asylum industry was being forced on rural communities through “State intimidation and manipulation”.

The Department of Justice has said it will start engaging with local communities and politicians about the opening of a number of new direct provision centres once potential properties are evaluated.

The Reception and Integration Agency has sought new premises because demand has risen by 36 per cent so far this year. While 6,056 people reside in 38 direct provision centres, 1,250 people more are temporarily resident in 33 recently opened emergency accommodation centres.

The department spokesman would not confirm the location of any new centres but said an evaluation of offers was under way.

Gian Piero Gasperini: It is useless for Atalanta to look at the scudetto. Inter, Milan and Napoli stand out
Lewandowski's scoring streak of 19 matches for Bayern was Interrupted. He has been scoring since February
Muller was ahead of Rummenigge and with 218 goals came to the 3rd place in the list of the best scorers of Bavaria
Reims coach Garcia may replace Koeman in Barcelona
Tebas about the World Cup every 2 years: Complete madness and a mistake. Violation of the football ecosystem
Two new investigations are being conducted against the President of Angers in the case of sexual violence
If Mbappe has any quality, it is modesty. Pochettino on the words of coach Metz about Kilian

The Climate Crisis: an essential guide

Lack of information about menopause a ‘huge injustice’ to women – campaigner

Opinion: James Bond has many faces - is he a psychopath?

Looking to buy ticket for Ed Sheeran's concert in Limerick? Here's what you need to know

Garda Commissioner says vetting for homelessness staff to be reviewed

Turf now being imported to Ireland from Europe

Option for 100% mica redress remains on the table, says Varadkar

Taoiseach 'concerned' about Christmas delivery delays due to Brexit

Sofa Watch: The Late Late is Not Enough (for Daniel Craig)

Gardai respond to calls for extra resources in Limerick town

Room at Limerick home advertised for rent– but without kitchen access

Man convicted of rape and sexual assault of teenager

‘The goal was to free Don Tidey. And we freed Don Tidey’ – 15 gardaí decorated for bravery

Number of people recorded as homeless increases to 8,212

Number of people recorded as homeless increases to 8,212 as charity calls for ‘urgent action’

GIVEAWAY: Get set for winter with Gym+Coffee's RE: CONNECT Collection

COVID live updates: Ireland to begin booster shots for some next week

Our perfect fried chicken recipes from our Irish chef

August homeless figures show there are 8,212 people in the State without a home

‘Luimneach abú!’ As couple say ‘I do’ with hurling-themed wedding cake

Pandemic, protests and earthquakes: a Grand Final week like never before in Australia

Higgins did not raise concerns over Armagh service with organisers, church says

‘Time for Truth’ rallies to take place tomorrow in Donegal

Jadotville: Injunction sought against report's recommendation to award medal to just one survivor