Foreign Affairs Minister Simon Coveney has called on Boris Johnson to enter dialogue to resolve the issues on the Northern Ireland Protocol rather than taking the unilateral action of bringing in a new law to override the agreement.

Mr Coveney said a way must be found to arrest the rot in relationships and the EU had shown willingness to do that. Speaking to reporters on his way into Cabinet, Mr Coveney said the publication of legislation to alter the protocol would represent a new low in Irish-British relations since the Good Friday Agreement.

The EU's stance on the Northern Ireland Protocol has "hardened" in the face of Britain's threat to unilaterally scrap part of the arrangements, a government minister has warned.

Mr Coveney urged the British government to step back from its plan to publish domestic legislation that would override elements of the post-Brexit protocol governing trade between Britain and Northern Ireland.

Mr Coveney and Taoiseach Micheál Martin are holding talks with Brtish Labour Party leader Keir Starmer in Dublin on Thursday to discuss the ongoing stand-off over arrangements that require regulatory checks and customs declarations on goods moving between Great Britain and Northern Ireland.

Ahead of the meetings, Mr Starmer accused Boris Johnson of taking a "wrecking ball" to British relations with Ireland and the EU. The British government is expected to table its controversial Bill in Westminster next week amid reports of differences within the Cabinet on how far-reaching the legislative proposals should be.

Britain is moving without the consent of the EU to change the terms of the international treaty in a bid to reduce the checks the protocol requires on the movement of goods across the Irish Sea.

The EU has made clear that such a move would represent a breach of international law and could prompt retaliatory action from the bloc. Mr Coveney said publishing the legislation would "cause a lot more problems than it solves" in respect of Anglo-Irish relations and UK-EU relations.

"In many ways in the last number of weeks, the EU position has hardened because I don't think there's a single capital across the EU and anybody in the European Commission that believes, at the moment anyway, that the British government is serious about a negotiated solution because there is no signal coming from London that they are.

Instead, all of the signals are about unilateral action, making demands with no willingness to compromise, and that has hardened the EU response to what they're seeing coming out of London now.

"So, we need to find a way to arrest this rot in relationships and instead to look to compromise, to negotiation, to dialogue, to solve what are genuine issues and concerns."

On a visit to Trinity College in Dublin, Mr Starmer claimed the British prime minister was too distracted by his own leadership travails to focus on the protocol impasse. 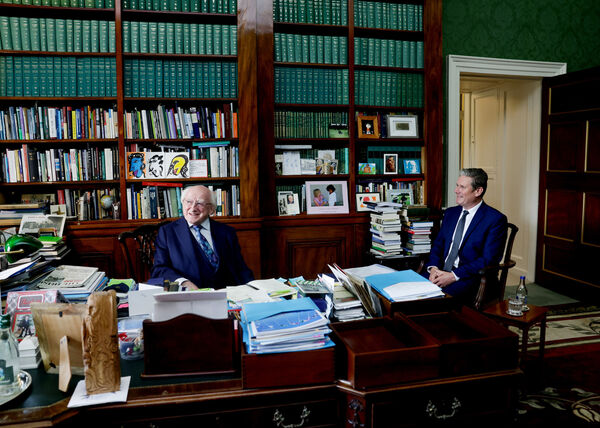 Keir Starmer, who met with President Michael D Higgins earlier, claimed Boris Johnson was too distracted by his own leadership travails to focus on the protocol impasse.

"Of course there are challenges with the protocol, but I think that we have faced much greater challenges than that in our shared history and I think that with flexibility on both sides, with good faith, statecraft, and trust around the negotiating table, we can deal with the remaining issues," he said.

"My concern is that we have a Prime Minister who doesn't have those attributes."

Commenting on Mr Johnson, Mr Starmer said: "He's doing everything he can to save his own skin rather than focusing on the issue here, which is how do we get people around the negotiating table, flexibility on both sides so we can overcome the remaining problems."

Mr Coveney said it appeared that the British government was unsure about what to include in its Bill.

"There were attempts, certainly, we think to harden up some of the language in the proposed legislation this week, which now seems to have been reversed again - we simply don't know," he said.

"We'll have to wait and see. But, of course, our real message is 'please don't go there'."

Mr Coveney said the last thing Ireland and the EU wanted was "tension and unnecessary rancour" in their relationship with Britain at a time when the focus should be on working together on issues such as the Russian invasion of Ukraine.