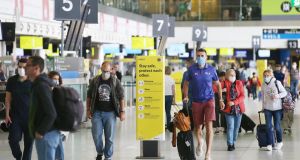 A file image of Dublin Airport. NPHET said 7.8% of cases notified over the last fortnight are associated with travel. Photograph: Collins Photos

The State’s public health team has asked the Government to consider implementing a travel ban on non-essential travel from countries with high rates of Covid-19.

In a letter to Government, the National Public Health Emergency Team said it had previously recommended mandatory quarantine for all passengers travelling to Ireland from overseas.

“While this remains NPHET’s preferred recommendation, if this is deemed unworkable or disproportionate, the NPHET again recommends that consideration is given to the introduction of a travel ban on non-essential travel for those countries with particularly high incidence rates.”

The team said 7.8 per cent of cases notified over the last fortnight are associated with travel. They recommended in their letter that “all measures be utilised to discourage travel from overseas to Ireland at this time.”

The team also warned the Government that “behavioural and message fatigue” is a risk “as the population disengages from Covid-19-related news.”

Minister for Health Stephen Donnelly was also warned about the increased risk of community transmission.

“Ireland is no different to other countries and there remains a continuing and heightened risk that the already evident increase in cases could potentially lead to increasing levels of community transmission in the coming weeks.”

NPHET said that while the vast majority of restaurants and gastropubs had adhered to guidelines, there should be “continued robust inspection and enforcement arrangements and the enhancement of these arrangements where necessary.”

The team said pubs and bars “pose a particular risk to the spread of Covid 19 as alcohol can make people less aware of social distancing and hygiene and respiratory behaviours, loud atmospheres can increase particles emitted and many pubs and bars can be small spaces with poor ventilation.”

A paper was given to the team which detailed international evidence of outbreaks associated with pubs.

NPHET said it had “significant and growing concerns” around the increasing case numbers reported each day and incidence of the disease nationally. The public health team also had concerns about the increasing number of cases in vulnerable groups, workplaces and increased levels of cases in younger people and in particular those aged between 25 to 34 years.

The positivity rate for all tests processed nationally in the last week was 0.7 per cent which had increased over the previous week.

The NPHET said that 47 new cases and four new clusters were notified in the last week in relation to direct provision centres. There were also ten Covid 19 outbreaks involving the Irish traveller community, involving 89 cases

Four outbreaks open in meat processing plants have also been associated with 94 cases.

Some 49 per cent of all cases have occurred from “close contact with a confirmed case”.

Pep Guardiola: city are still far from their best form. We have dropped 10 players
Zidane on Jovic's future: anything can happen. I can't say anything until the window closes
Flick on Bayern's Interest in Kramaric: I know him well, but I haven't heard anything about it
We have three clubs in this group stage of the Champions League. How did campaigns with two end up?
Solskjaer on transfers: No news. Working with what we have, Manchester United have a big squad
Guardiola confirmed that Zinchenko will stay at Manchester City
Bayern won 5 trophies in a year. To repeat the record Barca need to take another
Source https://www.irishtimes.com/news/ireland/irish-news/nphet-calls-for-ban-on-non-essential-travel-from-countries-with-high-covid-19-rates-1.4322542