Parents polled by Government on ‘practical reality’ of reopening creches 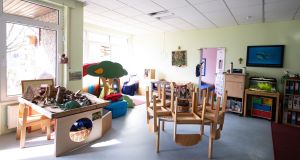 Creches and preschools for all children are to due to reopen from July 20th. Photograph: Lars Baron/Getty

Parents are being asked this weekend whether they intend to send their young children back to creche over the summer as part of a Government-ordered poll on the “practical reality”of reopening childcare facilities.

The Department of Children and Youth Affairs (DCYA) has confirmed it has hired pollsters Ipsos MRBI to survey a sample 500 households with children under 15 around the country.

The results of the survey, which are expected mid-week, will inform the Government’s phased reopening of creches, which is due to begin on June 29th for children of essential workers only.

Creches, childminders and preschools for children of all other workers are to due to reopen on “a gradually increasing phased basis” from July 20th.

The department also issued surveys to creches countrywide on Friday seeking details of their ability to take in children again once the coronavirus lockdown restrictions are further eased.

A key issue is the “possible capacity” of creches to take in children given the “likelihood of reduced adult-child ratios and existing challenges with recruitment and retention”, according to a department spokeswoman.

At the moment, child/carer ratios are strictly governed by regulations.

Minister for Children Katherine Zappone’s department is also planning to seek submissions from the wider childcare sector and parents early next week to offer “a final opportunity to share their views, experiences, practices and ideas” for getting children back to creches.

“DCYA is currently working with the sector to answer the many questions that exist,” a spokeswoman for the minister said.

“This is complex work and must balance a number of important issues.”

These issues include how to reduce the threat of Covid-19 given the difficulty of maintaining social distancing among young children and those caring for them, demand for childcare as the economy reopens and keeping the childcare sector afloat without parents having to pay higher fees.

“The minister hopes that every early education and childcare service around the country is currently considering how it can be part of helping Ireland get back to work, and how it can support children from June 29 in the very difficult circumstances they have experienced in recent months,” her spokeswoman said.

On Wednesday, Ms Zappone suggested childcare may operate using a “pod” system as it reopens, with small groups of children being looked after by the same carers in the same room, using the same toys every time they are there.

Under sixes would struggle with the concept of social distancing, making implementation difficult if not impossible, she pointed out.

Ms Zappone said Ireland would be “referring to the Norwegian model, among others” as she considered ways to limit interaction between parents and guardians, including children being collected from cars outside creches, as well as extended or staggered opening hours.

Ex-city defender Onuoha: I never felt safe in the US. If the police don't like it, you can lose your life
Barcelona wants to bring back 19-year-old Manchester City defender Garcia. The English are not going to let him go
Gianni Infantino: We must all say no to racism and violence. In any form
Barcelona for 4.5 million euros will buy 70% of the rights to 19-year-old forward Sao Paulo Maya
Martin Ødegaard: Sociedad wants to get into the Champions League is a dream. It's hard to fight Real Madrid and Barca, but we can fight the rest
Newcastle midfielder Longstaff is close to a move to Udinese. His salary will increase by more than 30 times
Milan defender Duarte was injured. This is the second injury at the club after resuming training
Source https://www.irishtimes.com/news/ireland/irish-news/parents-polled-by-government-on-practical-reality-of-reopening-creches-1.4261126

'Insane idea': MPs queue and complain after being forced return to vote in the House of Commons

Simon Harris: 'Racism disgusts me, but protests that don't support social distancing are not possible'

Quiz: How well can you do in this Leaving Cert exam?

Over 50 healthcare workers repatriated from India to Ireland

TUNE IN: Live performance from All Folk’d Up this Wednesday!

Your evening longread: A personal history of racism

Tragic discovery of a body in County Limerick town

Coronavirus: Speed limits to be cut to 30km/h across Dublin City Council roads

Focus Ireland ordered to pay €22,000 to 68-year-old 'humiliated' mediator for unlawfully retiring him

Debunked: No, some Penneys stores are not reopening on a trial basis this week

Counselling for musicians whose incomes have ‘fallen off a cliff’

There have been 88 incidents of spitting or coughing against gardaí

Two men remanded in custody after being charged with aggravated burglary

Explainer: The latest controversy threatening to cause a rift within the FAI

The Remote: Daniel at home, the Normal People finale and a classic Hitchcock flick - it's your weekly TV guide

Over 2,000 in Galway exit pandemic payment

Travel demand on public transport during Phase One has been higher than expected, says NTA

Pipe bomb in Limerick bin was made from dud fireworks

Timeline: How the death of George Floyd led to violent protests and a Trump threat to deploy the military

Man in his 60s dies in single-vehicle crash in Mayo

Cian English’s funeral will be held in Brisbane, with further service in Carlow

Greens, FF and FG to meet today for plenary session on programme for government

Explainer: The 213-year-old law Trump may invoke to deploy military troops in US states

Reducing social distancing to 1m ‘could double risk’ of infection

‘A gateway to normality’: Dublin Zoo reopens after three months

‘Practically every window smashed’ in attack on home

Number claiming pandemic payment drops by 36,000 in a week

Coronavirus: Public urged to stick with ‘tough’ restrictions to allow phase two to proceed next week