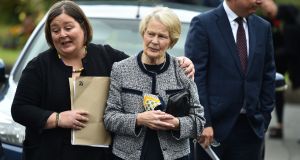 It is not only John Hume who has secured his place in the history of this island, Fr Paul Farren told mourners at his funeral on Wednesday, but also his wife Pat.

“When the history of Ireland is written, if Pat Hume’s name is not beside John’s, it will be an incomplete history,” he said in his homily.

There seems little chance of that. They had been a partnership for 60 years; she was a constant presence, from her role as the manager of his constituency office in the early years to his advocate and protector during the final years of his illness.

“She was with John in everything,” said the SDLP leader, Colum Eastwood. “In the first election he fought, Pat was by his side, and when John was away, somebody had to be here, running the constituency office, looking after the house and the children, and anybody who needed help.

“The people of Derry see her as a saint, and she contributed an enormous amount to the peace process in Ireland.”

John met Pat in Borderland, one of the famous “ballrooms of romance” just over the Border from Derry in Co Donegal and the “starting point for many a Derry family”, as their son John Jr noted.

They married in 1960, and enjoyed “a December honeymoon in a freezing B&B in Gardiner Street in Dublin. Thankfully for Mum, the quality of the accommodation got better as the marriage went on.”

Yet Pat often had her work cut out. “None of us remember him changing nappies, or indeed putting many – any? – dinners on the table,” John Jr recalled.

But it was both his parents, Pat as well as John, whom he credited for teaching “us all our values and [giving] us all our moral compass. And for that we will be forever in their debt,” he said.

So too are many others. Local people watching the funeral from outside the cathedral gates were keen to remember Pat as well as John. One woman described how she had been a pupil of Pat’s; another was a friend. “Pat Hume is a great lady,” was an oft-repeated remark. “Pat Hume did so much,” said another. “The Derry people know that, and remember that.”

So too did Fr Farren remember her in his homily; prayers were offered “especially for you, Pat”.

She had “stood behind John to defend him and support him”, Fr Farren said, and “beside him to love him and accompany him even in the most difficult times and when his health failed and his mind got weaker she walked in front of him to lead him”.

“Pat encircled John with love, compassion and support and it was your presence that made his work possible.”

Tottenham want to buy Skrinjar. Inter demands 60 million euros
Barcelona agreed to transfer desta for 20+5 million euros with Ajax
Villarreal bought defender Cuenca from Barca for 2.5 million euros and loaned to Almeria
Inter striker Esposito goes on loan to SPAL
Frank de Boer will lead the Netherlands national team. Contract - for 2 years
Dynamo Stavropol about the match with Rotor: Transfers in the Russian Cup are prohibited. The RFU said that there is no way back
Maccabi entered the Champions League without 11 players due to covid. UEFA allows you to play if there are 13 players from the application
Source https://www.irishtimes.com/news/ireland/irish-news/pat-hume-did-so-much-derry-people-know-that-and-remember-that-1.4322997

My week in wellness: A 45-year-old with two young kids in Dundalk who wants to be more active

Limerick weather: Cool and bright but heavy showers can be expected

Should you consider a postgrad during the pandemic?

How to identify and develop soft skills in a pandemic

'The day of the water cooler chat is gone'

Wealthiest homeowners to gain most from property tax cuts

Plan to build thousands of homes in Limerick

Obesity linked to hospitalisation and ICUs for Covid-19 patients

‘Stepping into the working world was a notable jump’

Ireland’s top earners ‘do not see themselves as rich’, study finds

New round of Sports Capital Programme to be announced shortly

The top 10: Irish writers at their best

Your evening longread: 'I couldn't move my legs - I knew my life would change forever'

The Remote: Bake Off's return, the Irish War of Independence and getting up on Schitt's Creek

'In some ways, he was somebody who was desperate to be loved by everybody'

Q&A: How do new Covid-19 restrictions in the UK differ from Ireland?

It would be unfair to restore PUP for one cohort of workers and not others, says minister

'I think with GAA matches taking place, hopefully the winter months will slip along without us noticing'

Coronavirus: No further deaths and 334 new cases confirmed in Ireland - including 174 in Dublin

Saoirse Ronan and Kate Winslet get rave reviews for "Ammonite"

Could hemp and a return to our roots be the answer to Ireland’s farming prayers?

Independent inquiry to be held into 1976 death of Seamus Ludlow

Limerick TD pays tribute to the ‘James Bond of Philanthropy’