The UK government’s proposed bill to deal with Northern Ireland’s troubled past is “perpetrator-friendly and perpetrator-focused”, the head of a victims’ group has said.

Sandra Peake, of the Wave Trauma Centre, said victims and survivors are fearful of the ramifications of the proposed immunity for information deal which has been mooted.

The Northern Ireland Troubles (Legacy and Reconciliation) Bill envisages offering immunity from prosecution to people who are deemed to have co-operated with the information retrieval body.

Criminal prosecutions could still take place for those who do not.

It seeks to establish an Independent Commission for Reconciliation and Information Recovery (ICRIR) to review deaths and other incidents.

However, the tweaked bill has been opposed by the majority of victims’ groups and political parties.

It passed its second reading last month with the support of Conservative MPs, but was not backed by any of the Northern Ireland MPs.

More than 3,500 people were killed during the Troubles, including some 1,000 members of the security forces.

Giving evidence to the Northern Ireland Affairs Committee, Ms Peake said there has been “a huge disrespect to those who paid the ultimate price”.

She described victims as “fearful for what is going to come”.

“They’re fearful that people will get immunity and approach them,” she told MPs.

“There’s an intimacy of violence in Northern Ireland that is seldom understood, that sometimes the people who are the perpetrators are living in the next street or they see you at church or at the shops and they wink at you, they jeer at you, they let you know they are still there – and that is before any immunity comes.

“There is a fundamental issue here that is deeply unfair to victims and survivors, and that concept of fear is very real for people today and then that plays into how government treat them, because if there is lack of information, speculation, and this is drip-fed, this becomes very difficult and wholly unacceptable for victims and survivors. 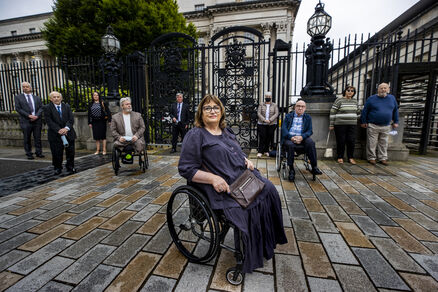 Jennifer McNern and other members of the Wave Trauma Centre. Picture: Liam McBurney/PA

Ms Peake said victims are also scared that, once granted immunity, perpetrators will embark on lecture tours and write books about their pasts.

He referred to the case of a victim who lost a leg in an under-car bomb who was “ridiculed daily” by the person responsible.

Victims Commissioner Ian Jeffers said many in the sector felt their engagement with the Northern Ireland office on the bill was a “transfer of information” rather than a consultation.

In an earlier session, Northern Ireland Human Rights Commissioner Alyson Kilpatrick said the main aim of the bill is to channel all investigations, prosecutions, civil claims, inquests and police complaints into one body, and expressed concern that the investigations are being turned into reviews.

She described a “very substantial interference with the rule of law”, and also voiced concern at the lack of distinction between crimes for which a person can be granted immunity, including murder, kidnap, rape and torture.

“On its face, it clearly isn’t [human rights-compliant], it’s clearly in breach of the Human Rights Act.

“We have gone through this Bill in real detail, piece by piece and also as a whole, to see whether there is anything redeeming in it that could be made compatible or could save this bill from being found to be incompatible.

“We cannot see a way in which the bill can be made compatible when taken as a whole.”