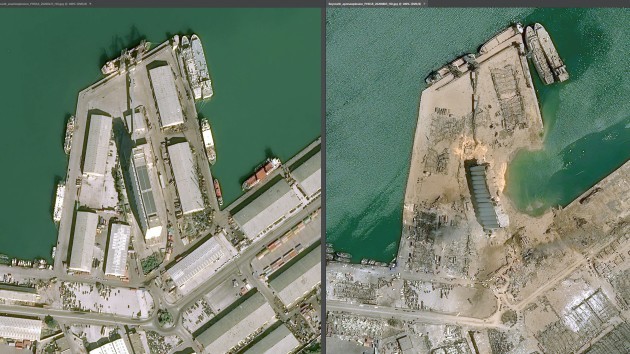 INVESTIGATORS BEGAN SEARCHING the wreckage of Beirut’s port for clues to the cause of the massive explosion that ripped across the Lebanese capital as the government ordered port officials put under house arrest.

International aid flights began to arrive, as Lebanon’s leaders struggled to deal with the aftermath of yesterday’s blast, crippled by an economic crisis and facing a public where many already blame chronic mismanagement and corruption among the ruling elite for the disaster.

The explosion at the port killed at least 100 people and wounded thousands.

Hospitals were overwhelmed, one that was damaged in the blast had to evacuate all its patients to a nearby field for treatment.

Buildings were damaged for miles around the city, and Beirut’s governor said today that hundreds of thousands might not be able to return to their homes for two or three months.

Meanwhile, an official letter surfaced online showing that the head of the customs department had warned repeatedly over the years that a huge stockpile of ammonium nitrate stored in a hangar in the port was a danger and asked for a way to remove it.

Ammonium nitrate is a component of fertiliser that is potentially explosive.

The 2,750-ton cargo had been stored at the port since it was confiscated from a ship in 2013, and yesterday it is believed to have detonated after a fire broke out nearby.

The resulting explosion, hitting with the force of a 3.5-magnitude earthquake, was the biggest ever seen in Beirut, a city blasted by a 1975-1990 civil war, bombarded in conflicts with Israel and hit by periodic terror attacks.

The 2017 letter from the custom’s chief to a judge could not be immediately confirmed.

If authentic, it could deepen the belief already expressed by some Lebanese that widespread mismanagement, negligence and corruption among the country’s ruling class is to blame for the explosion.

President Michael Aoun vowed before a Cabinet meeting today that the investigation would be transparent and that those responsible will be punished.

“There are no words to describe the catastrophe that hit Beirut last night,” he said. 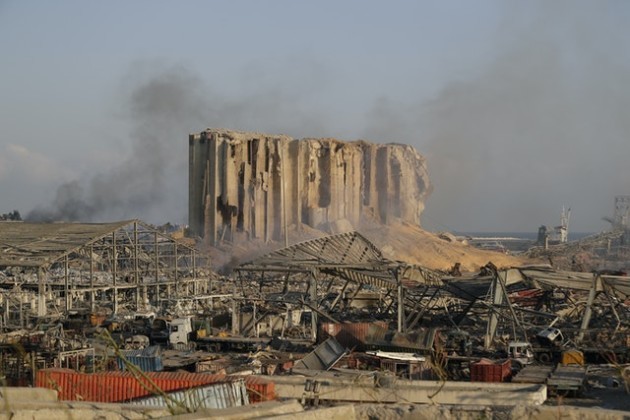 Damage is seen after a massive explosion in Beirut, Lebanon. Source: Hassan Ammar/AP

After the meeting, the Cabinet ordered an unspecified number of Beirut port officials put under house arrest pending an investigation into how the ammonium nitrate came to be stored at the port for years. The government also declared a two-week state of emergency, effectively giving the military full powers during this time.

State prosecutor Ghassan Oueidat ordered security agencies to start an immediate investigation and collect all reports and letters related to the materials stored at the port as well as lists of people in charge of maintenance, storage and protection of the hangar.

It also promised compensation for the victims.

With the Port of Beirut destroyed, the government said imports and exports will be secured through other ports in the country, mostly in the northern city of Tripoli and the southern port city of Tyre.

Residents of Beirut confronted a scene of utter devastation today.

Smoke still rose from the port, where a towering building of silos was half destroyed, spilling out grain.

Hangars around it were completely toppled.

The blast knocked out a crater some 200 metres across that filled with seawater, it was as if the sea had taken a bite out of the port, swallowing buildings with it.

Lebanon was already on the brink of collapse amid a severe economic crisis.

Many have lost their jobs and seen their savings evaporate because of a currency crisis.

Food security is a worry, since Lebanon imports nearly all its vital goods and its main port is devastated.

The government is strapped for cash.

Lebanon’s economic crisis is rooted in decades of systemic corruption by political factions that exploit public institutions for the benefit of their supporters.

French President Emmanuel Macron was to travelling to Beirut on Thursday to offer support and meet with Lebanese leaders. Lebanon is a former French protectorate and the countries retain close political and economic ties.

Gotze on the wrong decision to return to Borussia: Things didn't go as I expected
Fans thought it was absolutely sensational that a football player could get on a train. And partly because he could read. Norwegian from the Premier League destroys myths
Paolo Maldini: Zlatan is an ageless all - rounder who always decides the outcome of the match
Suarez wept at a farewell press conference in Barca
Lukaku on 2:3 with Sevilla in the Europa League final: It was a difficult moment. I haven't spoken for 4 days
Di Maria about Messi's desire to leave Barca: immediately wrote to him on instagram, how PSG will play with him
Paul Parker: Maguire is the captain of Manchester United only because of his $ 80 million price tag
Source https://www.thejournal.ie/port-officials-under-house-arrest-after-explosion-in-lebanons-capital-5168850-Aug2020/